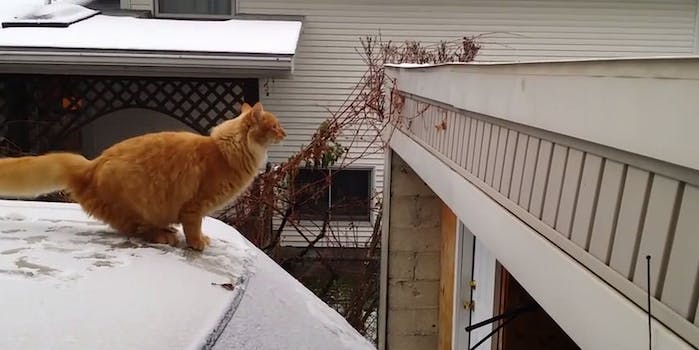 No, you cannot has coordination.

No, you cannot has coordination in the snow.

Waffles, a plump orange tabby, is quickly becoming the Internet’s latest beloved feline. A 20-second video of the cat attempting—and failing—a jump from a snow-covered car onto a ledge is quickly gaining traction (unlike Waffles). The YouTube video has received over 2,500 views since being posted on December 15.

Reddit has already turned the video’s money shot into a GIF.

Don’t worry about Waffles. In the video, he can clearly be seen walking around on the hood of the car, a little dazed but no worse for the wear.

It’s probably safe to say that Waffles won’t be attempting this jump again until the snow thaws, lest his owner rename him Pancakes.