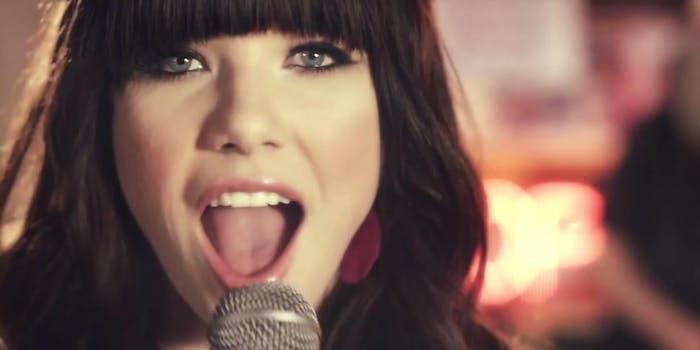 Carly Rae Jepsen made the best pop album of the year—but it’s likely you’ll never listen to it.

On Thursday, Carly Rae Jepsen is set to release the best pop album of the year—but it’s likely you’ll never listen to it.

Three years after “Call Me Maybe” took over the Internet—following a signal boost from Justin Bieber on Twitter and ubiquitous YouTube tributes to the bubblegum tune—“I Really Like You,” the first single from E-MO-TION, stalled on American radio. What looked ready to be yet another inescapable No. 1 smash (this time with an assist from Tom Hanks, who appeared in the video) barely cracked the Top 40. Subsequent single “Run Away With Me” fared even worse, despite being hailed as a “big, bold, beautiful masterpiece” and “the song of the year.” To paraphrase Jepsen herself, it really, really, really is.

Nearly every track from the record has received hyperbolic, heaving-breath praise upon release: Stereogum called “Warm Blood” “indisputable, unfuckwithable pop genius,” Pitchfork referred to “All That” as a “tour de force,” and the Verge called “Your Type” “truly great,” yet they all appear to be non-starters in the U.S.—as overlooked as “Call Me Maybe” was zeitgeist-defining. A comment from Cosmopolitan’s Laura Beck indicates why. In her review of “Run Away With Me,” she writes: “This song is legitimately making me fearful I’ll never hear another thing in my brain until I die.”

Even the highest praise for the 12 tracks from E-MO-TION appears to come with that same warning label, as if another “Call Me Maybe”-size success were a reason to batten down the hatches or take refuge in a bunker somewhere. While writing the most beloved pop song in recent memory might land her a spot in the record books, it also illustrates the perils of ubiquity in the Internet age. “Call Me Maybe” wasn’t just the best song of 2012; it was incredibly, unbearably, oppressively, exhaustingly great. It’s as if the Internet loves Carly Rae Jepsen so much it hopes she never releases another song ever again—for the sake of everyone’s collective sanity.

Carly Rae Jepsen appears to be burdened with a similar affliction to “Song of the Summer syndrome,” in which artists who win the yearly race to take over radio during the summer months often struggle after hitting it big.

While the Sisyphean struggle of the one-hit wonder is well-documented, that doesn’t exactly apply to Jepsen. The Owl City-collaboration “Good Time” reached the Top 10 in 17 countries, and “I Really Like You” proved a modest worldwide performer. Instead, Carly Rae Jepsen appears to be burdened with a similar affliction to “Song of the Summer syndrome,” in which artists who win the yearly race to take over radio during the summer months often struggle after hitting it big. In a recent piece for Bloomberg, Devin Leonard explains that such has been the case for acts like LMFAO, Robin Thicke, and Iggy Azalea—all of whom have failed to replicate the success of their marquee smashes.

Although they don’t have the same overwhelming critical acclaim as Jepsen has enjoyed, LMFAO is a strikingly similar case. “Party Rock Anthem” was the very loaded definition of an “earworm,” the ultimate damning praise for an artist. It’s a song you just can’t escape, even if you tried. The song topped Billboard for six weeks, en route to become the fifth most-successful song in chart history. In addition to lingering on the chart for 68 weeks, the frat-friendly tune became the third biggest-selling digital song ever. Its persistence was so frustrating that the pop duo was destined to never really recover: After another brief trip to the top of the charts with “Sexy and I Know It,” band members Redfoo and Sky Blu parted ways.

“Call Me Maybe” boasts equally impressive chart credentials: The song sailed to the top 10 in 31 countries, while becoming the best-selling single of the 21st century from a female musician. As of July 2015, Jepsen pushed 18 million copies of her signature tune, but it had an ever bigger impact online. While Taylor Swift’s “You Belong to Me” showed how much the Internet can boost a song’s impact, perhaps no other song in history has been such a product of the viral Internet as Carly Rae Jepsen. In summer 2012, she wasn’t so much a pop artist as living clickbait, giving everyone from the U.S. Marines to Katy Perry’s posse a chance to sing for your attention.

The Guardian appropriately called the memeifcation of “Call Me Maybe” “virulent,” illustrating the dark side of going viral—people want to click content until they can’t possibly bear to click it one more time. Psy, the singer behind 2012’s “Gangnam Style,” was seemingly designed to become a meme. When that song debuted in the U.S., it was the Internet’s answer to the “Macarena,” not so much a song as the original definition of a meme, as outlined by Richard Dawkins: “an idea of a unit of cultural transmission.” Psy became an idea on which to attach meaning, which is why he became the biggest meme since Conspiracy Theory Keanu. The image of a rockabilly K-Pop star with a pompadour dancing like a rodeo clown was too good to resist.

While Taylor Swift’s “You Belong to Me” showed how much the Internet can boost a song’s impact, perhaps no other song in history has been such a product of the viral Internet as Carly Rae Jepsen.

In that sense, taking three years off in between the success of “Call Me Maybe” and the release of E-MO-TION was exactly the right move for Carly Rae Jepsen. During the intervening years, the 29-year-old Canadian singer took time off to play the lead in Rogers and Hammerstein’s Cinderella, while writing a reported 200 songs to avoid making the same mistake as 2012’s Kiss. Producer Scooter Braun quickly threw together the record to capitalize on Jepsen’s Internet fame, and E-MO-TION learns from that mistake: Jepsen worked with indie talents like Vampire Weekend’s Rostam Batmanglij and Blood Orange’s Devonté Hynes to make a record that’s often defiantly uncommercial.

But most of all, E-MO-TION feels just defiant—the sound of an artist coming into her own. The album succeeds on its own glorious, ’80s-inspired terms. If Braun and Jepsen found out the hard way that it’s next to impossible to recreate a meme, what’s so thrilling about E-MO-TION is that they stopped trying. The album might be DOA when it comes to sales, but three years after “Call Me Maybe” killed Carly Rae Jepsen’s career, the one that’s rising from the ashes is even better.