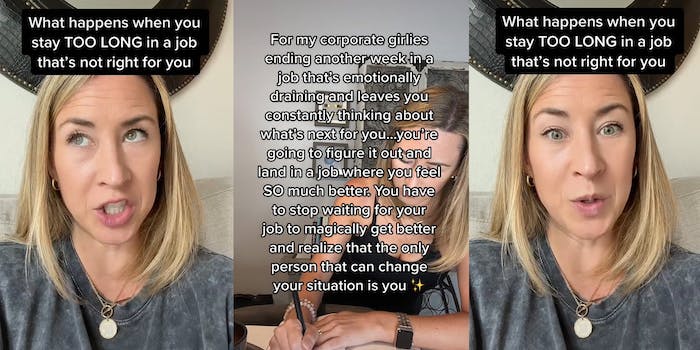 ‘You are describing my exact situation’: What happens when you stay too long in a job that’s not right for you, according to a career coach

'These are my exact thoughts.'

Career coach @jennakgreco posted a now-viral TikTok urging folks who are feeling unmotivated in their current positions to take action in order to prevent the “fear spiral” that keeps so many of her clients stuck in jobs that they don’t love.

In the video, she breaks down the “cycle” of self-doubt and apprehension that often keeps many “Type A personalities” and other employees in roles that they aren’t passionate about. She delineates that a lack of motivation often leads to mitigated on-the-job performance, which then leads to doubt about one’s abilities, which in turn leads to worry that if they aren’t able to “kill it” in their current job, then they begin to question whether or not they’d be able to secure a new role, as they don’t feel competent enough to tackle a new gig. This, in turn, keeps many people in a proverbial rut.

@jennakgreco It’s easy to focus on the pain of making a change, but what about the pain of staying? #burnout #confidenceiskey #corporatemillennial #careertok ♬ original sound – Jenna – Career Coach

She begins the video by stating: “[The] thing we’re not talking about enough but is such a real problem for my corporate girlies that are stuck in jobs that are draining them and don’t know what they want to do next, but don’t want to stay in the job that they’re in.”

She continued, “And I know because this happened to me and I see it with all my clients. Burnt out and drained and over the work that you’re doing you start to lose your motivation. When you start to lose your motivation, you’re not trying as hard. And for a lot of my clients, they’re Type A over-achievers, have always been really good at what they do. So when you’re not trying as hard you start to feel like ‘I’m not even that good at what I’m doing. I’m not doing as good of a job as I know that I could.'”

The TikToker continued, “you start to spiral. You start to lose confidence in yourself. And then you start to think, ‘Well maybe I’m just not that good in general. Maybe I don’t have that much to offer? How am I even gonna get another job, if I’m not even good at the job that I’m doing right now?’ And you start to have this fear spiral and self-doubt that keeps you stuck.”

Jenna concluded by saying: “Also putting in place the boundaries and being in the right culture, that keeps you from feeling drained. Keeps you from burning yourself out and gives you the ability to have the life that you want. Both at work, and outside of work. And if you’re relating to this and you feel this way in your job, then this is your sign to do something about it. To stop the spiral. To get yourself out of it and start taking action to figure out what do you want to do next? And take the steps to help you get clear on that. And get into a new job so you can start living the life that you deserve.”

Motivational Speaker Dean Bokhari states that “action leads to motivation (not the other way around.)” There are plenty of articles and think-pieces, as well, on motivation being sustained through choices to take action. Many articles that chronicle the habits of successful individuals all hinge on making oftentimes uncomfortable choices, even while unmotivated, in order to inspire oneself to do more under virtually any circumstance, such as waking up early to exercise, holding oneself to the fire to finish projects and tasks by deadlines, and generally following through.

However, there is also commentary from industry professionals and outlets that focus on career transitions that speak to employees “outgrowing” particular jobs. The lack of motivation in these instances could be directly tied to an uncomfortable truth: that you aren’t challenging yourself. So being able to “ignite” motivation through work when all of the work duties and tasks presented to you no longer present a challenge would only further put one into the “spiral” that Jenna is referring to.

Many TikTokers agreed with Jenna’s post and felt that she was directly speaking to them, with some sharing their own success stories of deciding to “break the cycle” and doggedly pursue opportunities that bring them closer to their own life goals.

One user said, “Omg these are my exact thoughts I thought I was just the worst and am in that spiral.”

Another added, “This was me 3 months ago – I made the leap and don’t get me wrong it was scary and it’s ugh being the newbie again but IM SO HAPPY.”

A third shared, “You are describing my exact situation.”

One user teased, “There is literally no way tiktok doesn’t listen to conversations bc I was JUST saying this is how I feel hours ago.”

Another shared, “I started doing so average recently & I’m so over it that I asked for a 50% raise bc I feel like I have nothing to lose anymore.”

One user joked, “not my FBI agent trying to give me a sign through my FYP.”