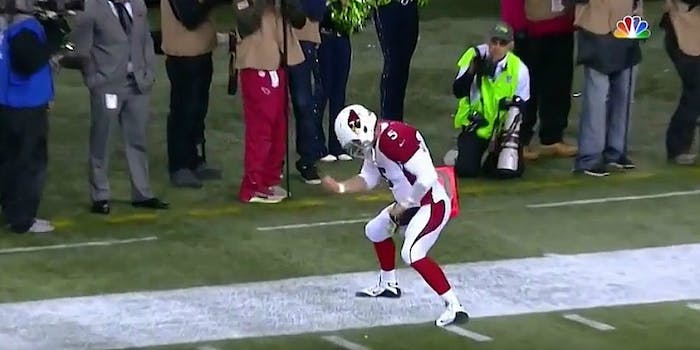 Drew Stanton is a backup quarterback for the Arizona Cardinals, and over the course of his eight-year career, he’s played in just 23 games. But almost certainly the biggest impact he’s made this season—and the thing that will survive on the Internet long after he’s retired—is the move he pulled after Arizona running back Andre Ellington’s 48-yard touchdown run sealed a victory against the Seahawks on Sunday night.

It’s unclear if there’s a name for Stanton’s routine, so we’ll just call it awesome.

Favorite part? The ending. When, despite using up all that energy with his arms waving and his legs pumping down the sideline, Stanton still finished with a Rockettes-like straight-legged kick to punctuate the effort.

Not to be outdone, Panthers quarterback Cam Newton also showcased his dancing. And did fantastically trolled the Titans in the process.

Here’s the explanation from Newton.

Cam on angering Titans: "I'm a firm believer if you don't like it, keep me out (of the end zone)."

As for Stanton, here’s what USA Today reported from the postgame locker room.

“He’s been working on that for a while,” starting quarterback Carson Palmer said, intercepting a question from USA TODAY Sports.

So what was the move?

“You can’t even explain it,” Stanton said. “It was just raw emotion. I don’t know.”

“Not limiting it to any one dance,” Stanton said.

“It’s not premeditated,” Palmer said. “It just happens. You can’t explain it.”

As for Sunday’s dance-off winner? Give points to Newton for his trolling and points to Stanton for his spontaneity and creativity. Overall, though, it’s a draw—so let’s hope for a rematch between the two next week.