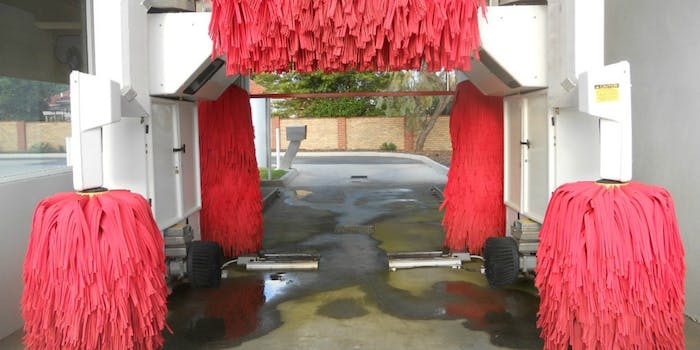 Car-wash manager somehow emerges unscathed after scrubber sucks him in

This accident could have been deadly.

While car wash attendant didn’t make the most recent list of the world’s deadliest jobs, perhaps it should have. The video below shows just how dangerous this job can be.

While the video looks humorous—the manager of the Slidell, Louisiana, car wash, Josh Hood, looked like he was engaged in an extended waltz with one of the car-wash brushes—it wasn’t so funny to Hood at the time. The hose he was using wrapped around him like a boa constrictor when he got caught up in the scrubber.

“It was scary. I was in the military, and it was scarier than anything I had been through in the military,” Hood told RightThisMinute. “I thought I was going to hit the steel poles around it. But luckily, I didn’t hit them.”

Hood said he didn’t suffer any injuries, except for a case of road rash on his knee, and the car wash wasn’t affected, either. Afterward, he maintained his sense of humor.

“I’m now in the safety what-not-to-do videos,” he said.

And remember, the outcome could have been much worse.