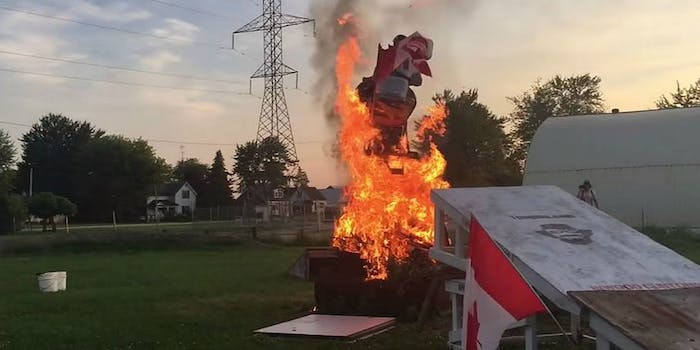 Rowdy Canadians jump a go-cart through a flaming backyard bonfire

Among all the stupid things you could film yourself doing in order to produce a viral YouTube video, jumping through fire seems like one of the dimmer ideas. Mostly, because fire is hot and it can burn you real bad and scar you real good.

But the crazy Canadians featured below don’t seem worried about any of that as they put one of their colleagues on some kind of motorized go-cart (what one Redditor described as a redneck lawn chair) and sent him hurtling through flames. It’s an impressive stunt of gutsy ridiculousness from six different camera angles.

No matter what you think of the stunt, that was an impressive landing, especially as shown by the third camera angle where you can see how easily the go-cart could have gone sideways and tipped over (which wouldn’t have been as bad as being set on fire, but probably wouldn’t have been pleasant).

Yet, my favorite part of the entire video was just after the rider lands successfully, one of his buddies yells out, “You’re not even on fire, dude!” That more than anything else means this particular day was a pretty damn good one.