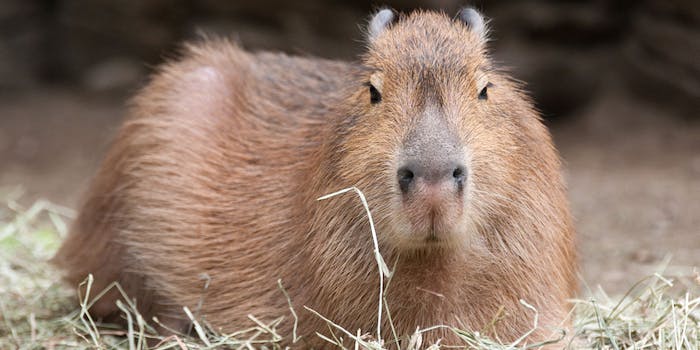 Capybara captured in Toronto a month after escaping with its lover

Bonnie and Clyde almost got away with it.

The second of two capybara lovers that escaped in late May has finally been captured.

Our furry fugitive found itself tricked by fruit and corn in a spring-loaded trap put out by Toronto’s High Park Zoo’s staff near the pond area. A pair of capybaras had gotten away on May 24 during a transfer from Ontario to the facility. They are expected to eventually mate with one another and join High Park’s veteran capybara, Chewy.

Their getaway last month caused a massive hunt for the duo. While staff initially tried tracking down the mammals in search groups, they eventually turned to the more passive method of laying out traps. The first capybara was recovered on June 12.

The search for the capybaras inspired #CapybaraWatch, as people tweeted jokes and updates about recovering the couple. Once capybara No. 2 was captured this week, the Toronto Parks, Forestry, and Recreation tweeted a picture of the critter in its cage.

Thanks to our dedicated Parks staff who never gave up, brought capys home safe and healthy. #CapybaraWatch #TOpoli pic.twitter.com/dKn1vukEvZ

Their motive for running away is still unclear. The arranged rodent marriage might have been part of it.

H/T The Global and Mail