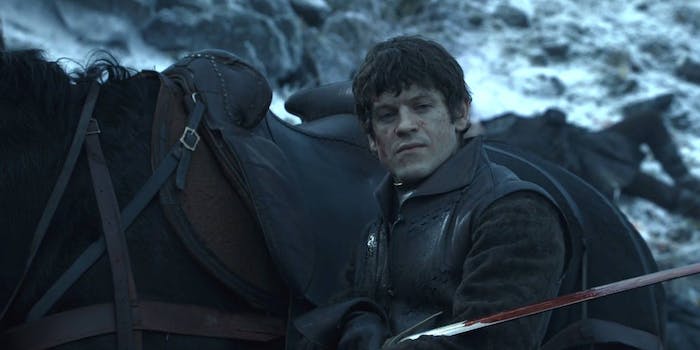 Dear Ramsay Bolton, you must die.

How’s it going? I know you’ve been busy, what with murdering your father, stabbing Osha in the neck and threatening to scoop out Jon Snow’s eyes if he doesn’t turn over Sansa Stark. But, I was hoping we could have a little chat. Not face-to-face, obviously, because I don’t want you to flay me alive. I have a little question to ask you.

Ramsay, your time on Game of Thrones needs to come to an end. We all know it’s time. There are plenty of theories about how it will happen. It could be the #BastardBowl with Jon Snow, Sansa, even Smalljon Umber. (Even the actor who plays you, Iwan Rheon said he hopes you get barbecued by dragon fire.) You’re in the credits for the next three episodes at least, so clearly HBO is milking your demise for all it’s worth, but you know and I know this whole thing has to stop.

Ramsay, I loved your arrival in Season 2. Really, we all did. You presented yourself as the Joffrey of the North, a uncontrollable sociopath who was as unpredictable as he was deadly. You had your reasons, being a bastard conceived by rape, but you embodied chaos. After the Ironborn betrayed Theon Greyjoy at Winterfell in Season 2, you didn’t care about Robb Stark’s promise of mercy. You flayed them alive, just like you did with the Ironborn at Moat Cailin in Season 4. That’s cool, flaying people is kind of your thing.

Those weren’t the only examples of your cruelty. You spent hours convincing recent captive Theon Greyjoy that you were actually his rescuer. You “saved” him from attempted rape and got him to confess his deepest, darkest secrets before revealing it was all a ruse. Afterward, you tortured Theon to the point where he lost everything, even his identity. Theon Greyjoy will never be the same, thanks to you. And for what? I’m pretty sure there was no real reason, but you didn’t need one. You were Ramsay Snow. You hunted women in the woods.

But then, you became Ramsay Bolton. You went from a bastard with something to prove to a man with power, and it just isn’t interesting.

When Joffrey became king at the end of Season 1, we saw how power could corrupt a chaotic person. Joffrey lashed out to show his might, murdering prostitutes with arrows, but in the end he was crushed under the weight of his own crown. Joffrey was murdered because he was a weak ruler hiding under the facade of strength. It made for a fascinating character journey.

But you simply became more evil. Power didn’t corrupt you, it enabled you to do more of the same crap you’d already done for three seasons. As a result, the writers have struggled with ways to make you more evil. You kept on flaying. You threateningly looked at your father’s wife after you learned about a possible male heir. You sexually assaulted your concubine who probably would’ve had consensual sex with you in the first place.

And, of course, we have to talk about Sansa.

When the two of you got married, I hoped it would maybe usher in a more pragmatic, sensible Ramsay. Sure, you were evil, but maybe you were learning how to play the “game of thrones” a little better. Your father, Roose Bolton, supported the match, knowing it would connect your family to Stark’s allies. That’s something you desperately needed, given the whole Red Wedding thing.

Sansa was a valuable asset, the key to keeping your claim in the North. And you raped her.

What on earth were you thinking, Ramsay? Were you trying to make the audience hate you, even more than they already did? Well, great job. I can’t tell you how sick I am of the “rape as motivation” plotline for female character growth, and you’re now a prime example of that. I hope you’re happy, Ramsay. You’ll be in “Women in Television” textbooks for years to come.

You went from a bastard with something to prove to a man with power, and it just isn’t interesting.

Plus, this is a Stark we’re talking about. They’re some of the most resilient people in Westeros. Did you think she was just going to submit, that you were going to be able to break her like you did Theon Greyjoy? Big mistake, man. Now she’s gone, and you’ve got thousands of wildlings at your doorstep, ready to pounce. All because you don’t know how to be smart, you just know how to be evil.

Now that Season 6 has come around, you’re doing everything besides twirl an evil moustache. You killed your father, then five minutes later you summoned his wife and baby to be eaten alive by wolves. You threatened the Umbers after they refused to bend their knee to you. Finally, in the latest episode you stabbed Osha to death, for no reason other than the writers needed you to kill someone. Because that’s all you do now, Ramsay. You kill people and wait for death.

I would’ve loved to see Ramsay Bolton become a key player on Game of Thrones, but instead you’ve become the black knight at Medieval Times. You’re not there to be interesting, you’re only around because the writers need someone for the audience to despise. So, for all our sakes, can you simply die and put us all out of our misery? We have to get ready for Uncle Euron from the Iron Islands.

Your time is up, Ramsay, and the sooner you accept your fate, the better. Come and see.