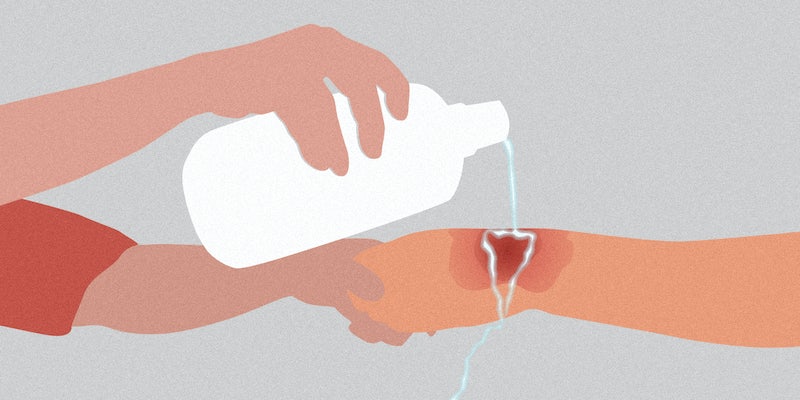 The icy history of the ‘apply cold water to burn’ meme

This is going to sting.

The first thing you should do when you accidentally burn yourself—whether it’s by touching a hot curling iron or brushing up against scalding kitchen pan—is to apply cold water. It helps numb the pain and limits the extent of the damage.

And the first thing you should do when you see someone get burned on the internet, of course, is to share the “apply cold water to burned area” meme. There’s no better or faster way of reiterating that someone got thoroughly owned than by posting some variation of the familiar image macro.

How did this idea originate, and when did it become a meme?

It’s become common parlance for disparaging jokes to be known as “burns.” The first example of a mean joke being equated to something fiery dates back to 1950, when the Friars Club in New York City held its first-ever “roast,” called such because it was the opposite of a “toast” or celebration. The idea of roasting friends became especially popular after the Friars Club began televising the events in the 1960s. Today, of course, they continue on in the form of the Comedy Central Roasts.

The slang of “burn” grew in the 1970s as a result of the roasts. In the early 2000s, the phrase re-emerged due to Ashton Kutcher’s character repeatedly using it on That ‘70s Show.

In fact, the word was added to Urban Dictionary in 2002 and gradually grew in popularity until it earned Word of the Day in 2005. Since then, “burn” has been a permanent fixture in the public lexicon.

So who was the clever person to introduce “cold water” to the phrase? According to KnowYourMeme, the burn meme first appeared May 12, 2012, in a FunnyJunk post by user oodlesandoodles with the accompanying text: “Hope they remembered to pour some cool water on that burn.”

However, the first truly viral meme version came two days later, when the burn treatment response image was instead paired with this screenshot:

The image was reposted to Reddit, 9gag, and The Lolbrary, rapidly spreading the meme. Since then, the “apply cold water” image has been paired with countless instances of “burn” examples.

The full phrase entered Urban Dictionary in 2013, with a definition provided by user “AsianInfestation”:

“When someone burns you, or you burn someone, some obnoxious person in the back would yell “APPLY COLD WATER TO BURNED AREA!” Because naturally, you or the other person just got burned… See roast or roasted . It’s basically just a stupid little statement to say to someone who just got burned by another person.”

Today, the meme is commonly used across every social hub on the internet. Searching the phrase yields results on every platform from Tumblr to DeviantArt to Imgur. On Facebook, for example, dozens of groups are dedicated to providing examples of burns in need of cold water, with the largest having over 18,000 likes. Wherever people are mean on the internet, you can be sure this meme won’t be far behind.

Here are just a few of our favorite examples:

May you never be burned in such a way that you need cold water.