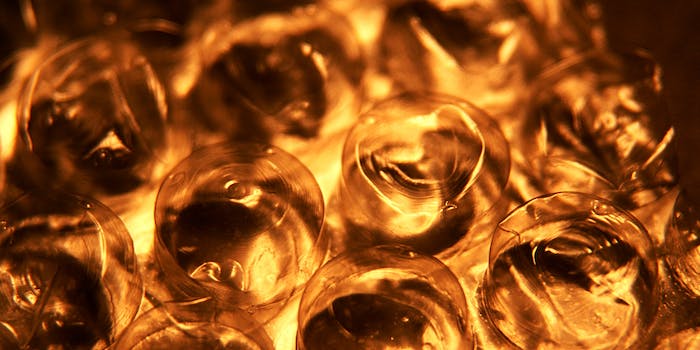 It's a dark day for Mother Gaia.

It’s a terrible day to be a kid at heart as one of our earliest sources of visceral, American fun will never be the same. A Wall Street Journal report revealed that Sealed Air Corp., the original company behind Bubble Wrap, will now be making new bubble wrap called iBubble Wrap. It’ll cushion your packages, but it will no longer perform its main, joyful function: Popping.

It's a sad, sad day in our nation's history. http://t.co/5XcLiMMDQP

I'm sorry Pringles but, 'Once You Pop You Can't Stop' is a way better line for Bubble Wrap.

What if they're going to take the pop out of bubble wrap by filling it with peas?

iBubble Wrap will be delivered flat to customers so it’s easier to ship and package together. Once it gets there you’ll need a large pump to inflate the bubble wrap, which will all be connected. The sale of bubble wrap is declining due in part to the competition of online retailers like Amazon, according to the report. And while bubble wrap isn’t going away entirely, we’re still hurting. After all, a child discovering bubble wrap is a thing of beauty.

In fact we can’t imagine a world without Bubble Wrap that sings, and we hope it will never truly die. So in-between sessions of popping some virtual b-wrap, here’s a friendly reminder of all the things we’ll be missing—let’s send it off with a snap.

1) Your pet discovering it

4) A source of insulation

5) The best birthday party ever

7) Clothing that can double as Baymax cosplay