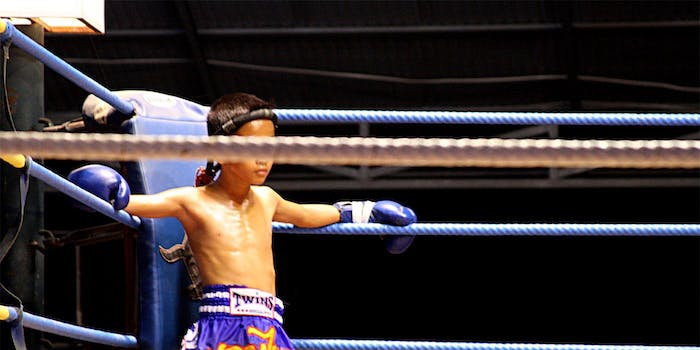 Across social media, he’s being hailed as “Bruce Lee’s lost son.” One look at this 31-second training video and you’ll understand why: This pint-sized fighter could break your shins.

After spotting the video above on Reddit, I couldn’t track down any identifying information about the fighter. All of the clips circulating are copies of copies, far removed from the original source.

But the kid appears to be training in muay Thai, a form of mixed martial arts that has a storied 700-year history in Thailand. It’s a fierce sport, one that finds competitors to strike using their fists, elbows, knees, and feet at blink-and-you-miss-it speeds. Muay Thai is currently pushing to for acceptance by the International Olympic Committee.

An ESPN investigation from last year, however, exposed the sport’s complicated and longstanding dark side, with poverty-stricken children as young as 7 training for full-combat adult entertainment. It’s a matter of local and national pride, and for many in the more rural areas of the country, an important part of the local economy. The practice goes back to the 1960s, a local scholar told ESPN, while a 2009 study estimated that there are roughly 20,000 fighters under the age of 15.

“For every muay Thai boxer and for many ordinary Thais, muay Thai rings are culturally sacred domains, traditionally reserved for men and their fight for masculine dignity,” wrote the late Dr. Pattana Kitiarsa in his 2003 paper, “Thai Boxers as National Heroes.” Fierce, full-contact strikes in muay Thai, which are considered brutal or devastating by many foreigners, are highly valued as the core symbols of the ‘true game of true men with dignity and pride’ by the Thais.”

One thing’s certain: This kid is not one to mess with.