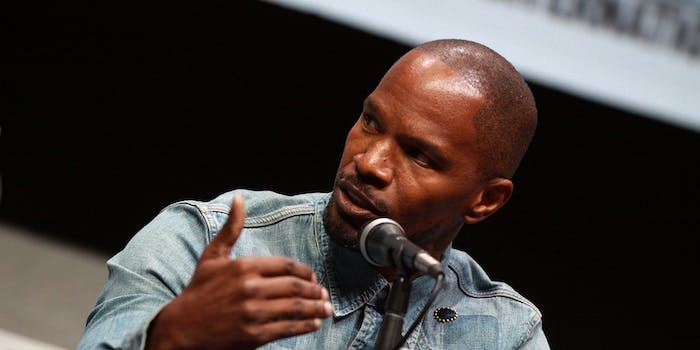 On Sunday night, Jamie Foxx may have taken viewers at the iHeartRadio awards aback with his joke about Bruce Jenner. Foxx quipped that Jenner “will be here doing a his and hers duet by himself,” before adding: “I’m just busting your balls while I still can.” This Monday’s Comedy Central roast of Justin Bieber also provided a stage for many jokes at Jenner’s expense: Kevin Hart, Jeff Ross, and Will Ferrell all mocked Jenner’s transition, with Ferrell going so far as to refer to Jenner as a “Hollywood hermaphrodite.” Twitter was not amused.

Wait….so Jamie Foxx said a Bruce Jenner joke and is getting all this flack…didnt Kevin Hart do the same?

It bothers me that all these comedians think it's okay to make transphobic jokes about Bruce Jenner. It's not funny.

come on world. do not make Bruce Jenner jokes. there is no reason. you're not funny and there's nothing to joke about. #justinbeiberroast

The jokes were nothing new, as trans people are thoroughly accustomed to being treated as punchlines for comedians looking for a cheap laugh. It’s conventional wisdom that sitcoms will inevitably air an episode mocking trans people as such, and it’s easy to see why with examples all the way from South Park to the Big Bang Theory going out of their way to mock trans people. In fact, Two and a Half Men aired an entire episode about Charlie’s ex-girlfriend, who had transitioned since their relationship ended; the joke was, of course, how wacky and gross it was.

These jokes show that society has a lot of catching up to do when it comes to treating transgender people with respect and dignity. It would be nice to watch a comedy, relax, and not have to brace myself for a poorly crafted punchline that uses the existence of trans people as the butt of a joke.

These jabs come at a time when transgender people are making substantive gains in legal protections, though not without significant hurdles.  In December, the Department of Justice finally announced that it will interpret Title VII to include gender identity within the law’s prohibition on workplace discrimination on the basis of sex. According to Attorney General Eric Holder, that means “the protections of the Civil Rights Act of 1964 [will] be extended” to transgender employees.

The Department of Justice’s intervention likely resulted in the resolution of litigation against Saks and Co. over the firing of a transgender employee. More recently, the DOJ itself filed a lawsuit against Southeastern Oklahoma State University, claiming that the University discriminated against a transgender employee and retaliated against her for complaining about the discrimination.

The last of these, requiring employers to provide access to appropriate restrooms, locker rooms, and similar sex-segregated facilities, continues to be controversial. That is likely because, as revealed by the jokes made at the expense of Jenner, public attitudes towards transgender people are still startlingly retrograde. In an op-ed for the Los Angeles Times, Jennifer Finney Boylan argued that our laws have crept ahead of society’s beliefs about the LGBT community.

The numbers, unsurprisingly, are…discouraging when it comes to perceptions of transgender individuals. About 40 percent of Americans show levels of discomfort with a transgender person supervising children—more than 10 percentage points higher than if the adult were a gay mom or dad. More than a third say they’d feel discomfort playing on a sports team that included a transgender athlete.

Rather than tell the authentic stories of transgender people, the media narrative focuses entirely on medical transition, especially surgery. In a recent segment for Meredith Vieira’s daytime talk show, Vieira interview transgender teen Jazz Jennings. During a Q&A session with the audience, one viewer asked Jennings what her plans for surgery were, despite the fact that she’s just fourteen.

This, however, is a common question—my boss asked me when I came out at work—and it speaks to the culture that has spawned around trans narratives, focusing largely on “the surgery” and very little on the rest of our lives. In a widely discussed 2014 interview, Orange Is the New Black actress Laverne Cox famously shot down questions from Katie Couric on that very subject:

The preoccupation with transition and surgery objectifies trans people. And then we don’t get to really deal with the real lived experiences. The reality of trans people’s lives is that so often we are targets of violence. We experience discrimination disproportionately to the rest of the community. Our unemployment rate is twice the national average; if you are a trans person of color, that rate is four times the national average. The homicide rate is highest among trans women. If we focus on transition, we don’t actually get to talk about those things.

A better depiction of transition could focus more on trans folks’ daily experiences, rather than hormone regimens or plans for genital surgery. It could show how transgender people have to come to terms with the terror of coming out to their family and to the world, not knowing whether they’ll be accepted or rejected for simply trying to live an authentic life.

Few media depictions have bothered to tell these stories, except for those rare few that come from transgender people themselves. Part of what makes Janet Mock’s Redefining Realness so important is that she ties her personal story together with the structural problems facing transgender people, and Laura Jane Grace’s series on AOLtv, True Trans, actually depicts what gender dysphoria and coming out as transgender feel like in a way that’s accessible to a mainstream audience.

Until these stories are embraced by the wider media, people will still be lacking education on what it means to be transgender, which makes it easier to deny us basic rights and protections. It’s hard to fight for what you don’t understand. While I expect better from Jamie Foxx and Ferrell, I’m not surprised. When the discussion on transgender issues too often focuses on genital surgery, comedians will fall into the same trap, further dehumanizing us instead of helping us to achieve the equality we so desperately need.