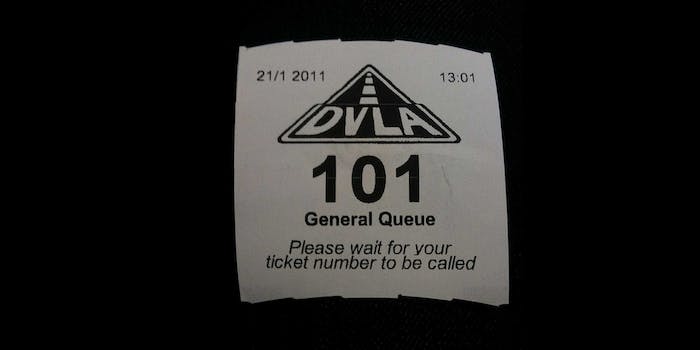 Facebook is apparently frowned upon at the DVLA, even if you use your own smartphone.

Britain’s Driver and Vehicle Licensing Agency (DVLA) fired a man from its Swansea headquarters for using Facebook on his mobile phone while at work.

The unidentified male employee was let go last year, according to a Freedom of Information request made yesterday.

An agency spokesperson told various British news outlets that the DVLA has strict rules concerning usage of social media in the workplace.

It’s worth noting that the man in question was not using company equipment, nor did he make any inappropriate comments concerning his employer, his coworkers, or a customer—behavior that could lead to termination. In 2011, the DVLA fired three individuals and issued a warning to another because of statements they made on platforms like Twitter and Facebook.

The British organization pointed out that this infraction was only the latest in “a list of conduct issues,” and wasn’t the sole reason he lost his job.

To be fair, if the DVLA is anything like its American counterparts, the agency did taxpayers a favor. Going to the DMV is widely regarded as a nightmare, and the last thing anyone needs is for the person behind the window to make an already time-consuming experience even longer by pausing to update Facebook.