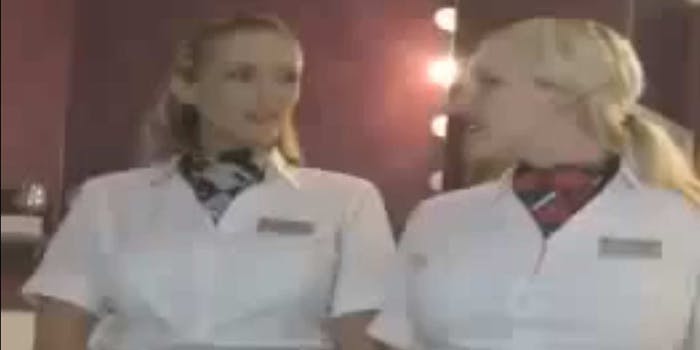 A rep claims the company is "aware of the issue."

Do you recognize these stewardesses? If so, British Airways would like a word with you.

The two stewardesses who appeared in a YouTube video last year, undressing from their uniforms and writhing in a bathtub. The clip is tame but certainly provocative and NSFW.

The eight-minute, grainy clip, called ‘Sexy Two Air Hostesses in Uniform’ has been viewed more than 250,000 times. Earlier today, a British Airways told reporters it was trying to locate the pair. The company said it had known about the clip for “some time” but had not yet confirmed the women were current employees.

The video shows one of the women undressing the other, showering, washing her hair, and massaging her in a hotel during a layover. The video first spread among BA employees and was posted on YouTube last June.

A spokeswoman told the Telegraph: “We’re aware of the video. Investigations continue to establish their identity.”