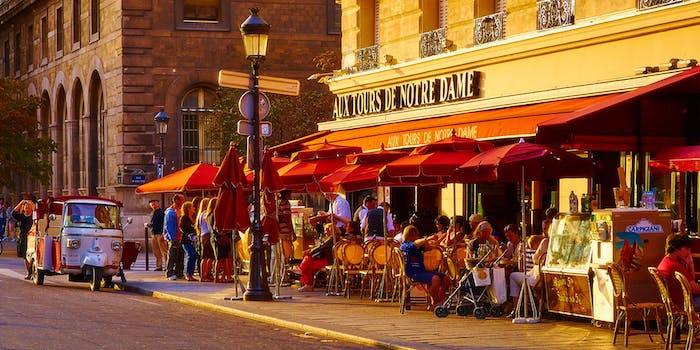 A brief guide to our long history of hating the French

Recently, a man built a giant butt to fart at France, and according to polls, a lot of Americans wish they could do the same.

Think back. What’s the most you’ve ever hated something? What did you do to express that hate? Can you remember?

Whatever the object of your hate was, it’s all but impossible that you found a way to channel that hate as creatively as British inventor Colin Furze, who has created a mechanical butt to shoot farts at France. That’s right, Furze has literally made a giant, metal rear end, built with the sole intention of being aimed, and fired, at France.

In the past, Furze has probably been most famous for inventions that imitate the X-Men. But his boyish penchant for tinkering has never resulted in anything this ambitious or all around weird before. Needless to say, the giant butt has more to do with Monty Python than it does with diplomatic relations. But his fart machine does raise an interesting question: why do people hate the French so much?

French hatred is fascinating because it isn’t limited by country or continent. Certainly, Americans have a well-known reputation for Francophobia, especially in recent history. But as Furze shows, Europe has quite a penchant for hating the French, too.

This year, Frank McNally at the Irish Times wrote a list of “38 reasons we should hate the French (or at least dislike them mildly)” which appeared in the publication’s “Heritage” section. Among his reasons, he lists “Irregular verbs,” “their bread is phallocentric,” “They didn’t send any soldiers at all in 1803, despite repeated invitations,” and “The rudeness of Parisians”, which is a common theme, in terms of French hate. “Phallocentric bread” might sound pretty comedic,  but the comment about not sending soldiers, in reference to the Irish rebellion of 1803, reveals deeper wounds about shared European history.

Speaking of shared history, 1803, as it happens, was also the start of the Napoleonic Wars, the first of which pitted England against France. Things have improved a bit since then between the Brits and the Les Francais, but as Colin Furze would surely tell you, a certain amount of animosity persists. A couple Englishmen even wrote a book called, 50 Reasons to Hate the French, lest you think that everybody is all sunny all the time over in Europe.

Not to be outdone by their neighbors to the West, The Telegraph in Britain actually put out a “30 reasons why we hate the French” list seven years before the Irish Times ran theirs (perhaps the extra time gave them the opportunity to think of eight extra reasons). Written by Alex Clarke and Jules Eden, The Telegraph’s lists included justifications for their hate, such as France’s apparently inferior abilities at Rugby (a detail which also showed up on the Irish Times’ list), their love for Jerry Lewis (although their love for Woody Allen might’ve been just as good a reason to dislike them), and Napoleon. And, of course, that they’re rude.

The Napoleon point goes back to those ties in Europe that predate America. However, the clashes these countries went through overtime haven’t left total anger. Responding to the question “Why do the French hate the British so much?” (proving that there is bitterness on all sides), the Ask a Frenchman blog acknowledged the bad blood, but also rejected it. He wrote,

The wars we had were centuries ago… the last one was 1815 if I’m not wrong… But as you’re not an American (whoops, sorry, I said I was gonna leave you alone tonight guys, sorry…) you know that two Centuries are not much when you’re talking about history, especially compared to roughly a thousand years of being almost constantly sworn enemies… But in the end, yes we have our differences, our rivalries, and our history, but no, the French don’t hate the British, although their popularity would be higher if they finally fully committed themselves to the EU and if their rugby team lost more often against France.

Besides proving emphatically that Europeans are obsessed with rugby, the above reply also gets at another thing many countries across the Atlantic have in common—their shared frustrations with Americans.

Where Europeans’ hatred of the French is routed in years of history, at least part of America’s French-bashing stems from widespread misconceptions about the country.

Just as there’s a book devoted to hating the French, vast confusion about France has inspired a text, too, with Stephen Clarke’s book, 100 Years of Annoying the French. For Americans, these misconceptions usually manifest in confusion about vacation spots, predominantly Paris. Lifestyle website Thrillist released a list of “19 Things You Have to Explain to Out-Of-Towners About Paris” merely a few months ago. And About.com has a “Top 10 Myths About Fance and the French People” piece on their site as well.

It should be noted that some of these misconceptions go both ways. Thrillist did another piece, entitled “What French People Really Think of the U.S.” this year, wherein soundbites like “Obama plays basketball. That’s pretty cool” abounded. One quote that was especially interesting read, “If a French person talks to an American, we will say France is the best place. But if we speak to another French person, we will both agree that France sucks.” What this sentiment ultimately reinforces is the idea that people are almost always more protective of their countries when talking to outsiders.

That said, Americans do seem more xenophobic than most. Ann Coulter’s recent rant about soccer (plus the rest of her career, for that matter) is prime evidence of that.

Madeline Kruhly attempted to trace these attitudes back to fellow Atlantic writer Raoul De Roussy De Sales in 2012, looking at an essay he wrote in 1939.

As de Sales saw it, American patriotism was born out of a forceful break with Europe’s ‘tyrannies.’ It was this sense of superiority—as the world’s most authentic democracy—that carried into the 20th century and made people feel like true Americans, far more than a tie ‘to a definite spot on the planet.’ At the time this article was published, America’s tendency to set itself above the rest of the world had led to a policy of isolationism. Europe was not to be trusted; it was a danger to the identity and the integrity of America’s much more moral society. (It should be noted that although de Sales applauded this view, he was, somewhat ironically, a French journalist.)

It’s hard to say whether de Sales really was a self-hating Frenchman, as Kruhly ostensibly claims, but assuming that’s true, he probably wouldn’t have renounced his homeland with more passion at any other time in history than during the beginning of the Iraq War. The scars from this period in recent history run so deep that Vice did a piece in February about restaurants that still use the term “freedom fries.”

When France refused to support the U.S. in the Iraq War, Americans’ views of the French plummeted. Max Fisher, yet another Atlantic writer, contrasted how much has changed in over a decade. Fisher observed, “In 2003, Americans’ popular attitudes toward France were worse than toward any other European country, including Russia: 60 percent unfavorable and 29 percent favorable.”

But although the political climate is markedly different now, French hatred has not come close to subsiding in the years since we first invaded Iraq. The Huffington Post’s Joan Z. Shore noticed a resurgence in 2006. He wrote,

There is a constant undercurrent of paranoia in regard to the French lifestyle Americans are raised on the work ethic, and often pride themselves on being workaholics. The French, as we know, have reduced their work week to 35 hours, take five-week paid vacations every year, and sneak off whenever they can to loll in a cafe. This, conclude most Americans, is taking the pleasure principle too far. Somehow, it seems to threaten, or at least contradict, our own Pursuit of Happiness. The French are having more fun!

And around the last Presidential election, American ugliness towards the French reared its head again, when Mitt Romney made the mistake of speaking about France positively.

Fisher concludes that where Americans the French are concerned “the armchair theories tend to fall into two categories: the “thankless French” argument that Americans resent France for being insufficiently deferential or grateful for U.S. assistance in Vietnam and both world wars, and the “American inferiority” theory that we are intimidated by France’s superior politics, culture, and health care.”

This angle takes into account both Shore’s “Lazy Frenchman” theory, as well as similar, albeit more recent historical grievances akin to those that England and Ireland have with France.

The problem is that neither of these notions have a true basis in reality. France played a huge part in the Revolutionary War, proving not only that they’ve been involved in military struggles, but that our military history is directly linked to theirs.

And if anyone is upholding stereotypes about French pomposity, it’s Americans. The way the U.S. has fetishized French cheese and wine and everything else, then appropriated those things as status symbols, is on us. If anything, our love for the French is also what caused our hate for them. To a certain extent, this is a key part of America’s relationship to all other countries. Yet so many of our cultural institutions are happy to mock France in particular to no end.

So how do we curb French hate? Do we stop letting our students study abroad? Do we bar film geeks from talking about Breathless? Or do we simply stay off the Internet, which seems to amplify all hatred?

The answer is none of the above. For better or worse, the divisive feelings about France and its people are part of what makes the country unique in the modern world. Hopefully someday, the rest of Europe will make peace with France (and with each other), and Americans will also become more open-minded about all things French (that said, Americans have a rather slow track record when it comes to being open-minded).

That world is undoubtedly far away from that time, but it is worth considering this: despite Ann Coulter’s best efforts, American interest in the World Cup reached an all time high this year. We may still believe that Europe is “not to be trusted” to a certain degree, but some trust appears to be growing. And if the Europification of America is nigh, than maybe America has a chance to extend its embrace beyond the Western world, too; it remains our most ironic trait—that a country built on immigrants could be so skeptical of everyone else.

But in the meantime, we’ll have to settle for watching Colin Furze blow giant farts at France. At least until we one up him and build a fart machine of our own.