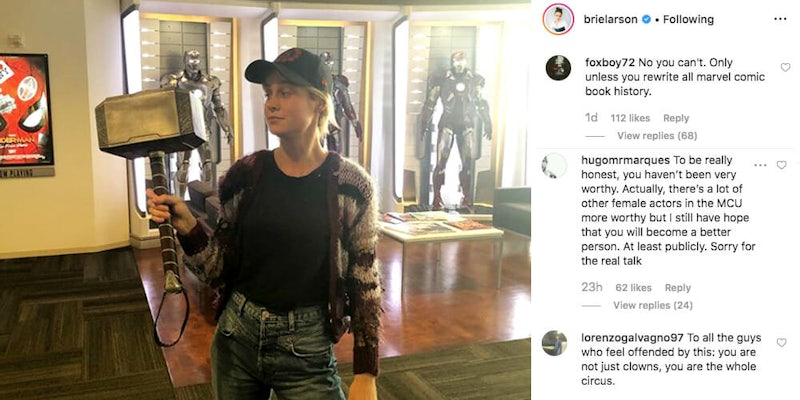 Brie Larson is no stranger to the salty tears of angry man babies. Her casting as Captain Marvel and refusal to cater to the fragile egos of straight white guys who still believe every comic story and hero should be catered predominately towards them proved that some people may never be ready to embrace female superheroes.

But that hasn’t stopped her from continuing to be a badass role model and proving that women are just as adept at being heroes as men.

Taking a break from her normal schedule (which we can only imagine consists of hanging out with Tessa Thompson and pushing cars up hills), Larson posted a photo to Instagram yesterday of her posing with Thor’s hammer, Mjölnir.

“Not to be whatever, but….told you I could lift it,” she joked.

As any Marvel fan could tell you, Mjölnir is only able to be wielded by those it deems worthy. So far, the cinematic universe has shown Thor, Captain America, and the android Vision capable of lifting the powerful weapon. And it was recently announced that Natalie Portman would return to the MCU as Jane Foster to take up the mantle of Mighty Thor —and take up Mjölnir as well.

Certain people didn’t take to the news that Jane Foster, a woman, would step into the role of Thor and pick up his hammer, and similarly, certain people were fairly outraged that Brie Larson would dare, uh, joke about being able to as well.

“Captain Marvel is cool and all but no she cannot lift the hammer, she isn’t selfless, she is cocky,” another claimed.

But as unhinged as some people on the internet got over Larson daring to post a cute photo with a funny caption, her fans were right there ready to throw some truths right back in their faces.

Add: Cap breaks a team and don't let Tony to understand the situation, leaves Bucky alone knowing he was the only reason why Bucky didn't kill himself; Thor didn't care about anything till T3 and mostly didn't give a fuck about Loki

Carol was saving the universe all these years

Anticipating how upset literally anything Brie Larson does will make Captain Marvel haters has essentially become a hobby among her fans at this point, and Thor’s hammer really had them pulling out the popcorn this time.

you don't know enough how much men are weak until brie larson posts a pic of her holding thor's hammer,,,,,

Brie Larson can make grown men cry by just posting a picture of herself holding Thor's hammer her power pic.twitter.com/8qVe8T94Hw

Unfortunately, Larson being able to pick up a prop hammer doesn’t actually translate to Captain Marvel being able to wield Thor’s enchanted weapon. But at least now the MCU knows exactly what they need to make canon to get the most oversensitive control freaks of their fanbase to cry.

In the meantime, we’ll just sit back and wait for Natalie Portman to pick it up. A fresh wave of tears is on its way, boys.