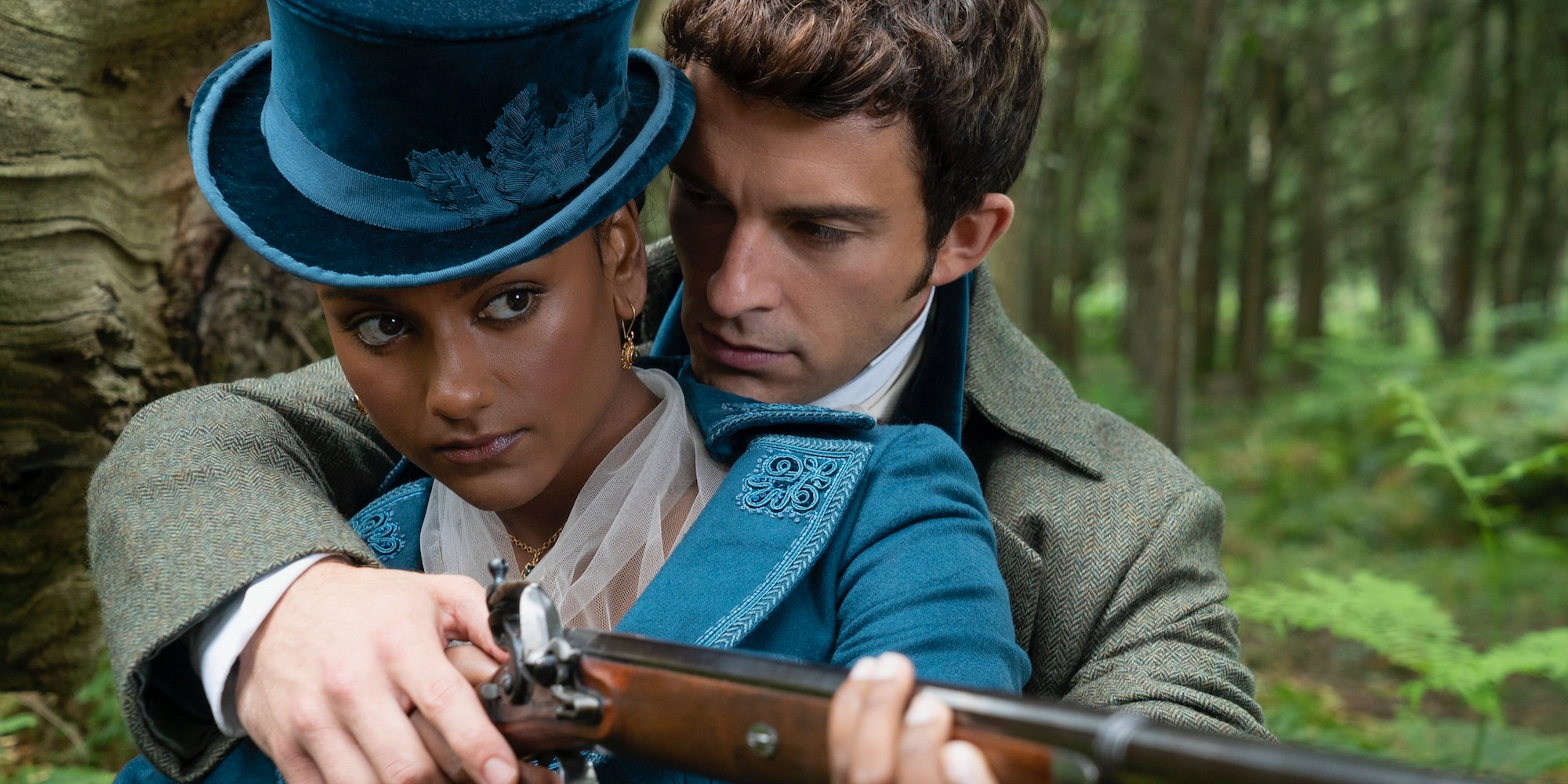 It's bolstered by the chemistry between its two main leads.

When Bridgerton first debuted in December 2020, it took the world by storm in a way that few people might have imagined possible. The instantly addictive romance series was both a critical and commercial hit, it became Netflix’s biggest original series ever—a distinction that it held until Squid Game’s arrival last fall—and it turned Regé-Jean Page into a star. Following in the footsteps of Julia Quinn’s series (and the functionality of many romance novels), season 2’s arrival zeroes on a brand-new love story with a different hero and heroine at its helm, potentially impossible expectations based on the phenomenon that stemmed from the first go-around, and without its original leading man.

RELEASE DATE: March 25, 2022
CREATOR: Chris Van Dusen
STREAMING: Netflix
Having sworn off the idea of a love match, Anthony Bridgerton zeroes in on Edwina Sharma, the ton’s newest arrival, to become his viscountess, but he faces massive pushback from her older sister Kate. Although Bridgerton has some growing pains to work through as it expands its world beyond the limited scope of Julia Quinn’s romance novels, its spark is as strong as ever.

Needless to say, Bridgerton had some pretty big breeches to fill this time. And it mostly does: Bridgerton season 2, which is largely inspired by The Viscount Who Loved Me but diverts in some major yet intriguing ways, is just as addictive and well worth the amount of ink that Lady Whistledown spills in her columns. Everything you loved about season 1—the lavish costumes and pristine production design, the orchestral pop covers, snarky remarks from Queen Charlotte (Golda Rosheuvel) and Lady Danbury (Adjoa Andoh), Lady Whistledown’s observations voiced once again by Dame Julie Andrews—is still there; the season 2 premiere is especially full of winks and nods that Bridgerton is aware of its reception, albeit to a slightly grating effect. It stumbles a bit in some of its expansion of the world beyond its primary purview, but its central romance, an enemies-to-lovers tale filled with lingering glances, hand grazes, and electrifying and palpable chemistry, is more than enough to smooth over the rough edges.

Now that Daphne (Phoebe Dynevor) got her happy ending with Simon Basset, the Duke of Hastings (Page), Bridgerton turns its attention to her eldest brother Anthony (Jonathan Bailey), who was left heartbroken at the end of season 1 and whose aim on the marriage mart is as polar opposite to Daphne’s as you can get. As Viscount, he needs to marry and have children, but he doesn’t want a love match at all; his qualifications for such a wife, he nonchalantly informs his brothers Benedict (Luke Thompson) and Gregory (Will Tilston), are that she’s “tolerable, dutiful, [have] suitable enough hips for childbearing, and at least half a brain.” (And he adds that “at least half a brain” is more of a preference than a requirement on his part.)

News that Anthony, whose rakish reputation well proceeds him, is finally ready to settle down quickly spreads across the ton thanks to his mother Violet’s (Ruth Gemmell) vocal proclamation at a ball and Lady Whistledown’s diligent reporting. He eventually settles on trying to court Edwina Sharma (Charithra Chandran), who recently arrived in London from Bombay with her family for the season. But it’s not Edwina’s mother Mary (Shelley Conn), who was once part of London society before she married someone beneath her station and left for India in a wave of scandal, who Anthony needs to impress before he can marry Edwina (though that he easily does); Edwina is taken with him as well.

It’s Edwina’s older sister Kate (Simone Ashley), who’s much more interested in finding her sister a husband than one for herself—at 26, Kate is fully aware that she’s an “old maid” by Regency standards and instead made sure Edwina was accomplished twice over—who Edwina’s potential suitors have to win over. (As Lady Whistledown snarks, those suitors “must first tame the rather prickly spinster of a beast otherwise known as her sister.”) Everyone might have the same goals in mind for Edwina, but Kate’s methods often clash with Lady Danbury’s expert knowledge of the ton, and Kate’s biggest opponent lies in the ton’s most eligible bachelor. Unfortunately for Kate, Anthony loves a challenge, and so they spat, banter, and provoke each other at every possible turn. It makes what should’ve been an easy task for Anthony all the harder. On paper, it’s a love triangle, but the execution makes that triangle feel particularly lopsided.

If you were worried about whether Bridgerton could meet the level of sexual tension it set last season, fear not. Bailey and Simone’s chemistry is palpable on-screen. A lengthy visit to Aubrey Hall, the Bridgerton ancestral home, and an intense game of Pall Mall (a lawn game that’s a precursor to croquet) that brings out the competitive spirit in Kate and the Bridgertons alike, is a high point. The hints of what could be possible for Kate and Anthony if they both made an exception to their utmost devotion to duty and what they could be “content” with—a refrain that many characters use to justify the sacrifices that led to their current situation or may lead to future predicaments—and allowed themselves an ounce of happiness is obvious to anyone who watches them interact for more than a few seconds.

Those echoes linger in looks that can make them feel like the only people in the room or in the fleeting caresses and near-grazes that owe everything to Pride & Prejudice‘s infamous hand flex; it’s the kind of tension more than one Bridgerton explicitly calls Anthony out on. In the rare moments that Kate and Anthony lay their souls bare to one another, both they (and we) start to see what lay beneath Kate’s steely resolve and the trauma that led to Anthony placing so many barriers around his heart; if anything, I wish there were more scenes of that aspect mixed with all of their banter and heated arguments. It’s a hell of a slow burn, but one they each pull off.

But Anthony, Kate, and Edwina aren’t the only members of the ton attempting to find love (or actively avoiding it) this season. Wallflower Penelope Featherington (Nicola Coughlan) is still pining over Colin Bridgerton (Luke Newton), who spent months traveling through Europe and morphed into the one classmate who studied abroad last semester and won’t ever shut up about it. Penelope doesn’t seem to mind the correspondence or hearing about Colin’s extensive travels, although her mother Portia (Polly Walker) thinks Penelope is wasting her time and their dwindling funds on paper because Portia doesn’t think that Penelope has a chance in hell with Colin.

It’s also Eloise Bridgerton’s (Claudia Jessie) first season out in society, but she’s facing her own nerves at being put on display like a peacock, the unfair pressures of living up to the success of Daphne’s season, and her own ambivalence about getting married. She wants women to be viewed for their accomplishments beyond that of a lady who is expected only to marry and bear children (she envies Kate’s contentment with spinsterhood), and she even complains to Penelope about Lady Whistledown’s frivolous musings on the marriage mart. Eloise fills her dance card with fake names so she doesn’t actually have to dance with anyone, preferring to spend all her time with her best friend, which makes Penelope’s double-life all the harder to pull off.

And so we turn to the zebra in the room: The end of season 1 revealed to the audience that Penelope was London’s most famous gossip columnist, and Bridgerton season 2 peels back the curtain to show us how the sausage is made and the pains that Penelope goes to get the next scandalous pamphlet published. It’s a very different side of Penelope than we’re used to seeing. With the guise of a lady’s maid and an Irish accent from Coughlan, it’s a much more confident Penelope who gets to assert what she wants from the printers, argues for the agreed-upon share of Lady Whistledown’s profits, and gives up some of her earnings when Eloise’s loitering make her ballroom slips more difficult. It makes Lady Whistledown’s jabs land that much harder, especially when she turns her attention to members of the ton who we like.

But as several characters revive their quest to unmask Whistledown, our glimpse behind the curtain feels more of a distraction. The same goes for the ups and downs of the Featherington household; while certain parts land, it’s hard to tell how much of the journey was worth it. Simon’s absence is felt—he’s mentioned off-hand on a handful of occasions—but for the most part, Bridgerton still works in a post-Hastings world; it’s easy to imagine that he might’ve played a similar role as Daphne as someone who mostly offers love advice to Anthony or tells him he’s being an idiot. We also meet Edmund Bridgerton (Rupert Evans), the late Bridgerton patriarch, in an episode that doubles as an excellent showcase for Gemmell, and Benedict gets the chance to hone in some of his artistic talents.

Bridgerton season 2 can feel both rushed and slowed down to a frustrating level, and some of its pacing issues only make that more apparent; it’s often messy. Even with some of the departures that it takes from The Viscount Who Loved Me, it relishes in the clichés.

But what makes a cliché succeed or feel overdone isn’t the fact that it’s a cliché or we know how it’ll go; it’s all in the execution. You might have some comfort or the dopamine hit that comes from knowing where it’s going—there’s a reason why tweets about romance tropes go viral so frequently—but when a show pulls it off, you can still make viewers second-guess themselves for a second or have them hanging onto every word like we’re witnessing it for the first time. And Bridgerton has enough tricks up its sleeve to make a story that’s as old as time feel a little brand new.