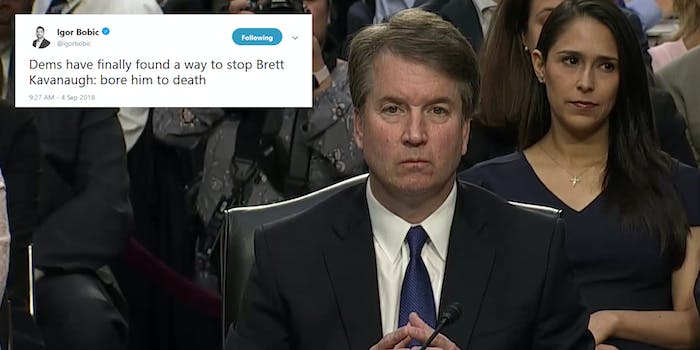 He hasn't said much during the hearing on Tuesday.

Supreme Court nominee Brett Kavanaugh hasn’t spoken very much during his first day of his confirmation hearing before the Senate Judiciary Committee.

As Democrats, and protesters, made their criticisms with the process and nominee known mere seconds after committee chair Sen. Chuck Grassley (R-Iowa) began the hearing, Kavanaugh was left with little else to do but watch the arguments unfold in front of him.

Democrats argued that they did not have time to review thousands of documents regarding the nominee that were delivered to them on Monday. The hearing was also routinely disrupted by protests from people in the audience.

Kavanaugh—the person at the center of Tuesday’s hearing—had more or less nothing to do as the hearing reached two hours of a back-and-forth between senators on the committee. That prompted speculation about what was going through his mind.

Kavanaugh should take out a deck of cards and start playing solitaire.

Dems have finally found a way to stop Brett Kavanaugh: bore him to death

How many hours of Kavanaugh’s long prep sessions did he practice sitting calmly and silently?

Brett Kavanaugh through the entirety of his hearing so far. pic.twitter.com/hL06WLcfw4

Kavanaugh, eventually, will have an opportunity to read his opening statement on Tuesday. He did speak briefly to thank the Senate for having him and giving his children the day off of school.

However, given that each senator on the committee has several opportunities to ask the Supreme Court nominee questions over the next several days, he may be enjoying this few hours of silence.