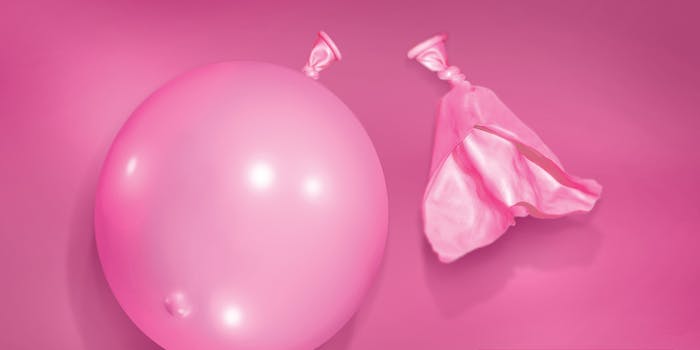 Here's who gets left out of the campaign every October.

I’m hunched over the table in the exam room, holding my too-small exam gown shut awkwardly over my chest while I lean forward to talk with the surgeon. The plastic surgery department is actually pretty nice, with real art on the walls, some choice flooring, and gentle lobby music. There are even couches in the lounge. I guess they can afford it, given the usual run of services they offer.

That includes gender confirmation surgeries, available from only a handful of surgeons in Northern California, many of whom work through my own health care provider, Kaiser. My surgeon is friendly and outgoing as she goes over the surgery, but as she woefully points out when I part my gown, “Oh my, you really were blessed with more than your fair share.”

I can’t remember what quip I made, but she laughs and notes something in her record before turning back to me.

It’s hard to know how many people get top surgery—also known as subtotal mastectomy—annually, but there are a growing number of us. And all of us are at risk of breast cancer, but it’s something that’s almost never talked about, including during Pinktober. That’s the name for the annual ribbon-bedecked extravaganza in which people learn that breasts are worth more than lives (“save the tatas!”), crass commercialism is more important than health care (selling carcinogenic products in the name of “the cure”), and empty gestures are more important than providing concrete support to breast cancer patients, as well as research and prevention (buy some yogurt today!).

Hey guys! October is #breastcancerawareness month. Grab a friend, and join me in the #movetocure… https://t.co/b6svRsxCiE

This time every year, I say that most people are already “aware” of breast cancer, which is true—it’s safe to say that the vast majority of people are, in fact, aware that breasts can develop malignant growths that need to be treated via chemotherapy, radiation, and/or surgery.

However, when it comes to awareness, not everyone is aware of the scope of breast cancer, because campaigns focus solely on cisgender women. Members of the trans community who get top surgery, for the very reason hinted at in the technical name for top surgery (subtotal mastectomy) are also at risk, but many people don’t know it.

A superficial awareness of top surgery leads many people, including some people in the trans community, to believe that it’s equivalent to a total mastectomy, in which all breast tissue is removed. Total or so-called “radical” mastectomies are typically used in cases of breast cancer where there are significant concerns about metastases to other regions of the body. They’re also sometimes used as a preventative treatment in cases where patients are at extremely high risk of developing breast cancer, as for example if they have variant BRCA1 and BRCA2 genes. (Genetic testing may be recommended for some people on the basis of family history.)

When it comes to awareness, not everyone is aware of the scope of breast cancer, because campaigns focus solely on cisgender women.

However, that’s not what top surgery is. In a subtotal mastectomy, most of the breast tissue is removed—but not all of it—because the surgeon wants to be able to sculpt and build up the chest in order to avoid a sunken appearance. That means that even though our chests may be flat, they still carry the lurking time bomb of cancer, and many people don’t know it. Just like people with a full set of breasts, people who have undergone top surgery usually need mammograms and breast exams—unless their surgeons and care teams specifically advise them otherwise—but many are not aware of this.

In an environment with trans-competent health care providers and consistent care, this may not be a significant issue: If a patient is known to be transgender, care providers can ask about breast cancer screening and make sure the patient is receiving an appropriate level of care.

When this isn’t the case, or when a patient feels uncomfortable outing themselves, this can pose a significant problem, because malignant growths in the remaining breast tissue might remain unidentified until they become advanced cancers.

Notably, the lack of interest in the trans community as a whole means that no one really knows the incidence of breast cancer in top surgery patients, although some research suggests that people on testosterone may be at a slightly increased risk. Moreover, because of scarring from the surgery, it can also be more difficult to conduct screening, with some patients requiring much more costly MRIs to check for suspicious growths, rather than conventional mammography. These are all issues that both the trans and medical communities are not widely aware of.

This represents a huge failing on the part of such feel-good campaigns, not just when it comes to breast cancer, but on a host of other issues, too. At the same time we acknowledge that “awareness” likely isn’t an issue for the bulk of the population, society at large doesn’t discuss the fact that for some people, it actually is a problem—and these populations should be provided with outreach and education.

These are all issues that both the trans and medical communities are not widely aware of.

Unfortunately, overloading on pink leads a lot of people to tune out during October, including those who may not actually be aware that they are at risk of breast cancer.

Such awareness gaps are issues in lots of cases, but with breast cancer, they carry a particular menace. Breast cancer has become so firmly associated with cis femininity that those who undergo top surgery are turned off by awareness campaigns because they assume they don’t apply to them—and because many are made uneasy by the gendered associations of pinkness smeared across the industry and are dealing with their own complicated relationships with gender.

Many trans men, for example, are fleeing as fast as they can from pinkness and imposed femininity, especially if they’ve just started transitioning and are starting to feel empowered in their new bodies. Non-binary people who opt for top surgery, tired of being forcibly passed as cis women, might similarly avoid breast cancer awareness campaigns.

An awareness campaign focused on the trans community would need to overcome not just the usual juggernaut of mainstream “awareness” campaigns that ignore vulnerable populations, but the fraught gender politics embedded in the Breast Cancer Industrial Complex.

This is the result of failing to account for and acknowledge all vulnerable populations. The vast majority of people who get breast cancer are indeed cisgender women. A smaller population of cis men also get cancer. Transgender people of all genders are vulnerable, too, including those who have had top surgery but may not necessarily be fully educated by their surgeons or trans resource centers.

Groups attempting to diversify their breast cancer outreach by breaking free of the Pinktober mold and taking a look at other vulnerable populations—like Black cis women, who are less likely to get breast cancer than their white counterparts, but more likely to die of it—need to be thinking about the trans community, too.

We can think of nothing more horrifying than having our tatas saved, and yet cancer “awareness” rarely admits our presence.