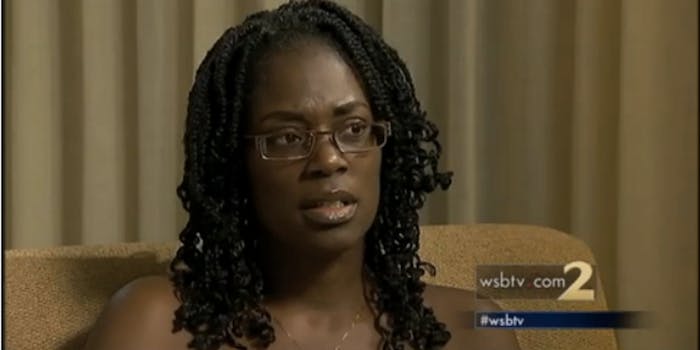 Why isn’t this Georgia school clerk the viral sensation of the year?

Social media seems to be ignoring Antoinette Tuff. What is it that makes some heros more Internet-loveable than others?

It is an easy maxim that good news never makes the news. A reformed gangbanger doesn’t make headlines when he gets his degree in prison and leads a quiet life as an HVAC repairman. However, he’ll reach the front of the Post if he unloads a clip at a rival as he passes a playground. We like storytelling with our morning coffee, and stories necessitate conflict. We like remembering that real life does not always have happy endings because we like knowing we aren’t the only one.

This past week, though, we saw a true profile in courage. Antoinette Tuff—Dickensian name and all—talked down Michael Brandon Hill from unloading over 500 rounds through an AK-47 aimed at the students, grades Pre-K through 5, of Ronald E. McNair Discovery Learning Academy in suburban Atlanta.

So yes, that good news did make the news. You already know the story, which happened on Tuesday. It took approximately 24 hours to reach the Anderson Cooper 360 level, a snail’s pace in the current environment. But good news does not Internet love make. 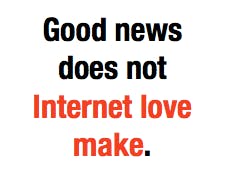 In stark contrast to the now-typical news cycle, mainstream media picked up on the story much faster than social media. Presumably hoping that the fear and sorrow felt by millions on the day of the Sandy Hook shooting in Newtown, CT would still ring fresh for most people, mainstream media led the march on this very positive news story. But the Internet was remarkably quiet. Sure, there was some feel-good coverage by Jezebel, Buzzfeed, and Slate. But without the quotable catchphrases provided by a Charles Ramsey type, social media found something better to do.

The Antoinette Tuff story shows an opening divide between “major publications” online and social media, which—through their lack of memes, animated GIFs and general virality—essentially gave a blunt and indirect shrug of the shoulders to Antoinette Tuff’s heroism: Yeah, she was heroic. Now what? The first time “Antoinette Tuff” began trending nationwide on Twitter in the US was early Friday, where it lasted only a few minutes. Her largest Facebook fan page has a mere 1,700 members; Charles Ramsey, the man who found and freed the victims of Ariel Castro and the most recent receiver of the Internet’s special brand of mob love, has 38,000. Searching for her on Reddit, a community which prides itself on telling the stories of the unobserved good, finds nothing outside of r/MorbidReality.

So what gives? Is it merely a good story being buried under the bad? Did a 35 year sentence for a war criminal/whistleblower and chemical attacks killing 100/1,000 understandably outweigh Ms. Tuff? Or is there something that differentiates these people-turned-hero-characters that makes one more Internet-friendly than the other? 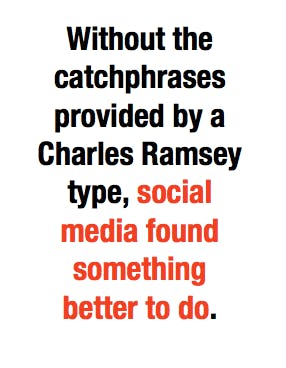 Both Ramsey and Tuff are undoubtedly heros, Ramsey when he freed the four victims of serial kidnapper and rapist Castro. He was lauded with attention, earning numerous TV interviews and free hamburgers for a year from McDonald’s. He trended on Twitter for a solid week in the US. Our fascination with Ramsey went so far as to reach the inevitable backlash stage, as we discovered Ramsey’s unfortunate past records of domestic abuse this past May. And while. Ramsey’s feat of doing the right, brave thing at the right moment is more than commendable, there is a real—and obvious—reason why he was granted Internet fame, and not Antoinette Tuff.

Antoinette Tuff is soft-spoken, an articulate mother of three with a somber, down-to-earth attitude. Charles Ramsey was rough around the edges, used street vernacular, and spoke outright about race (“when a pretty little white girl runs into a black man’s arms”). In a word, he was funny, and a little shocking. Funny sells, retweets, upvotes, and likes. Ordinary Ms. Tuff does not.

The Internet has a long history of granting celebrity status to slang-heavy poor people, be it Antoine “Bed Intruder” Dodson (who is now an orthodox Jew), Ted “Homeless Man with A Golden Voice” Williams, or Kai “Later Arrested For The Murder Of A New Jersey Lawyer” The Hitchhiker. While a lot can be said (and a lot has been said) about whether these are incidences of America indulging in stereotypes (The Ghetto Rat, The Magical Negro, The California Surfer), the contrast provided by the ignoring of the Tuff story has enlightened a great deal about social media. 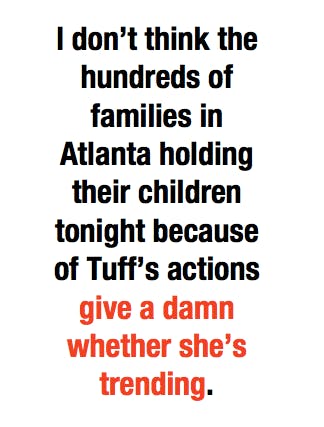 Don’t get me wrong: Antoinette Tuff is getting her due elsewhere, with even a presidential invitation to the White House. The tragedy she prevented by having a heart—and enormous bravery—is bigger than anything I could say about online culture. I don’t think the hundreds of families in Atlanta holding their children tonight because of Tuff’s actions give a damn whether she’s trending.

But her absence online is simply more evidence of what cable news reporters and the likes of Will McAvoy have known for a long time: people want to hear the bad more than the good. No, scratch that: they want to hear the funny and the shocking more than the good. When Twitter is more incensed about MIley Cyrus’ career decisions (no matter how terrible and cringe-worth they are) than it is enamored with someone who prevented another Sandy Hook, we begin to descend into self-parody.

I realize good stories are boring and it’s fun to make jokes and feel witty; I’m not exactly subscribing to Reader’s Digest and listening to The Splendid Table every day. Hell, I didn’t even have to look up that Ramsey quote. But recognize when an issue deserves your time. Applaud true heroism when you see it, and not just when it’s autotuned.

Ben Branstetter is a writer and blogger living in Central PA. He attended the Milton Hershey School and studied Secondary Education at Penn State University. His work has been published in Thought Catalog, The Useless Critic, God of Lamb, and he has appeared on HuffPo Live. He can be reached by email [email protected] and found on Twitter @BenBranstetter.