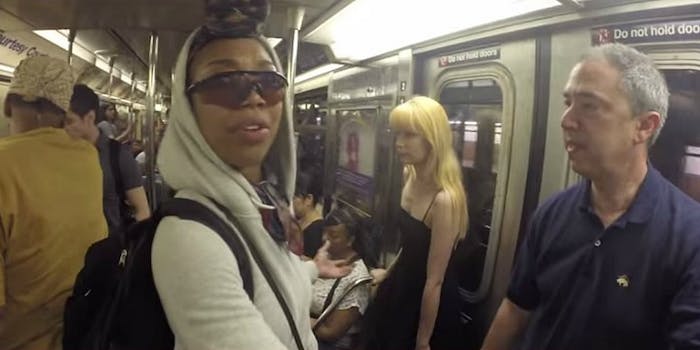 Brandy sings her heart out on the subway and nobody cares

My favorite famous-musician-who-goes-incognito-and-creates-beautiful-music-anonymously-while-nobody-pays-the-slightest-bit-of-attention experiment has to be world-class violinist Joshua Bell, who stood at a Metro stop in Washington D.C., in 2007 and played for 43 minutes with only one person truly recognizing him—it was chronicled masterfully by the Washington Post.

But Brandy Norwood—you might know her better as simply Brandy—did a nice job with her own experiment when she recently belted out “Home” on New York’s subway system. Watch the crowd go wild.

As she noted on her personal blog, Brandy, who’s starring as Roxie Hart in the Broadway show, Chicago, didn’t get much love from the crowd who was forced to listen to her.

My favorite part: Brandy starts singing and nobody is looking at her. Look at the blonde woman in the black tank top behind her standing near the subway door. She’s doing everything she can to stare straight ahead and pretend that there’s actually not a woman so close who’s making all kinds of beautiful noise. 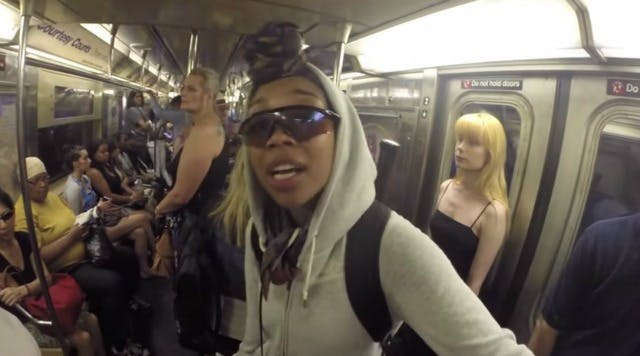 My second-favorite part: When she’s done, Brandy turns around and asks the riders’ opinion of her performance. Nobody answers. And then Brandy goes into an impression of a disappointed Valley girl. Fantastic.

My third-favorite part: Finally, somebody answers her, and he gives some good advice: You’ve got talent, he says, just engage with the people and go for it.

But forgive the subway riders who didn’t know they were being serenaded by a star. Brandy was disguised by big sunglasses and her head was covered—she also had what appears to be a tennis racket in her backpack—and though the talent is evident, there are also plenty of other talented people who play music in the subway who aren’t major recording superstars.

And frankly, usually it’s better not to make eye contact. Because more often than not, the singer isn’t simply looking for validation from strangers. The singer also usually wants money.

H/T The Root | Screengrab via ForeverBrandy/YouTube