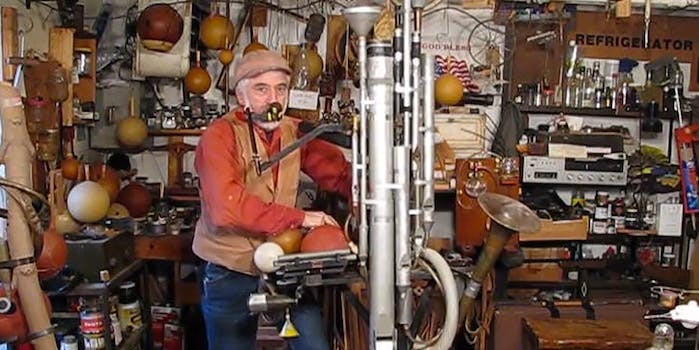 "I used my own version; adapted for 2 hands and a foot."

Leonard Solomon has been building and playing unique DIY instruments for more than 30 years. His Oomphalapompatronium made headlines back in 2011, and his Majestic Bellowphone, perhaps his most famous instrument, has been described as looking like “something out of a Dr. Seuss story.”

And now he’s putting his skills on display once again by performing a rendition of Brahms’ “Hungarian Dance #5.”

“The piece was originally scored for 4-hand bellowphone of course, but it appears that I’m the only one who plays this contraption, so I used my own version; adapted for 2 hands and a foot,” Solomon wrote in the video description.

Set up in his shop where he created many of his masterpiece instruments, he quickly gets into a groove that at this point is just second nature for him.

And as for the sounds the instrument actually makes? Just listen.