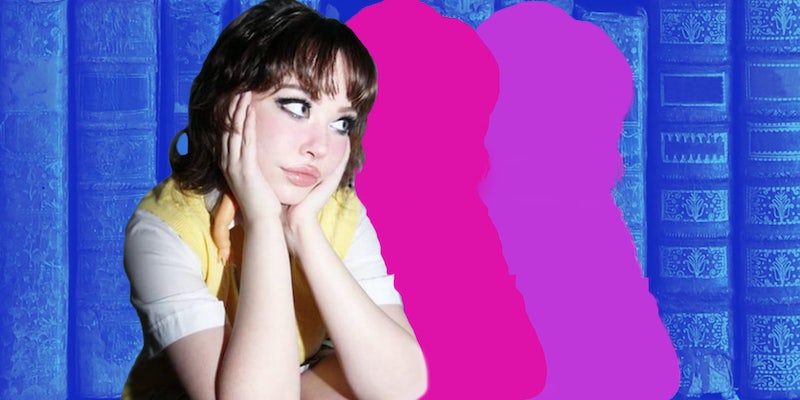 Readers toe the line between commiserating with and romanticizing mental illness.

BookTok has rapidly changed the book industry. From bookstore tables labeled “As Seen on #BookTok” to publishing houses now having new partnership programs for TikTok users and Bookstagrammers, online book reviewers have quickly become influencers within their own right.

With this new influence, creators have helped propel the “sad girl” or “unhinged girl” trend that is dominating not only BookTok, but TikTok in general. The “sad girl” and “unhinged girl” stem from one of the last year’s biggest TikTok trends—the Fleabag era. In a piece for Dazed, writer Emma Garland described the Fleabag Era as being reminiscent of a “fatalistic tone of dissociative feminism,” which “rather than anything new, has been the default tone of posting for years.” In it, women would discuss modes of self destruction, the antithesis to the trend of waking early, working out, and being the best version of oneself—known as the “that girl” era. One TikTok user described the Fleabag era to be a mode of “completely destroying your life from the inside out,” and even though you have the power to prevent this self destruction you “choose to go along with it instead.”

On BookTok, these trends consist of TikTok users recommending, reviewing, or hauling books that fall under these subgenres. The most popular picks include Sally Rooney’s Normal People, a novel that focuses on Marianne who struggles with her mental health throughout her life, and Ottessa Moshfegh’s My Year of Rest and Relaxation, a book that focuses on an unnamed female narrator who has a blatant disregard for the wellbeing of herself and those around her. Some novels under this category, like A Certain Hunger and Acts of Desperation, have even sold out at Canada’s biggest book retailer Indigo due to the hype these books are receiving online.

Often referred to synonymously as “hot girl” “unhinged girl” and “sad girl” books online, these novels have always been present in the literary world, but they are now seeing an influx of popularity due to TikTok. Videos on the social media platform showcasing these books can get creators anywhere from 50,000 to 400,000 views. I myself posted one to see what kind of engagement I could get on TikTok with only 200 followers at the time, and it has since amassed 30,000 views.

Along with this, I actually made a video criticizing this new “genre,” citing the use of the term “sad girl” as undermining the themes of many of these novels, which deal with abuse, addiction and mental illness. I also explained that the term “unhinged” should be reserved for women like Amy Dunne of Gone Girl, not women who are found in novels like My Year of Rest and Relaxation. I wanted to see if anyone on BookTok felt the same as me. I quickly learned they did. So, if I’m not the only person who feels this way, why are these videos everywhere on not only BookTok, but TikTok in general?

The short answer is simple: they do well. The virality of videos that stand within this trend is immense. Gabrielle (@etherealacademia), who started posting “unhinged girl” recommendations on TikTok as early as 2020, has become fatigued by the trend due to it being “deeply oversaturated and repetitive.” She told Passionfruit “not much thought goes into [these] videos” and she’s correct. The formula is simple: creators gather five to 10 books that they deem “unhinged” and then take a short three second clip of each, editing them together with a Lana Del Rey track and then posting.

It’s not just virality, there is something deeper as to why Gen Z is so obsessed with these trends. Gen Z has often been seen as a generation that will “change the world,” making our current climate, one where so many awful world events happen all at once, stifle many individuals’ hope for the future. Stacey (@literaryfling) told Passionfruit, “Gen Z brings a certain cynicism to everything…There’s been a shift in how we respond to bad things or bad feelings.…We see our emotions as bearing more weight and having more meaning, or at the very least, worthy of being examined more closely. ”

The Sad Girl Novel and the Fleabag Era trends are both “​​synonymous [in their nihilism]” pop culture writer Kadijah told Passionfruit. Both trends allow young women to view not only themselves but the women in the media they’re consuming as beings that create upheaval with almost no consequences. Disaster can be encapsulated in a 200-page novel or a 15 second TikTok video, embracing womanhood in all its flaws.

Zoe (@zoes_reads) told Passionfruit she is “drawn to bleak books because things feel pretty freaking bleak. It’s hard to not feel alone in those feelings, or embarrassed to have them, so turning to books and literature really validates my emotions, makes them real and gives them weight.” Despite having communication at our fingertips, it’s easy to feel alone, especially when doomscrolling on Twitter, viewing catastrophe after catastrophe. So in a way, these novels exploring things like grief, unbecoming, and mental illness and sharing them with an online community can make people feel less alone.

Despite this positive community, nothing is perfect. Gabrielle said the issue with TikToks about these books is that they don’t explain why the stories or characters are “unhinged.” “If we are going to call books unhinged, I want to see a description that justifies the label,” Gabrielle said.

Zoe also criticized the trend in a recent video for this loose usage of “unhinged.” While she enjoys the books in this genre, she has an issue with the inaccurate ways creators describe female characters suffering from grief or mental illnesses. In Ottessa Moshfegh’s My Year of Rest and Relaxation, the unnamed narrator does not act the way she does for the sake of being unhinged, she is a deeply troubled woman who instead of committing suicide, takes sleeping pills multiple times a day in an attempt to quiet her mind and the world around her. She’s not a role model for women to grasp on to, but she certainly isn’t unhinged in a bloodthirsty way like some protagonists in the recent “good for her” trend in cinema.

The Fleabag era and the “sad” or “unhinged” book trend go hand in hand, with people misconstruing these pieces of media in a way that can be concerning. Fleabag in all its humor and witness is about a woman grieving the loss of her best friend. Akin to that, books like My Dark Vanessa and Luster are about women grieving a part of their lives that they’ve lost. It’s problematic at this point to muddle these pieces of media down to just being unhinged, when they are more so analyses of the modern human psyche.

In the last couple of years, female characters who lack morality have become more celebrated than in the past, with the aforementioned “good for her” trend in cinema mirroring TikTok’s obsession with unhinged female characters. Ceren (@batumanslittleidiots) told Passionfruit, “Now it seems like the unlikeable parts of a woman are being excused and near-celebrated, especially with a disregard for how these characters treat other people in the story.” Fiction is slowly bleeding into reality and narrators such as the narcissistic and at times racist protagonist of My Year of Rest and Relaxation are becoming strange idols for a young generation.

Despite its problems, these trends seem to have channeled something within a bigger conversation about womanhood, mental illness, and romanticization, and it can’t be said that this trend isn’t offering anything to the table. While it can be harmful for women writers’ work to be viewed in such a constrained way, these books are currently flying off the shelves, and proving that BookTok has a bigger hand in the publishing industry than people give it credit for.

In a world where news is available at Gen Z’s fingertips, it’s easy to feel discouraged and overwhelmed, so much so that to say “fuck it,” seems to be the common feeling right now. In her piece “standing on the shoulder of complex female characters,” writer Rayne Fisher-Quann gets to the heart of the “sad” and “unhinged” girl trends, writing that the modern woman is “[rationalizing] our own suffering through the romanticization of those who have suffered before us and, in turn, we provide a blueprint for the hot-girl suffering of those after.” If that doesn’t perfectly sum up these trends and Gen Z’s apathy to their own anguish, what else does?

Kaiya Shunyata is a Black Canadian freelance journalist and academic. Their work focuses on film, music and how queerness intersects with the two mediums. Their work has appeared on Gal-Dem, RogerEbert.com and Letterboxd and more.