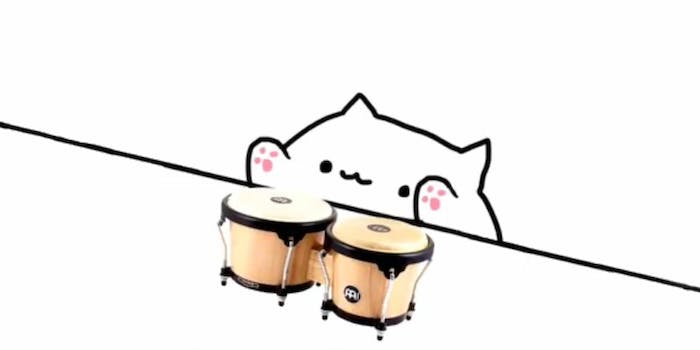 All hail Bongo Cat, the latest meme from the depths of Twitter. It’s all in the name, really. Bongo Cat started life as a gif of a cat (made by Twitter user @StrayRogue) slapping his little paws down on a table, as if to play the bongos, which is exactly what Twitter user @DitzyFlam did.

The internet wasted absolutely no time in applying Bongo Cat to more and more ridiculous parodies. There’s an assortment of classic rock songs to enjoy, complete with visual effects.

bongo my cat all day pic.twitter.com/MWIhKjVUnW

There’s also a parody of “We Are Number One” from the kids show LazyTown.

Of course, a meme wouldn’t be complete without plenty of video game music parodies, and Bongo Cat has plenty to choose from. Here’s some of the best.

There are some solid tracks from the Legend of Zelda games.

#BongoCat is lost in the woods. (I definitely didn't make this because I thought they'd announce Skull Kid in the Direct) pic.twitter.com/1lpnJWalSn

Another #BongoCat (tribute to one of the best Zelda's songs) pic.twitter.com/gmOnRgoyVr

As well as the Nintendo Wii theme.

Took a crack at #BongoCat and took me a while since I haven't edited in a while pic.twitter.com/Qemp38pExT

And then, of course, there’s the really weird, meme-within-a-meme material. First up on the block is this parody of Stanley Kubrick’s 2001: A Space Odyssey.

Here’s Bongo Cat struggling to reach his own bongos.

And here’s Bongo Cat getting whipped.

Bongo Cat but i gave him an inappropriate object #BongoCat pic.twitter.com/hJ4pGnKkfK

Correction: Stanley Kubrick was the director of 2001: A Space Odyssey.