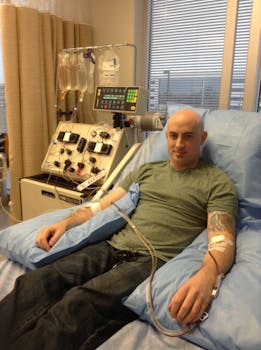 The latest redditor to donate bone marrow answered questions about the PBSC donation procedure as he was undergoing it.

Redditor PBSCdonor has become the site’s latest bone marrow donor—and perhaps the first to hold an AMA (Ask Me Anything) session while donating.

On Dec. 19, PBSCdonor submitted a post to r/IAMA that read “IAmA person who is literally donating bone marrow as I type this AMA!” He noted that he had signed up to donate as part of Reddit’s Be the Match program in December 2011, and was recently called upon to help a 26-year-old female suffering from Acute Myelogenous Leukemia.

“I am currently hooked up to an Apheresis machine that will filter these cells out of my body to be transferred to the recipient. I’m gonna be hooked up for 6 hours so AMA!,” he wrote. “Bear with me on the typing. I’m doing this one handed.”

Within hours of his post, which came complete with a photo album documenting the process, the comments and upvotes poured in. Over 1,000 redditors chimed in and the post received over 4,000 upvotes.

Forgive my ignorance, but how does the procedure actually work? Is bone marrow actually taken from inside the bones or am I just picturing the wrong thing? (resting_parrot)

“There are two ways. One is a surgery (which is what you are thinking of). The other way is shots to increase your white blood cells and a sort of dialysis which removes the cells from my body for transplant. What is awesome to think about is that my immune system will become her immune system. And she will change to my blood type as well.”

I have heard it is extremely painful and I have also heard it isn’t any more painful than donating blood. What is your opinion? (bnor9)

“No more painful than giving blood. I am hooked up to two IVs currently. The only side effect is a full body tingle that I have.”

What are the real dangers of it as told to you by the doctors?…What made you do this? (abionicwoman)

“My uncle died of leukemia several years ago. I didnt even know there was a registry until I saw it on reddit last year. I signed up immediately. The dangers are low with the process I am using (PBSC)”

Does this operation benefit you at all? Or are you just being good samaritan? (CreditingPond)

The AMA’s most-upvoted comment, however, came from someone with whom PBSCdonor is very familiar.

PBSCdonor’s procedure is hardly the only example of redditors assisting with bone marrow donation.

PBSCdonor later edited his post to let his fellow redditors know that he had completed the procedure and that his “donation is off to help someone.”