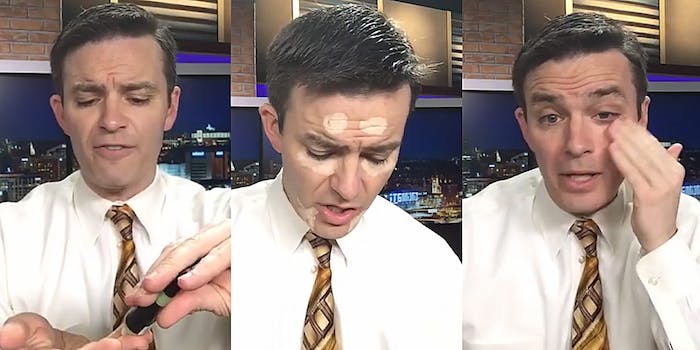 'I broke my bronzer!'

Broadcast news is a high-pressure business. When you go live, there’s no editor that can save you, and there’s no margin for error.

Maybe that’s why Cincinnati anchorman Bob Herzog totally panics trying to put on his makeup with only a few minutes to spare before he goes live.

Apparently, Herzog has been using Facebook Live to give viewers a behind-the-scenes look at what goes on at Good Morning Cincinnati, and Friday morning he arrived at work more frazzled than usual.

The newscaster explains that he forgot to move his car into his garage overnight and ended up having to scrape his widows off with a Chick-fil-A rewards card. He also failed to gas up the night before, meaning he had to make an extra stop on his way to work.

Herzog talks a mile a minute while applying primer, foundation, and bronzer. His nonstop, stream-of-consciousness babble leads to some amazing quotes, including:

At one point, he even drops his bronzer, creating a mess all over the station floor. Yet, miraculously, he manages to be cool as a cucumber when he goes live on the air. Now that, ladies and gentleman, is a professional.