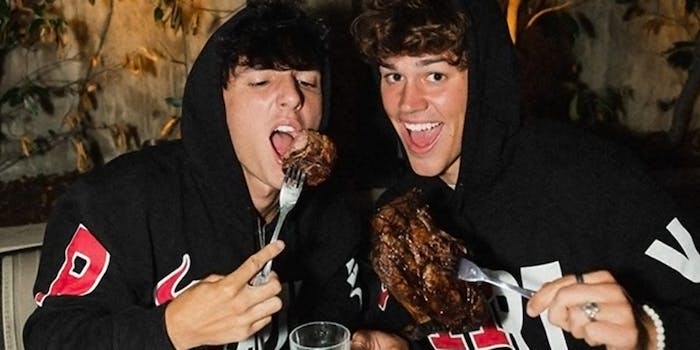 The West Hollywood steakhouse has been slammed for allowing influencers to dine indoors amid the pandemic.

The BOA Steakhouse is one of the most renowned restaurants in West Hollywood, and eating there has become a rite of passage for social media influencers. Unfortunately, aside from its ribeyes, the steakhouse has recently developed a less savory reputation for allowing famous TikTokers and YouTubers to dine indoors amid the coronavirus pandemic.

Over the past month, several prominent content creators have graced the BOA Steakhouse, including YouTuber Jake Paul and TikToker Charli D’Amelio. On July 20, paparazzi-style YouTube channel The Hollywood Fix caught up with Paul as he was leaving the restaurant. Five days earlier, YouTuber Tanner Fox announced in a video that he had tested positive for COVID-19 and had been in contact with Paul.

On July 22, the Hollywood Fix interviewed a crew of TikTokers—including Nikita Dragun, Larray, and Ondreaz and Tony Lopez—as they made their way to BOA before attending Larray’s massive, widely criticized birthday party at the Hype House.

Twitter users have criticized both BOA Steakhouse and its high-profile guests for perpetuating such reckless behavior during a pandemic.

“What’s with influencers obsession of going to BOA steakhouse during cover like can’t y’all just buy a steak and cook it in ur million dollar kitchens,” Twitter user @TeaSpillYT asked.

“Is boa steakhouse actually good or just expensive?” @luvu2golka asked. “Genuinely want to know why influencers are risking spreading covid and the respect of peers and fans to go there.”

Nevertheless, the steakhouse continues to hold sway over a particular breed of young celebrity.

“Ur not an influencer until you’ve dined at @BOASteakhouse,” New York Times reporter Taylor Lorenz tweeted, adding an inaugural meal at BOA (and post-meal Hollywood Fix interview) to her list of “influencer life milestones 2020 edition,” which included 10 million TikTok followers and moving into a content creator mansion.

In a July 22 thread, Twitter user @defnoodles said they spoke to BOA staff over the phone about the influx of influencers who recently dined on-site. The BOA staff said they were “studying the situation” and did not know whether Tanner Fox had been to the restaurant since testing positive for COVID-19.

At the time, BOA had been checking customers’ temperature at the door and requiring staff and customers to wear masks. They were not requiring COVID-19 tests to enter, but they were reportedly considering changing their vetting policy.

BOA Steakhouse did not immediately respond to the Daily Dot’s request for comment on the matter. But as long as the restaurant is open for business, it seems like it will remain a go-to destination for influencers who flout COVID-19 safety protocol.