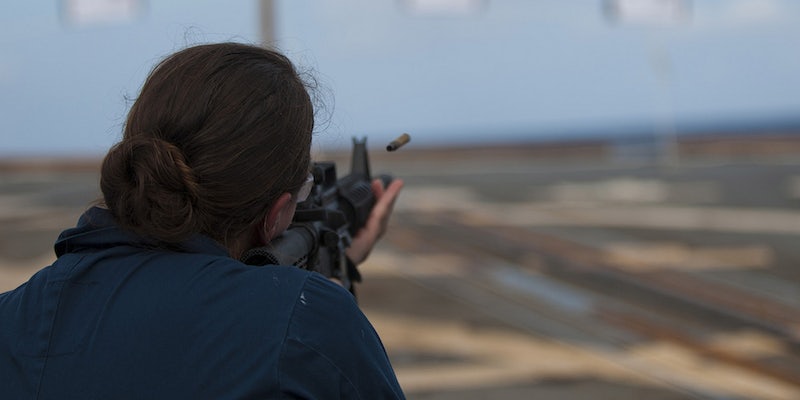 This photo from a shooting range is going viral for the worst possible reason.

Imagine entering your local shooting range, looking at the rows of people locked and loaded with handguns, aimed and ready for a few rounds of target practice. But instead of seeing a dummy or a bullseye as a target, you see a image of someone who looks like you, laden with bullet holes.

It’s a scenario that characterizes the experience of one Jacksonville, Florida man, who saw an target practice sheet with a young black man pointing a gun. In a Facebook post that has since been shared more than 60,000 times, Javell Woods said, “So I go to the range yesterday and this is the pic they had for target practice. I ask if he had any teenage white males I could practice shooting at and he told me I was a racist.” He elaborated further in the comments, “It’s just sad that its even acceptable to buy something like this on the shelf.”

Understandably, Woods’s testimony has drawn widespread ire. As conversations continue about black people being shot and killed by police officers, the alleged incident raises an important question: Why do law enforcement officials and gun enthusiasts target practice with images of young black people? 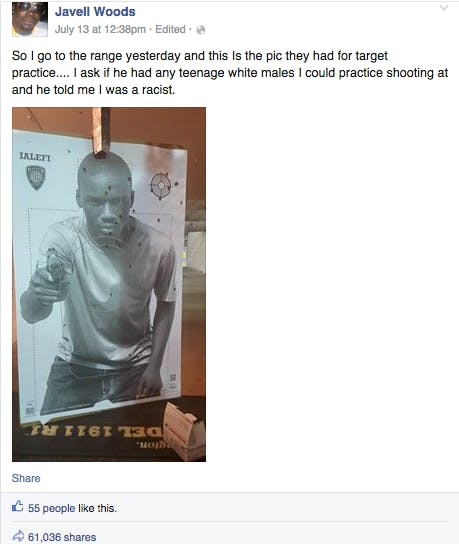 This is not a video game at the arcade. This is an image of an actual person used as target practice at a shooting range, a place where law enforcement officers go for training purposes or to brush up on their firearm skills. Indeed, it recalls incidents from earlier this year, such as when an exhibitor at a Sioux Falls, South Dakota gun show sold target practice sheets featuring an afro-clad black man as the “official running n*gger target.” And in January, a national guard sergeant complained after police officers with the North Miami Beach Police Department used black suspects’ mugshots for target practice.

Even more alarming? One of the images was of the sergeant’s brother—an image filled with bullet holes. 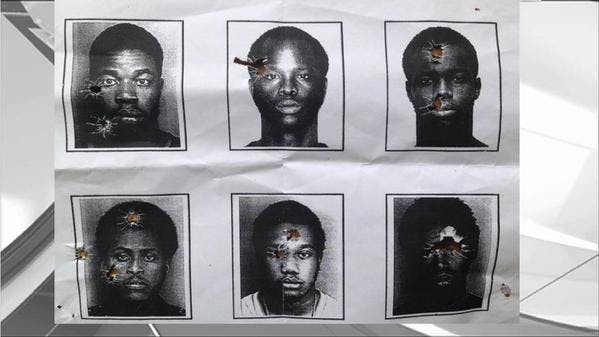 As for Woods’s ordeal, the shop where it took place, Shooters of Columbus, has since been inundated with calls, many of them from people who saw the image posted on social media, wondering how a shooting range would condone shooting black men for target practice.

The Daily Dot spoke with Nichole, manager of the Columbus, Georgia-based range, who withheld her full name for privacy reasons. Nichole said that the image in question was ordered in bulk from companies that distribute shooter training targets, primarily for law enforcement. The adult black male appearing on the target sheet, she noted, was a paid model who is well aware that his image is being used for target practice.

“These are not random photos,” Nichole said, noting that the business doesn’t control who appears on the targets. “The shop has nothing to do with printing. We buy these from other companies that make law enforcement shooting practice targets.”

The shooting range manager also added that they have roughly 56 targets for practice shooters to choose from. Many of the targets come in standard forms, such as the bullseye or the silhouette target, and other novelty forms such as tic-tac-toe and battleship targets intended for recreational use. Of the more than four dozen targets available for customers to select, Nichole said, only eight are images of people used for scenario target practice—such as being approached by another person with a gun—and, of those eight, six are white targets. The couple of remaining human targets are images of people of color.

“All the pictures are of armed people. In no way, shape, or form do we condone shooting unarmed people,” Nichole told the Daily Dot, highlighting that scenario targets are intended to aid in shooter training by getting people into the mindframe of a life-threatening situation. “People carry weapons in self-defense because they don’t want to be victims of crimes. These posters are to make you feel, in the scenario, that you’re a victim of a crime.”

Even so, the shooting range customer who posted the photo on Facebook claimed he was called “racist” by a male attendant, after asking if they had images of white men also available for target practice. Nichole insisted that the shop doesn’t condone any type of racism and that the customer could’ve brought the situation to management to be remedied accordingly.

But if the shopkeepers aren’t responsible for who appears on the target practice sheets, who is? As it relates to this one particular photo—where a young black person’s likeness was used for shooting practice—the upper left corner of the image shows the logo of the organization in charge of distribution: the International Association of Law Enforcement Firearms Instructors.

The IALEFI’s website says its mission is to update and modernize the instruction and training techniques being used to train the majority of law enforcement officers. It’s an updating and modernization process that, so far, may very well be subject to conversations about the nature of racialized policing and law enforcement practices, including shooter training. The organization’s target shooting sheets are sold by a variety of online stores—including Targets.net, the American Target Company (which prints and distributes official targets from the National Rifle Association), and Law Enforcement Targets, a store the Shooters of Columbus said they frequent.

IALEFI is preparing to publicly address the nature of their scenario practice targets, including the image currently going viral, but had yet to provide a statement at press time. 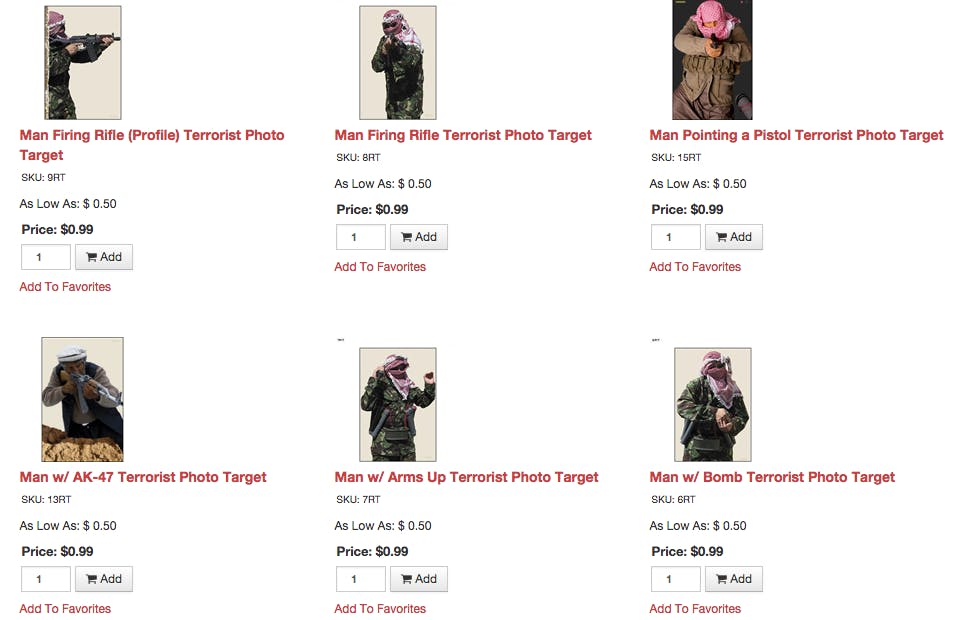 At the online stores themselves, there’s a plethora of scenario target sheets with human images. Indeed, many of the images include white men and women. In the shop at the National Target Company, for example, the color photo targets include people of all colors wielding weapons, mainly men. On Law Enforcement Targets, under the “terrorism” section, there are images of Middle Eastern men and women, dressed in various head coverings and veils. Woods added in the comments of his Facebook post that the range also had an target with a Middle Eastern male, wearing a head covering and donning a long beard.

It’s one thing to have a variety of images available, but the frequency at which each target is used paints a different picture. Of many on social media who commented on the circulating image from the Shooters of Columbus range, one woman who called the business claims she was told the image of the young black man was the most popular image chosen by customers. Management did not confirm with the Daily Dot whether or not this is indeed true. 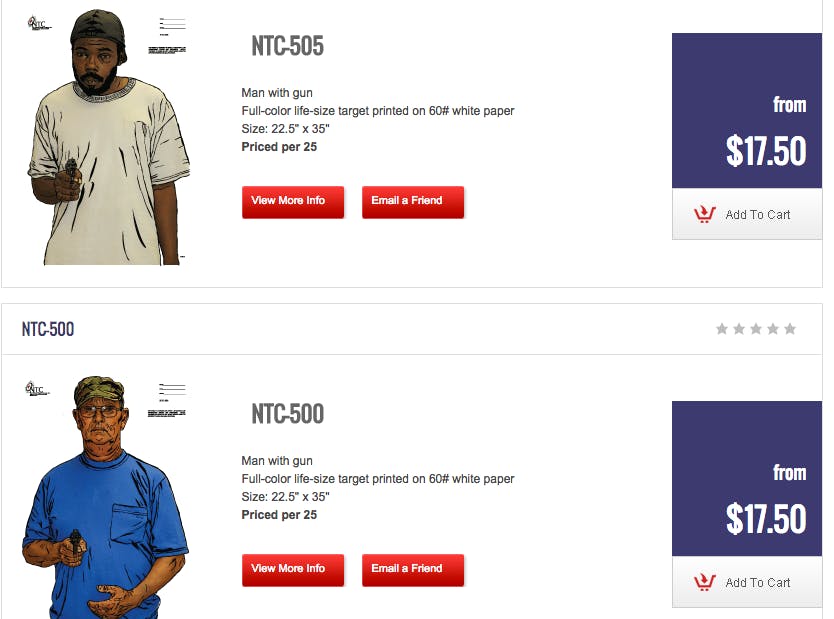 However, the very real possibility that an image of an armed black man is a popular option for target practice has serious implications for the current cultural climate, where unarmed black people continue getting killed by police officers and vigilantes at an astounding rate. As traditional shooting range practice relates to law enforcement, scenario target practice remains a common option to help officials prepare for what may happen in the real world.

Do officers really need images of people, particularly those of the black and brown variety, modeling as human targets to help them improve their shooting accuracy? Indeed, there are virtual police training simulators and real-life active shooter trainings to help officers learn how to skillfully use lethal force, with situational awareness and discernment.

With the use of models on target practice sheets, such as the the one filled with bullet holes at the Shooters of Columbus range, there’s understandable concern about the role of implicit bias. There’s nothing stopping any individual from walking in a shooting range to use black people as target practice. But it’s indeed a space where biases can be reinforced when an individual self-selects a scenario where they believe they’ll feel most “threatened,” and thus able to make the quick determination to accurately shoot on demand.

Officers don’t have easy jobs, and a learning how to use a lethal weapon—purportedly for self-defense—isn’t a routine, thoughtless undertaking for the average person. Most of the reaction to the alleged incident at Shooters of Columbus isn’t anti-range or anti-gun practice; it’s an indictment of a situation where racialized law enforcement behaviors may take root.

Do officers really need images of people, particularly those of the black and brown variety, modeling as human targets to help them improve shooting accuracy?

According to a 2014 study published by the American Psychological Association, black boys as young as 10 may not be viewed with the same light of innocence as their white peers. However, young black men and boys are more likely to be mistaken as older, perceived as guilty, and face police violence if accused of a crime. It’s a bias that could, in part, provide context into the situations that lead to deaths of black youngsters such as 12-year-old Tamir Rice and 17-year-old Trayvon Martin, who were unarmed and gunned down because they were perceived as criminals.

And in a 2009 study led by University of California, Los Angeles researcher Jennessa Shapiro, seeing an angry face on a black man makes white people more likely to view other African-American males as threatening. “White participants failed to reduce their judgments of threat when a (neutral) black male face followed an angry black male face,” the Pacific Standard’s Tom Jacobs explained. “Indeed, after viewing an initial same-race angry face, black males were seen as more threatening than white males, even though the faces were pre-tested to be equivalently neutral.”

With leading research showing how skin color, facial expressions, styles of dress (such as hoodies) and other visual elements remain racialized—especially as they pertain to black people—it’s not the best idea to use models posing as armed criminals for target practice sheets. Not only could it bias a practice shooter’s perception of criminality, it could indeed give way to an unfortunate real-life scenario where people get needlessly shot and killed by officers and vigilantes.