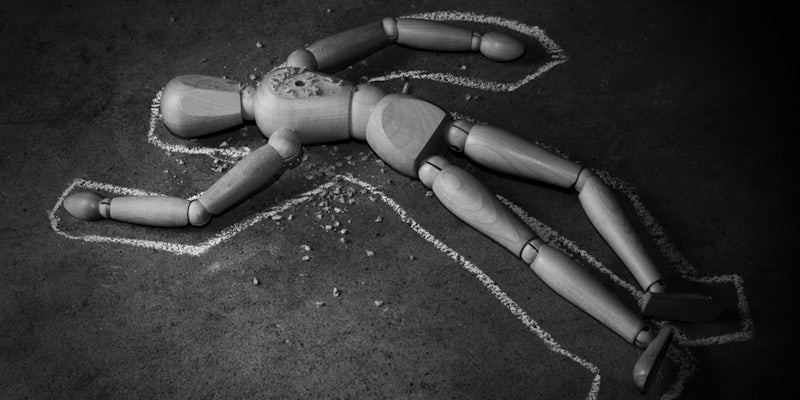 It feels as though every week a story breaks in which an unarmed black man is killed by police. The killing always takes place after a confrontation over some petty offense, be it a broken taillight, jaywalking, or the selling of loose cigarettes. Subsequently, videos emerge that clearly display the extrajudicial killings to hundreds of thousands, if not millions, of spectators worldwide.

Just as with Jim Crow-era lynchings, the public spectacle of black death reaffirms the terror brought to black communities by police, and America is clicking to see more.

The circulation of these videos on Twitter, Facebook, and YouTube is rather disturbing. To witness the final moments of someone’s life is not supposed to be a regular experience, yet it feels like every week, we’re presented with a new video of a different unarmed black man—or child—killed by police.

With the reach of social media, each of these videos is viewed ad nauseum, and you have to ask what purpose this serves. Who needs to see these videos at this point? After all, wasn’t Ferguson enough to shine the light on the larger issue of state-sanctioned violence and systemic racism in the United States?

The public spectacle of black death reaffirms the terror brought to black communities by police, and America is clicking to see more.

On one hand, I believe white Americans need to bear witness to the constant unprovoked violence by police in black communities nationwide. On the other, these videos do little to lay to rest the doubts of skeptics who see each police killing as isolated incidents, preventable if the victim had not run, shoplifted, sold cigarettes, talked back, crossed the street, worn a hoodie, carried a BB gun, or knocked on a door.

In some rare cases, videos showing blatant acts of police violence could possibly lead to justice for the victims, but most likely, as in the case of Eric Garner, choked to death by police in Staten Island, it does not.

Regardless of whether videos result in justice for the victims, simply watching the videos is participation in the spectacle of black death. Brittney Cooper of Salon writes, “[W]hite people need to be able to pull up a chair and watch the lynchings take place over and over again, to DVR them, fast forward and rewind through them, to smother black pain and outrage and fear in an avalanche of cold, ‘rational’ analysis.”

Sheena Howard of the Trentonian elaborates, “Today, the thought of watching a person hanging from a tree at a lynching party sounds grotesque,” but the willful participation in the viewing of Walter Scott’s video—but, really, it could be any of these recent videos—is akin to members of the white population who attended lynching parties less than a century ago.

At the turn of the 20th century, as Jim Crow laws were well in effect, public lynching was a favorite spectator sport for Southern whites; it reinforced the idea that black bodies were consumable, whether by burning or dismemberment. Spectators often vied for souvenirs, such as a piece of the victim’s clothing. As Dora Apel explains in Imagery of Lynching, rope was a particularly “prized souvenir…cut into pieces and taken home by dozens of spectators.”

Lynching was a tool used to enforce segregationist ideologies and devalue the lives of African Americans. Indeed, for a person to be publicly tortured and killed at the satisfaction of a viewing audience, they lost the humanity afforded to white Americans. As Grace Elizabeth Hale states in Making Whiteness, “blacks were humans who could be treated as nonhuman, and no amount of care on their part to follow the ‘rules’ could in the end ensure their safety.”

Lynching reinforced the idea that black bodies were consumable, whether by burning or dismemberment.

Additionally, according to Hale, the majority of Americans, “white and black, northern and southern,” learned about spectacle lynching through newspaper and radio accounts, and experienced the terror or amusement at a distance.

However, “a person did not have to experience the violence directly to feel its effects.” The lynching of black Americans reinforced the dominance of white supremacy during segregation, putting into practice the belief that black lives do not matter, they are not human lives.

Today, #BlackLivesMatter is the primary message of activism against the widespread killing of black people by police. The fact that law enforcement needs the reminder that these lives do matter indicates that black lives have been historically undermined and devalued since slavery.

Speaking with the New York Times earlier this year, philosopher Judith Butler explains that, under slavery, black lives were worth a fraction of a human life, and lives that “mattered more, were more human, more worthy, more deserving of life and freedom, where freedom meant minimally the freedom to move and thrive without being subjected to coercive force.” That coercive force never ended for black Americans.

As I was writing this, I learned that Freddie Gray was killed by Baltimore Police, evidently beat while in custody a week ago, put in a coma with his vertebra 80 percent severed at the neck. I felt anger and sadness upon reading the news, but I didn’t feel shock or surprise. It’s so commonplace that a police officer shoots an unarmed black man that these stories seem evergreen.

Undoubtedly, in a week’s time, there will be another name to add to the list, to swap out in the news. There will be a video to watch, repeat, and share to your network of friends as you implore them to see the the appalling violence take place through the screen.

These videos may result in a charge for the killer, in some cases, but overall they make a spectacle out of tragedy, turning it into consumable content for viewers to watch, click, share, and move on to something lighter.

Feliks Garcia is a Texas-based writer. He earned his MA in Media Studies from the University of Texas at Austin and previously edited CAP Magazine.