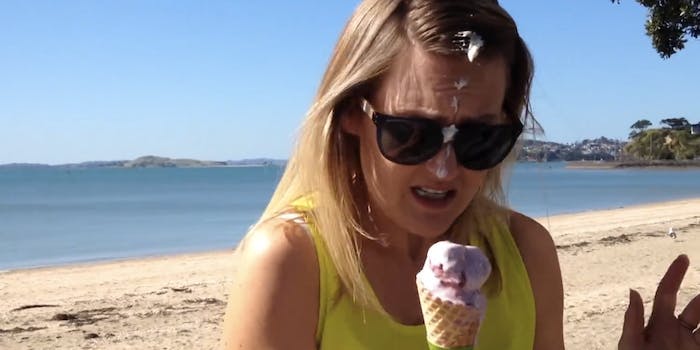 This video is Labor Day perfection.

Whoever says bird poop is good luck has never had bird poop in her ice cream.

What’s worse than licking up bird poop when you’re expecting rocky road? When the person filming the video doesn’t give you a heads-up.

In this disastrous clip, uploaded by Julie Bresnan, the guy filming laughs in this poor woman’s face when she picks up a little bird turd that fell in her cone. Then he loses it when a barrel’s worth of white goop comes flying down on her head.

It’s painful to watch. It’s amazingly funny. The timing, the expression on her face when she’s confused about what she just licked, the aftermath, the schadenfreude as we sit at our desks while others romp around outside on Labor Day weekend. Perfection.

As Julie points out in her video description, “When sending boastful home videos back to the motherland in Hibernia bragging about the great winter weather .. ALWAYS step AWAY from tress where birds may be ready to crap on you ;-/ #karma”