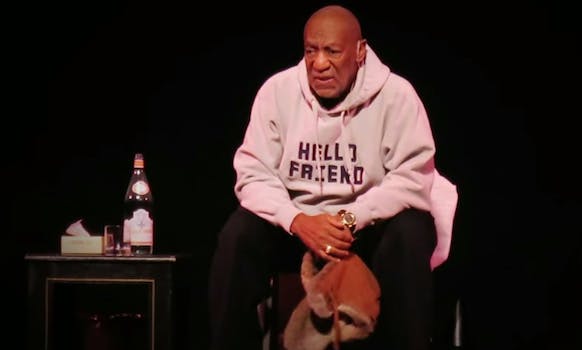 It feels like 'The Twilight Zone,' but this is real life.

“Embattled” is one of those words that I don’t believe I’ve ever spoken in conversation but that gets lots of play in writing. Lately, it tends to precede “Bill Cosby,” the artist formerly known as America’s Dad and presently known as the accused in dozens of allegations of rape and sexual assault (so far).

On Monday, the embattled Cosby issued a video statement to his fans, and it’s creepy as hell. A few reasons why:

Cosby appears to be on a soundstage or in a studio of some sort, seated in an easy chair and holding a phone on a nicely polished table. Behind him is a curtain that doesn’t quite obscure what looks like the rough cement wall of an industrial, decidedly non-homey location. A few seconds in, the camera slowly zooms in on his face, but it’s too late. Eagle eyes would have already spotted the floor vent and the ladder on the left side of the frame where the curtain was either not closed enough or not long enough to complete the sad illusion of a safe space.

Did no one have access to anything more closely approximating a living room? Did a hotel room never occur to them? Is no one on Bill Cosby’s team familiar with YouTube and the non-stop barrage of videos actually shot in people’s homes and on webcams? Say what you will about those videos, which are made for any number of reasons, but at least they clearly convey the “casual,” “at home” feeling I think the people who made this with Cosby were going for.

Cosby appears to be wearing an old-school silk pajama set. I wasn’t there to feel the material, thank goodness, but it has that look of “Bedtime on a TV Set” that sent chills down my spine. Here’s a quick a brief message to Mr. Cosby: Whether you want to specifically mention it or not, you have been accused of rape and sexual assault and your pajama choices have been publicly mentioned in accusers’ allegations. How dare you choose to wear anything that reminds anyone of the bedroom, bedroom activities, or you in bed for your video message?

Technically, most things done intentionally for filming as part of a scene of any kind could be labeled as “pretend.” In the acting world, the “P-word” is verboten, but it is still applicable to much of it. The phone “conversation” in this video, however, is pure pretend. It is the furthest thing from believable.

First of all, the phone itself is an archaic remnant of A Time Gone By. It’s a classic rotary phone, and at first glance, it appears that the cord from the receiver isn’t even attached to the phone base. It’s actually curled around the base of the phone, obscuring part of the cord behind the table, which is a damn shame considering that this video didn’t need any help in looking like make-believe.

There’s something quaint about sticking to your favored era and steadfastly using the accessories of yore, if that’s your choice. There’s nothing quaint about dozens of women accusing you of rape, and ne’er the twain shall meet.

Also, the argument that this is simply the type of phone Bill Cosby still uses regularly/prefers/is used to is undercut by the awkward way in which he holds it closer to his nose than his mouth. Sure, I’m certain it would still pick up his voice if he held it that way and spoke, but the visual is bizarre and only drives home the fact that he’s not really talking to anyone.

The video was sent to ABC News first, and they report that it was accompanied by a note saying, “Dear fans: I hope you enjoy my wonderful video message that’s filled with laughter. Hey, hey, hey, I’m far from finished.”

I’d argue that Cosby would do well to leave the classic animated character Fat Albert’s catchphrase “hey, hey, hey” out of this mess, but since he has the rights to that character, I suppose he might as well go all in and vocally poop on all memories of roles he created and/or performed, not just Cliff Huxtable.

That “far from finished” motto has been echoed by his camp in the few written statements issued in recent months that also skate by the growing numbers of serious criminal allegations, but this video ups the ante significantly. The forceful audacity to tell us that his video is both “wonderful” and “filled with laughter” could be conflated to the type of aggressive entitlement that exists in the mind of someone who might repeatedly commit sexual assault. And that’s just the note before the video.

Bill Cosby awkwardly nose-shouts, “Yes! I’m gonna be in Wheeling, West Virginia. Capitol Music Hall. 8 o’clock show, that’s right!” Then, in that lowered tone of “Everything’s OK and This Is Funny Because I’m Telling-You It Is,” he adds a menacing: “And you know I’ll be hilarious! Can’t wait!”

So much discomfort packed into a mere 10 seconds. What the hell is this 1940s radio show oddity supposed to even be? Framing it as a phone conversation only made me feel that no one on Earth would be talking to Bill Cosby right now and ask such a specifically leading question as to warrant that answer. But then again, there’s no point in imagining the question that prompted it because there’s no way it’s a real conversation.

As an avant-garde exploration of performative denial, it works. As an intentionally sincere message, it’s the type of forced smile over gritted teeth that would make me back slowly out of the room if I witnessed it in person.

The number of women who have come forward to publicly accuse Bill Cosby of rape and/or sexual assault continues to grow. The first allegation of legal record was made over a decade ago, and his alleged “fixer” has admitted to silencing accusers through the years with payoffs. The allegations resurfaced in the public eye in a major way last year, and here we are in the second week of March in the year 2015 watching a legend in pajamas making a phony phone call on a rotary phone.

It feels like The Twilight Zone, but this is real life. I don’t believe that something this serious will go away if you just don’t say anything about it. Sticking to your guns and not letting the naysayers get you down is admirable in almost any other context.

However, when I ask myself what he could say or do that would be preferable, I fluctuate in my mind between “anything else” and “absolutely nothing.” The situation is dire. I suppose it is Bill Cosby’s prerogative to continue his comedy tour in cities that will still have him, and it’s up to individual choice to attend those shows, whether as a genuine fan or to witness the train wreck in person. But since this video was specifically made to be circulated in the media, it’s willful ignorance as performance art.

Ultimately, Cosby isn’t even talking to me, since the video is addressed to his “fans” and I am not one of them. I’m inclined to believe victims, even when that is one person on their own. When even media outlets have trouble keeping up with the exact number of accusers because the list is still growing? You can keep your “wonderful” video message.

This article was originally featured on the xoJane and reposted with permission.