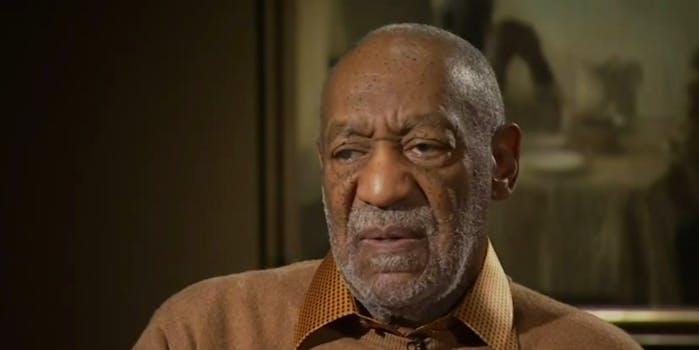 This just gets worse and worse.

The Associated Press has released a video from its Bill Cosby interview showing the comedian not only ignoring a question about the multiple rape allegations against him, but also attempting to bully the reporter into not releasing that part of the interview.

The reporter spoke to Cosby and his wife Camille on Nov. 6 about the Smithsonian Institution exhibit featuring their art collection. The allegations, which began recirculating after comedian Hannibal Buress called Cosby a rapist, came up at the end of the interview.

Just last week, in an interview with NPR’s Scott Simon, Cosby refused to address any of the allegations, merely shaking his head when Simon asked him about them. The AP reporter also brought them up, and this time, Cosby responded by saying, “No, no, we don’t answer that.”

After the interview ended, Cosby tried to prevent the AP from releasing that part of their exchange.

The reporter made it clear that he couldn’t promise Cosby anything, but for unknown reasons, the AP ultimately did cut the footage from the original interview video.

As of today, 15 women have accused Cosby of raping them, including former model Janice Dickinson and Joan Tarshis, and the backlash against Cosby continues to grow. NBC announced Wednesday it was dropping a planned family comedy starring Cosby, and Netflix pulled his comedy special, Bill Cosby 77, which was set to launch Nov. 28. TV Land has also dropped reruns of The Cosby Show from its schedule.

Recently released audio from a 2005 Enquirer interview with Cosby includes some of his thoughts on the scandals. On Wednesday, after BuzzFeed asked Cosby’s attorney to comment on Dickinson’s allegations, the lawyer sent BuzzFeed a letter that said, “You proceed at your peril.”