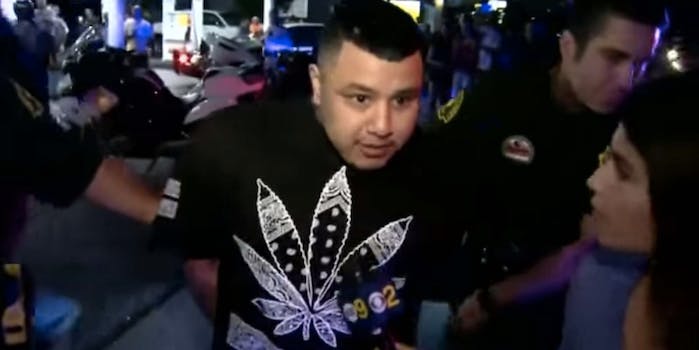 In his defense, that must be one badass selfie.

An unnamed man took police on a surreal motorcycle chase through Southern California for over an hour late last week, running red lights, standing on his motorcycle, and at one point even seeming to take a selfie with his phone.

Law enforcement followed close behind, eager to put a stop to the man’s reckless driving. Here’s what it looked like as he raced through two different counties for over an hour.

He reportedly even took a short break in a cul de sac with his helmet off—not to call home, but to readjust the position of his earbuds. He seems a little lost and forlorn at this point:

The ordeal ended predictably, with the motorcyclist being arrested at a gas station and taken into custody for reckless driving. Here’s some of aerial footage of the guy performing before winding up in handcuffs.