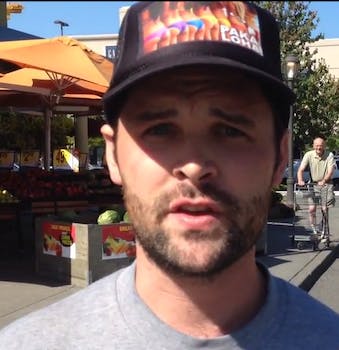 Jake Gillum traveled 160 miles to recover his $2,500 bike, and he detailed the whole operation on YouTube.

This is why you do not steal from bicyclists.

Jake Gillum , a 28-year-old graduate student, traveled 160 miles, from Portland, Ore., to Seattle, Wash., after he found his stolen Fiji Team bike listed for sale on a Craigslist page.

While there, he was able to recover his bicycle and have the alleged thief, a man known as Craig, arrested for involuntarily trafficking stolen goods, a class B felony in the state of Washington.

Gillum posted an edited and annotated video of the sting onto YouTube upon his return. Since going up last night, “Bike Thief Gets Owned” has already racked up more than 94,000 views.

“It’s 6:30 in the morning, and the only reason I am up this early is because my bicycle was stolen from here in Portland about a week ago,” he said at the beginning of the video. “I just found it on Craigslist posted up in Seattle, Wa., about two days ago. I contacted the thief under the alias of Simon Jackson, so now me and a couple friends are going to go up there and get my bike back and hopefully get the guy busted by the cops.

“I don’t think he stands a chance. I wore my lucky hat today.”

Once in Seattle, Gillum revealed his plans for getting his bike back.

“It’s around the corner,” he said. “We’re about to call police and get going on this. I’m going to go into Starbucks and I’m going to text him through my Burner app. It masks and makes it look like I have a 206 [Washington] area code.”

The next shot we see is a shot of Craig in plaid shorts and a blue athletic shirt.

“Okay, so here’s the deal,” Gillum said. “I live in Portland, and you stole my bicycle. And this is my bicycle.”

Craig took off, but Gillum and his friends chased him—on both foot and Gillum’s recovered bicycle. They slowed him down in a parking lot, where the police soon arrived.

There, Gillum showed police the upgrades he’s made to the bike. Craig got arrested shortly thereafter.

“I have him on audio two times admitting that he knew the bike was stolen. I think that information will bury him and make sure that he gets prosecuted,” Gillum said in conclusion. “Today is a good day.”