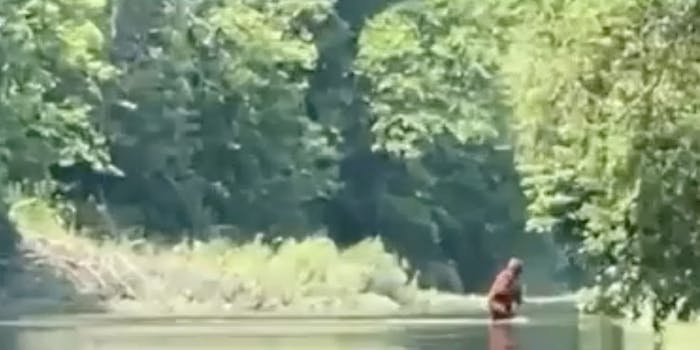 A kayaker is claiming to have filmed a Sasquatch carrying something— possibly a baby Sasquatch or a deer—across a river in Michigan.

The video was posted to the Rocky Mountain Sasquatch Organisation Facebook page on July 12. Voiceover from the video states that it was submitted by someone identified as Eddie V, whose cousin sent it to him after a kayaking trip.

What follows is repeated attempts to slow down the video and gain a clearer picture of what is in the video. At a closer look, the figure thought to be a Sasquatch is reddish-brown and large in size, appearing to be carrying something.

There were no comments on the video when viewed by the Daily Dot, but the Mirror reported that viewers suggested it may be a fisherman in a wading suit.

“Some viewers didn’t believe this was a Bigfoot sighting, saying that the creature in the clip was ‘a guy in waders’ – adding that the area is popular with fishermen,” the Mirror reported.

One viewer who shared the video called it a “terrible costume.”

Another noted it was very close to where they were staying in the area.

The Daily Dot has reached out to the Rocky Mountain Sasquatch Organisation on Facebook for additional context regarding the video.