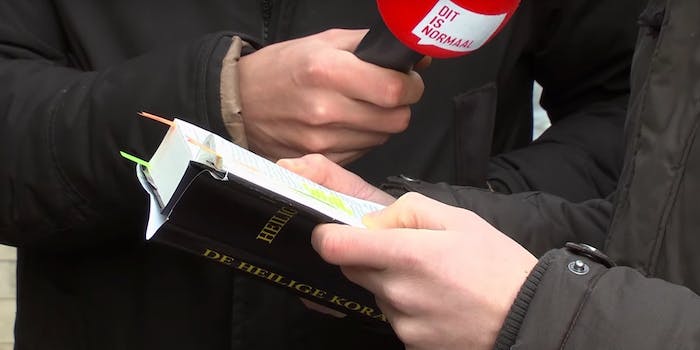 It'll take more than a viral YouTube video to really understand the complexities of these holy books.

Islamophobia is a problem. Not only does it lack a nuanced perspective concerning lived Islam—in all its dizzying complexity—it also takes shape in both vitriolic rhetoric and physical violence against Muslims. Its roots are founded in ignorance of “Islam 101” and a fear of the religion as a fundamentalist figment of Western imagination.

To dispel such misconceptions about Islam, the Dutch YouTube sensation Dit Is Normaal conducted “a social experiment” disguising the Bible as a Quran and hitting the streets of the Netherlands to ask people their opinion of certain verses. The video then went viral, with nearly 6 million views so far.

While the sentiment behind the “experiment” is laudable—trying to show people that prejudice precedes much of our judgment on Islam and other world views—the methodology is defunct and even dangerous. My fear is that instead of combatting religious illiteracy, such efforts could be compounding the problem.

“Our experiment was a way to highlight our prejudice as a society about Islam, one that has been fed to us through mass media over the past couple of years,” Alexander Spoor of Dit is Normaal told the Huffington Post. “The outcome of this experiment pretty much proved our hypothesis to be correct. The responses we’ve been getting from people online are slightly surprising, though. We’ve received so many messages of thankfulness from Muslims from all over the world for making this video. It’s been quite incredible.”

Although the motivations may be noble and the responses encouraging in some respect, it is my contention that comparing the Bible and the Qur’an—much less disguising one as the other and deceiving people— is a slippery slope in attempting to quell religious illiteracy.

The attraction of the video lies in the seemingly barbaric scriptural excerpts that mention women not being permitted to teach and stoning homosexuals. Asked their opinion, the Dutch subjects responded saying the passages were, “ridiculous,” “unbelievable,” and, “aggressive.” Other responders claimed, “The story in the Bible is told very differently.” or, “The Bible is a lot less harsh and a lot more peaceful.” Upon finding out that the quotations were from the Bible and not the Quran, respondents were visibly flustered and embarrassed, with many of them recognizing their simultaneous prejudice and lack of knowledge about the contents of holy texts.

To conflate the Bible and the Quran is to misrepresent both books.

In the U.S., just over half of Americans (54 percent) know that the Quran is Islam’s holy book. Based on that number, it is likely that much less have much knowledge of its contents or if they do, they only know what is given to them by popular pundits, mainstream media, and polemical parties ranging from the liberal to the strictly conservative. This is part of what Dit is Normaal is trying to expose.

Furthermore, the Quran is not Islam’s “Bible” per se. It is much more. As an illustration, the Quran is to Islam what Jesus is to Christianity. It is the very embodiment of the revelation of God. It is received, nor inspired. In the original Arabic, it is the very word of God to the people of Earth. It is the foundation and form of Muslim belief and ritual, providing an outline of their doctrine and a playbook for their piety. It is a complex collection of revelation that, for Muslims, deserves the utmost respect, attention, repetition, and faithful interpretation.

Increasingly, it also demands our attention, respect, and faithful engagement. Cloaking the Bible as the Quran does not lead us in such a direction. Not only are the number of Muslims increasing in the U.S. (both from immigration and domestic conversion), but there are also myriad advocates of Huntington’s “clash of civilizations” thesis and pundits misquoting, or at the very least misinterpreting, Quranic ayahs (verses). In order to befriend and dialogue with our Muslim neighbors, coworkers, and community members in a compassionate, and informed manner we need to approach the Quran with charity and a zeal for apperception from a Muslim perspective, not with our own lenses.

Therefore it is important, as a baseline, to understand that neither the Bible nor the Quran say anything by themselves. The Quran is, by itself, silent. The Bible cannot be understood devoid of centuries’ worth of interpretation and community debate, discussion, and application. The Quran says nothing without the community of context and interpretation that explicates it in relation with the “living Quran” of the Prophet Muhammad’s words, deeds, and teachings (the Sunna). Each text possess its own rules of interpretation, schools of thought, and textual approaches influenced by personal, cultural, historical, and geographical presuppositions and contexts existing betwixt and between text and interpreter.

Making Islam and Christianity seem similarly barbaric and backwards obscures more than it enlightens. Such a “social experiment” may be slick and viral, but it is not useful or profitable as a tool to combat religious illiteracy.

Finally, making Islam and Christianity seem similarly barbaric and backwards obscures more than it enlightens. Such a “social experiment” may be slick and viral, but it is not useful or profitable as a tool to combat religious illiteracy. Neither Islam or Christianity are better understood through such a trick. Instead, individual verses and sections of scripture are ripped out of context and compared, unjustified, with popular misperceptions about different religions and textual traditions.

Instead of lifting the veil on religious illiteracy, which is a laudable goal, this viral video only compounds unlettered conceptions of religions such as Christianity and Islam. People walk away feeling as if they learned, when really all they did was continue to assume that they can understand the complexities of ancient religions through soundbites and isolated scripture quotes rather than engaging in the messy, but fertile, soil of interfaith relationships and conversations.

If we want to better understand the Quran, or the Bible, in the context of lived religion it is necessary that we not engage in clever tricks and social experiments, but instead enter into the interpretive milieu of texts such as the Quran and engage with its contents in conversation with Muslims—both laity and trained legal scholars.

Opportunities for such study abound. The newly released Study Quran can be a great place to start. While it is inadvisable for a non-Muslim who wants to discover more about Islam to randomly grab an English-language Quran and start reading, resources such as The Study Quran offer an accurate and understandable interpretation of the Quran with multiple commentaries from various perspectives. However, the next step is to read the text in community and to discuss the verses that refer to violence so as to see how they are understood, explained, and applied in the modern era and as part of the painful reality of the human condition. The same could be said of the Bible and its lesser-known unsavory portions.

In the end, the greatest evil here is the religious illiteracy that undergirds all of our presuppositions and reactions to ploys such as Das It Normaal’s. The challenge before all of us is to confront the uncomfortable in all of our world views—religious or secular—and instead endeavor to share an ethos that comes to terms with the contradictions and differences between us while not abandoning dialogue and relationships in the exchange of ideas.