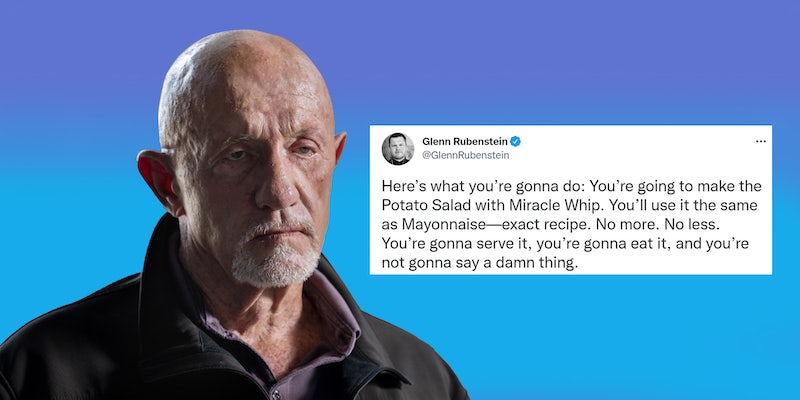 If Mike tells you to do something, do it.

Is there a more reassuring voice on TV than Mike Ehrmantraut?

As someone who’s had to clean up many messes for druglords and corrupt lawyers throughout both Breaking Bad and the prequel/sequel series Better Call Saul, Mike (as played by the great Jonathan Banks) is not one to put up with someone’s shit. But, as a new meme demonstrates, Mike Ehrmantraut can also be incredibly adept at talking the people whose messes he cleans up, and the rest of us, through any situation.

The origins of the “here’s what you’re gonna do” meme take Mike’s reassurance skills to the extreme as Better Call Saul marries its two halves (the lawyer side and the cartel side) together. At the end of “Point and Shoot,” the midseason premiere of the show’s final season, Mike and his crew arrive at the apartment where Saul Goodman (Bob Odenkirk) and Kim Wexler (Rhea Seehorn) share to cover up Howard Hamlin’s (Patrick Fabian) murder at the hands of Lalo Salamanca (Tony Dalton). Mike goes as far as to sequester the couple in their bedroom as his crew removes the body and cleans up the crime scene.

“Alright, here’s what’s gonna happen,” Mike explains. “In a few days, Howard Hamlin’s car will be found several states away by the water. The odometer will have rolled to the exact number of miles it took to get there. There will be cocaine in the upholstery. That’s the story you were setting up for this guy, yeah?”

The rundown, which includes how Saul and Kim should handle the inevitable questions they’ll get from the police about Howard’s “disappearance,” doesn’t judge their actions even though he’s fully aware of their plans to ruin Howard’s reputation. It’s both about ensuring Gus Fring’s (Giancarlo Esposito) role as a druglord stays hidden and keeping Saul and Kim out of jail so they don’t rat anyone out; it also echoes Mike’s very first scene in Breaking Bad. It’s just one more thing Mike has to do in his line of work.

In the immediate aftermath of the episode, fans latched onto the function of the scene, which is how comforting it might be to have Mike Ehrmantraut walk you through a situation.

But several weeks later, a slightly tweaked version of Mike’s message to Saul and Kim—“here’s what you’re gonna do” instead of “here’s what’s gonna happen”—morphed into a meme format. The posts, which are usually accompanied by a promo photo of Mike from Better Call Saul season 5, offer similar messages of reassurance. It doesn’t matter what’s being said, but the suggestion is the same: If you’ve ever watched Breaking Bad or Better Call Saul, chances are you can hear whatever task you’re being walked through in Mike’s distinct voice.

Some joked about planning real-life heists around obtaining canceled films.

The SparkNotes account also had some fun adapting the plot of Romeo and Juliet for the format. (Obviously, Romeo wasn’t as good at listening to Mike’s plan as Saul and Kim.)

One version referenced a minor plot point from the penultimate episode of Better Call Saul, “Waterworks.”

And, naturally, there were some hacks about sports and other aspects of real life.

Time and again, Mike is one of the more level-headed characters in the Breaking Bad universe. And with both his knowledge and the power of hindsight, we tend to see just how often he’s right. For us, it’s another level of assurance: If Mike talks, we might want to listen.