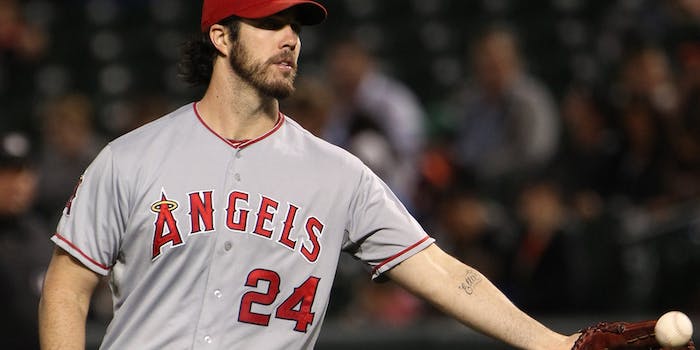 Arm yourselves with the best of social media heading into the second half of the season.

We should be watching baseball today. We should be recovering from our hangover from Tuesday’s All-Star game by drinking a little hair of the dog. But instead, this country’s oldest national pastime is off the grid until Friday. Even watching two sub-.500 teams battle it out in front of 12,000 fans would be comparable to no baseball whatsoever.

But as always, Twitter is there for your entertainment. Nothing is happening on the baseball fields of America tonight, but that doesn’t mean that the discerning baseball fans can’t entertain themselves waiting for Friday’s action with some quality baseball-centric accounts.

Here are 10 of our favorite MLB Twitter feeds, in no particular order. Because if you can’t read about a pitcher suggesting a ménage à trois to his wife, what’s the point of signing up for social media in the first place?

We enjoy it when professional athletes show their quirky side. McCarthy certainly qualifies as having one of those.

Not to mention an understanding wife.

Somehow I feel like this dog is better off on her own. pic.twitter.com/A5Lnoimns6

As the Twitter bio states, this account provides a “photo history of everything MLB ballparks, past & present.” And it’s beyond awesome if you love looking at long-lost stadium relics of the past. Since it’s such a cool feed, here are three examples of what you’ll see if you press the follow button.

Great American Ballpark, site of this year's ASG, with a freshly imploded Riverfront (Cinergy) Stadium next to it. pic.twitter.com/o7r4GrvT4P

3 of the oddest walls:

Probably the funniest baseball account out there. Radbourn, a pitcher and rightfielder, played 11 years of pro ball—mostly in the 1880s—and he was inducted into the Hall of Fame in 1937. He died in 1897, but that doesn’t mean he can’t be resurrected for this life in order to haunt us.

103 — A. Chapman' fast ball speed and the temperature of the fever that killed me in the great typhus outbreak of '88.

If you must use fireworks, please do so for their intended purpose: for assaulting fortifications or announcing the new T'ang emperor.

If you like to ponder the history of baseball, Thorn is your man. He tweets old-timey photos, old-timey newspaper articles, and old-timey everything else. Thorn pairs nicely with MLB Cathedrals.

This account isn’t witty. It’s probably not going to make you laugh. Or get you so worked up that you can’t think straight. No, this account is about jersey numbers—who’s wearing what and where and who wore it the time before—and jersey numbers only.

There are a number of national baseball writers—the guys who break the most news, major or minute—one could follow, but since I used to work at CBS, I’ll go with Heyman, who continuously churns out tweets that are either newsworthy or semi-interesting. Another national reporter to follow is Fox Sports ace Ken Rosenthal.

how good a baseball town is cincinnati. while todd frazier hit, food concourse was completely empty. not a soul (except me)

Though in the past several years, SABR has become associated with Sabermetrics in determining the baseball statistics that truly matter, this is actually a society that researches—and loves the hell out of—the game. As the society writes on its website, “SABR members have a variety of interests, and this is reflected in the diversity of its research committees. There are more than two dozen groups devoted to the study of a specific area related to the game—from Baseball and the Arts to Statistical Analysis to the Deadball Era to Women in Baseball.”

Because sometimes you just need to follow probable future Hall of Famers who will feud like crazy while spelling out conspiracy theories.

What a crock of crap! Oswald killed Kennedy? Seriously? Sorry, but I'm watching JFK. It's almost laughable what they want us to believe.

Y'all think if they took all them gators they trap in Fla and La and put them in the Rio Grande, it wud stop the illegals from crossing? Jk

He doesn’t have nearly the Twitter followers of McCarthy, but Haren’s Twitter handle is light years more outstanding and he can be just as funny.

Chapman's fastball is about 15 mph harder than mine. That's the same difference between me and mo'ne davis.

And Haren can burn with the best of them, like when Vernon Wells, who’s no longer in the league, asked if Haren would toss BP to him.

@VernonWells10 you need to get in shape for an adult softball league or something?