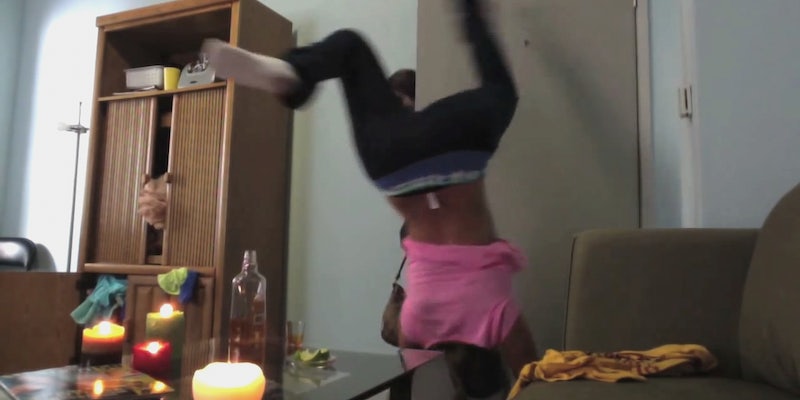 But what made 2013 notable was that some of the most important stories never actually happened. They were complete lies.

It’s that time of year again. Your Facebook newsfeeds and Twitter timelines are about to fill up with end-of-year lists in every possible classification. There are infinite ways to categorize news—from the general, like the most influential people of the year, to the specific, like the most retweeted tweets by athletes in 2013. But what made 2013 notable was that some of the most important stories never actually happened. They were complete lies. Hoaxes.

This list is a tribute to the pranksters, the people who made countless people and media companies—including this one—look gullible and unprofessional. These are folks who drew in readers with thought-provoking YouTube videos and gut-busting tweets, only to punish us for ever believing any of it. 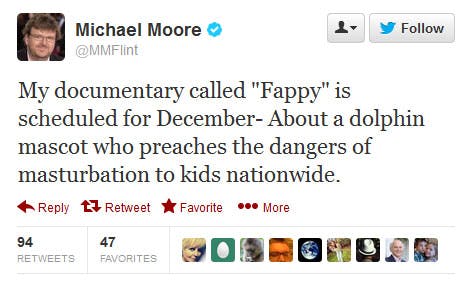 Michael Moore has directed some of the most provocative films of the past 24 years. So when a press release began circulating from a suspicious-looking site about his next film, Fappy, about an anti-masturbation dolphin, people began to wonder.

The film was due out this month. To give it an air of legitimacy, the people behind the prank created the following fake tweet from Moore’s account.

No such interview can be found. And to this date, the source of the hoax is unknown. 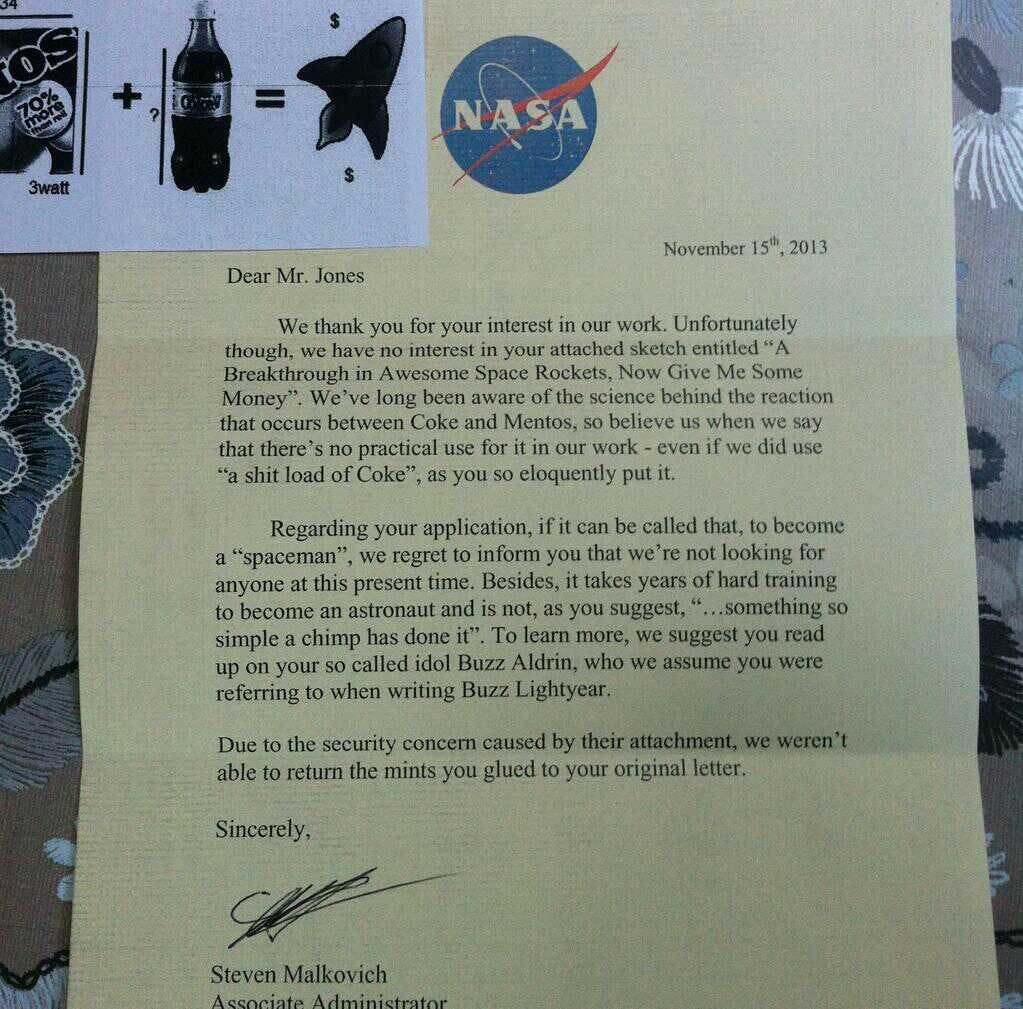 NASA was tired of being the butt of the Internet’s jokes (see No. 6).

For the second time in the past two months, the space agency has been placed at the center of an online hoax. The latest attempt comes from the United Kingdom’s Jamie Jones, who posted the following NASA correspondence on his blog today regarding a “new” form of rocket propulsion.

Unwilling to be taken advantage of again, NASA set the record straight on Twitter.

This letter (https://t.co/eapIRX8Y5S) isn’t from us, but we do reply to your snail mail. Write us: https://t.co/dSoGqUE71r #PenPal

Jones has a long history of viral forgeries. He previously produced fake letters from Guinness World Records, Cadbury, and webuyanycar.com. 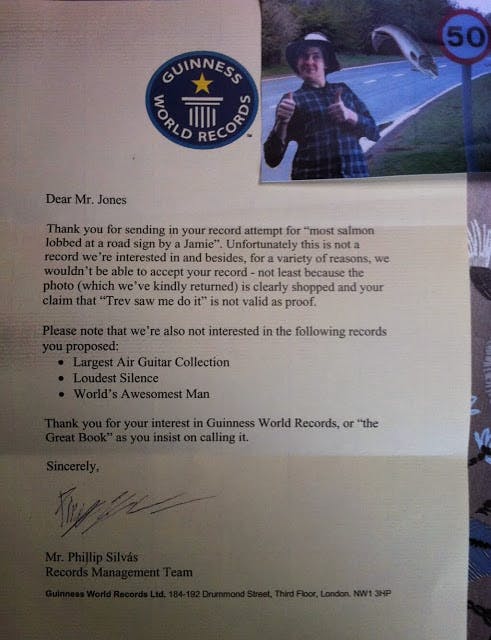 While waiting for a flight home for the holidays, Elan Gale, a producer on The Bachelor, tweeted about a note and drink he had sent to a female passenger on his plane after a flight delay caused her to complain.

The story was the perfect mix of holiday travel angst and a rude target: “Diane.”

BuzzFeed was one of the first organizations to break the story, claiming Elan “won” Thanksgiving. Other news organizations were less complimentary. Gale responded to online criticism of the situation by telling people they could eat a part of his anatomy, just like he told Diane in one of his notes. Elan also wrote a blog post explaining why he was right to antagonize Diane, before concluding that we should all be kind to each other. He just wanted to teach her a lesson.

He also taught the world one too. Don’t believe everything you read, especially when the writer is in the business of making things up for TV. 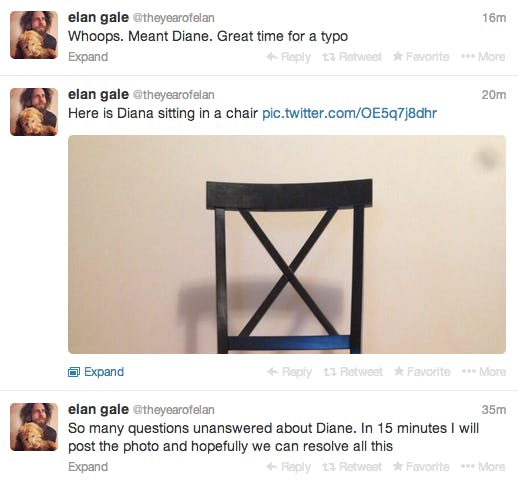 “Anyone who would scroll back [through my tweets] would see what I am all about as a tweeter,” Elan told ABC News. “My thought was I can’t believe anyone is taking this seriously. I thought, ‘Why isn’t anyone doing any fact checking?’ Then I saw it was on the evening news in Sacramento and it became this totally absurd thing.”

Brittany Ozarowski was a 20-year-old living with a laundry list of ailments only seen in Lifetime movies.

And if that wasn’t enough, Ozarowski also had stage two ovarian cancer as well as stomach cancer

Over the next two years, Ozarowski’s raised more than $150,000 for her treatment. That included $100,000 from her grandmother who sold her house, $25,000 from her father who cleaned out his IRA portfolio, and a nearby man named Walter Warren, who lost his son to cancer in 2007 and vowed to help Ozarowski with whatever it took.

Ozarowski’s story sounded too good to be true. As it turns out, it was.

Instead of cancer treatment, Ozarowski used the $150,000 to feed her heroin addiction.

A breast cancer survivor in Medford, New York, got suspicious of Ozarowski’s activity and eventually called the police on Ozarowski. She was arrested on April 8.

“This defendant perpetrated an absolutely despicable scam,” Suffolk County District Attorney Thomas Spota said in a statement. “There was no cancer, no chemotherapy, no radiation, and no medical bills. There was just heroin.”

The story began on Oct. 1, the day the U.S. government shut down, placing about 800,000 federal employees temporarily out of work in a partisan dispute over the Affordable Care Act. The furloughed employees included 17,400 NASA staffers, leaving a skeleton crew to monitor crucial operations like the International Space Station.

At about 4:16pm that day, the clandestine marketing group and YouTube botting troupe called SocialVevo registered rememberthe13th.com. It was a few hours after NASA tweeted that because of the shutdown, all public activities and events would be canceled or postponed.

By that evening, Remember the 13th was fully operational. The site featured a cute rocketship, social media buttons, and a promise to release the “biggest discovery that will shake the Earth” on Nov. 13. And in the top left-hand side of the page was the official NASA logo.

This got netizens wondering, if NASA was shut down, how could it orchestrate such a groundbreaking scientific reveal? It couldn’t. But because NASA’s un-furloughed employees are tied up with crucial work, debunking an Internet hoax wasn’t on their agenda.

Thankfully, Reddit and 4chan users have plenty of time on their hands.

By Oct. 3, Remember the 13th altered its message and removed the NASA logo.

“DUE TO CHANGE IN PLANS, WE WILL ANNOUNCE THIS DISCOVERY EARLIER THAN PREVIOUSLY EXPECTED. TUNE IN ON OCTOBER 6TH TO SEE WHAT EVERYONE IS TALKING ABOUT,” the site read.

This was the grand reveal. And that story is only beginning. 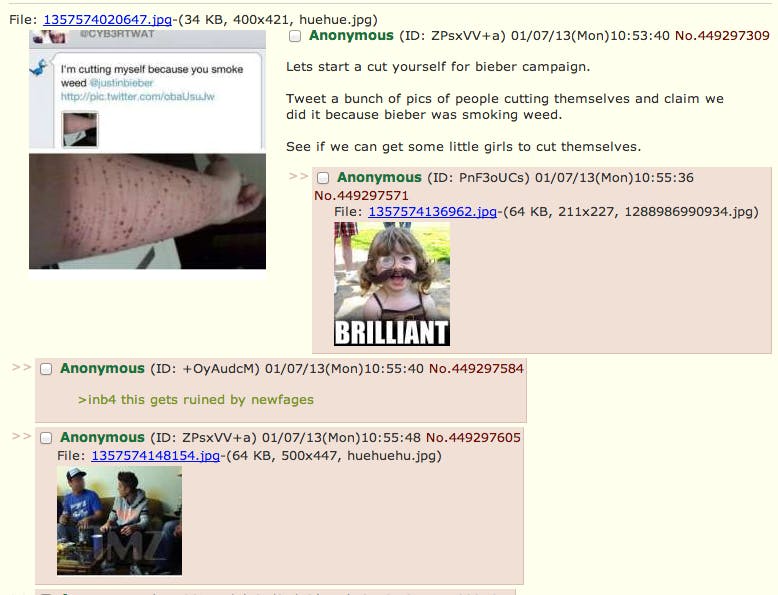 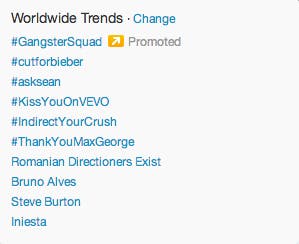 Justin Bieber was tabloid fodder after a photo of him allegedly smoking a blunt was leaked online. The photo was a blow to the teenage heartthrob’s semi-squeaky-clean image, particularly with his young and impressionable fans on Twitter. This was a perfect opportunity for 4chan’s random imageboard /b/ to wreak havoc.

“Tweet a bunch of pics of people cutting themselves and claim we did it because bieber was smoking weed,” the individual wrote. “See if we can get some little girls to cut themselves.”

The hashtag #cutforbieber went worldwide shortly thereafter, inspiring gruesome cutting episodes grotesque enough to make you lose your lunch. It became  the most popular hashtag on Twitter some time around 2:30pm. By 3pm, the /b/ thread had been taken down.

/b/ followed up with a second prank hashtag, #boobs4bieber, in the hopes of flooding Twitter with underage nudes from Justin’s tween army. 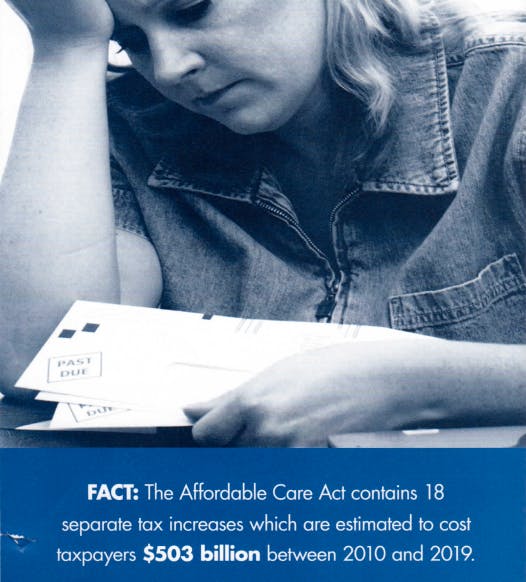 In the history of tech debacles, there hasn’t been one as big since the launch of President Barack Obama’s healthcare.org. Crippling back-end problems and reports that the entire infrastructure was build on plagiarized code made the site the tech punchline of the year. If that wasn’t bad enough, in early December, California Republicanas distributed mailers requiring people to sign up for insurance under the Affordable Care Act. These citizens were directed to the site CoveringHealthCareCA.com, where they received a lot of political gumbo. California’s real health care site was CoveredCA.com.

The mailers, which were distributed by staffers of Assemblyman Scott Wilk (R-Santa Clarita), took a more neutral tone toward the Affordable Care Act than the site it directed users to.

The setup couldn’t have been more perfect. For nearly three years, a mysterious YouTube channel called Pronunciation Book had been releasing simple videos with a voice repeating a word or phrase, sometimes an example sentence. Most videos ran for no more than 10 seconds. That pattern changed in July. That’s when it started posting one cryptic video a day, counting down from 77 until Sept. 24, 2013. What was it for? We guessed a Battlestar Galactica sequel. Everyone was wrong.

Meanwhile, Twitter was smitten with a bot with a horse avatar that tweeted beautiful nonsense—random snippets of online text (“We all agree, no one looks cool”) that occasionally resembled poetry.

The Daily Dot’s Gaby Dunn found out who was behind Pronunciation Book—artist Thomas Bender and BuzzFeed staffer Jacob Bakkila—in July and began tailing them. They promised us a scoop before the big reveal, then went radio silent. Turns out they had an even bigger secret to protect.

On Sept. 24, in front of a small audience at the Fitzroy Gallery on Manhattan’s Lower East Side, Bender, Bakkila, and journalist Susan Orleans unveiled a new project, a webseries called Bear Stearns Bravo.

“A few people who know Jacob better than I do have referred to him as a ‘notorious old school Internet troll’ but say they didn’t know anything specific,” BuzzFeed Senior Editor Summer Anne Burton told the Daily Dot.

The video starts with a girl turning on her favorite tune. She begins to dance, then drops to the floor for a handstand twerk against the door. As she shakes it, the door opens and tosses the girl onto a table of lit candles.

The YouTube clip was reported virtually everywhere, from Buzzfeed to the New York Post. With its “certified viral” status cemented, late-night talk-show host Jimmy Kimmel let the world in on his joke on Sept. 10.

The woman behind the twerk was actually stuntwoman Daphne Avalon, who was sworn to secrecy. The clip was actually filmed two months earlier. The version that hit YouTube a week ago leaves out Kimmel entering through the door in an outfit matching Avalon’s and putting out the flames via fire extinguisher.

“Thank you for helping us deceive the world,” Kimmel told Avalon, “and hopefully put an end to twerking forever.”

It’s a doozy of a story. The most heartbreaking and inspirational sports story of the year, really.

Notre Dame linebacker Manti Te’o supposedly met Lennay Kekua in November 2009 at a Stanford game. Their relationship played out in front of the world on Twitter, where Te’o, who has 165,000 followers, tweeted back and forth with one of Kekua’s accounts. 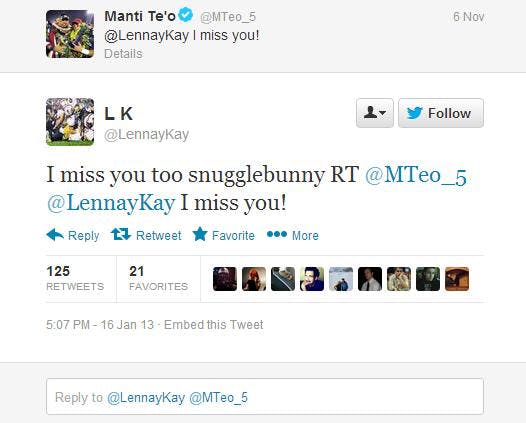 Te’o’s relationship ultimately became one of the most reported stories of 2012 after Kekua died from leukemia within days of Te’o’s grandmother passing away. Te’o didn’t attend Kekua’s funeral because of a game that same day against Michigan (Notre Dame won 13-6).

The tragic news helped boost Te’o’s image. He landed on magazine covers and sports shows like ESPN’s Pardon the Interruption where he reflected on the loss of Kekua.

A blockbuster Deadspin article unraveled a web of suspicious Twitter accounts and misused photographs that allegedly show how Kekua was not even a real person, let alone Te’o’s girlfriend. The article also alleges that Te’o was in on the scam. Notre Dame issued a public statement saying Te’o was the victim of “a sad and very cruel deception.”

While Te’o’s debacle may seem like an eternity ago, the revelation set the tone for the rest of 2013.