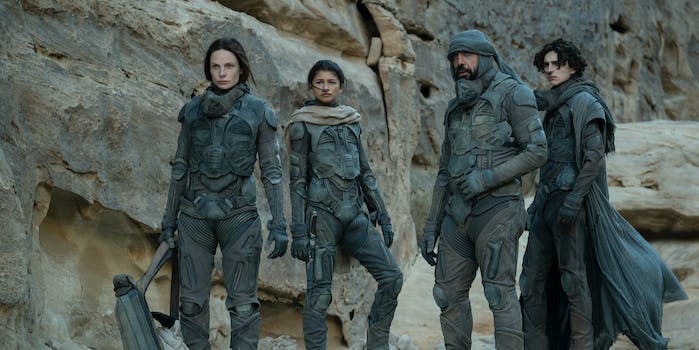 Here are the best ‘Dune’ memes

The memes must flow.

Dune, by most metrics, is a hit. It’s critically acclaimed (the film is sitting at 83% on Rotten Tomatoes and 74 on Metacritic), it’s generating Oscar buzz for both director Denis Villeneuve and for several technical categories, and with a $40.1 million debut at the domestic box office last weekend, it’s the biggest opening for any film released simultaneously in theaters and HBO Max to date—and just days after it launched, Legendary Pictures confirmed that Dune: Part Two will indeed happen. But, on some parts of the internet, Dune has turned into a meme goldmine decades in the making.

Despite the perceived barrier of entry (Villeneuve’s film is based on an incredibly dense book), Dune memes work no matter how familiar you might be with Herbert’s world and regardless if you’ve seen the film. In fact, some of the joy comes from new fans discovering just how weird Dune actually is. After the 1984 film by David Lynch (who hated it so much that disowned it), the line “the spice must flow” became a meme. Given that Dune heavily influenced Star Wars and several sci-fi properties, there are many comparisons to make. And that’s only scratching the surface.

Unlike some films where memes can make or break a movie, Dune memes easily enhance it. If you loved the film, you have a way to contextualize it. If you are unfamiliar with Dune, the Dune text provides plenty of fun and WTF in stride. And if you didn’t like it, well, there are a lot of silly elements to poke fun of.

On the other end of the spectrum, it makes the names familiar to us all the more jarring. Game of Thrones had Jon Snow. Lord of the Rings had Sam Gamgee (even though his full name was a bit more fantasy-friendly). Star Wars had Luke Skywalker. And Dune has Paul Atreides, the so-called Chosen One of the series, something that is complicated by its sequels.

Dune, like many sci-fi/fantasy epics, has a wide berth when it comes to the names of places and characters. Some locations and names are creations of the author and are hyper-specific to the fictional worlds created; in Dune’s case, many of those names and words are heavily appropriated from Islam.

Granted, he’s not the only one whose name sounds strange in a sci-fi epic; Paul’s mother, the Lady Jessica, is right there beside him.

And, of course, there’s Duncan Idaho, a perfect sci-fi name that is tripping people up more than almost any element of Dune. Even non-Dune fans are mystified by the very name of Duncan Idaho, even if they’re fully unaware of just how weird his book plot eventually gets. Part of the charm is in the Duncan Idaho character, part of it is in Jason Momoa, part of it is Momoa as Duncan Idaho.

Even Villeneuve is a fan as he offered his thoughts on whether Duncan Idaho was a cool name to Vulture.

“Personally, I deeply love it,” he said. “I love that Frank Herbert gives hints of Earth culture. You have links with the Catholic religion, or Middle Eastern cultural elements. They are hints that these people were coming from Earth, and then they expanded into the galaxy. And ‘Duncan Idaho’ roots it to Earth. So personally, I don’t know what your position on it is, but I love it. I think it’s the best.”

2) Other movies and TV shows as Dune

One of the internet’s favorite activities is to slap a film’s name a la One Perfect Shot next to another to highlight similarities, and Dune is no different. Sex and the City, Parks and Recreation, and the Spice Girls all fit the bill.

There was even someone who imagined what Dune as directed by Joss Whedon would look like that was very on the nose.

And the Letterboxd reviews have also been very good.

In Dune, Paul Atreides is made to put his hand inside of a box, which will make him experience the worst kinds of pain. The test, administered by the Reverend Mother of the Bene Gesserit (the religious sect his mother is part of), is to determine whether Paul is “human” (meaning he can withstand the pain). If he takes his hand out, that will mean he is an animal, and he will be instantly killed by a poisoned needle positioned at his neck.

Paul passes, making him a human in the eyes of the Bene Gesserit—otherwise, it would be a short movie. But the test can also almost double as a kind of metaphor for the internet…

Villeneuve is a director who’s been quite vocal in his support for the theatrical experience and his desire that people watch Dune on the biggest screen possible and with the best sound system available such as IMAX (versus the comfort of your home on HBO Max). It’s a sentiment that’s well-intended, but because of several mitigating factors like price, accessibility, and still being in the middle of a pandemic. What tends to follow is both jokes and rehashed arguments about a director’s naïveté about the harsh realities of the theater-going experience for most people.

Granted, many of those who’ve seen Dune in theaters have found the experience to be an exceptional one. Still, it’s fun to imagine watching Dune on the tiniest and poor-quality screen possible, even if means Photoshopping a sandworm onto a Zune to get the desired effect.

5) ‘You thought Dune was wild? Wait until you find out what happens in the sequels!‘

Villeneuve’s Dune only adapts one-half of Herbert’s novel with Legendary Pictures greenlighting Part Two on Tuesday. It remains to be unseen how much Villeneuve and his collaborators will touch the sequels in future films (though he does say that Dune: Messiah is part of the ideal plan).

Currently, there are a few ways of experiencing what happens in subsequent Dune books. You can read them for yourself. You can search for plot summaries on Wikipedia. Or you can try to decipher the real plot points that book readers have mentioned about the sequels. (Ghola Duncan Idaho is only the beginning.)

Like many blockbusters, Dune’s promotional posters include a mashup of the ensemble cast; the bigger your face, the more important your character usually is. That format tends to be rife for Photoshopping, and Dune is no exception.

The internet operates on puns.