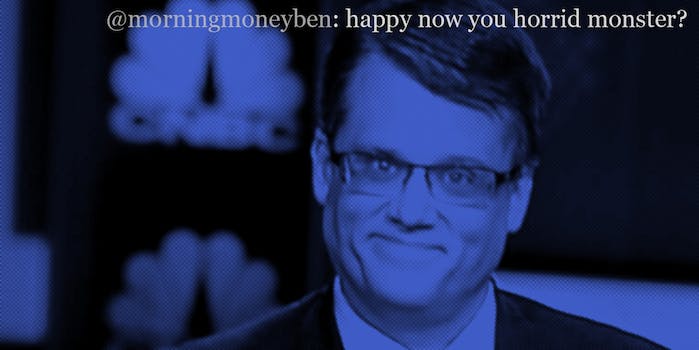 Don’t tell this Politico reporter his face is “meh”

Ben White will freak out, call you a "horrid monster," then block you. Then he will change his Twitter avatar.

Hilary Sargent accidentally unleashed a Twitter storm from Politico reporter Ben White after she told him she was unimpressed by his latest profile pic. As her account spread around Twitter on Sunday, the irony was hard to handle—it was during a controversial day of silence in protest of the abuse women often face on Twitter when they speak out.

Sargent, founder of Chartgirl.com, Storified the avalanche of attacks that came her way after her response (scroll down to view). She explained why she commented in the first place: She’d recently interacted with White over his snub on a list of the “40 sexiest financial journalists.”

But White was appalled. He retweeted Sargent’s tweet with “Why would you say something like that? What is the matter with you?” Then, in a series of now-deleted tweets (recorded on Sargent’s Storify), he berated her. “You don’t just say someone’s photo is ‘meh,'” he stated at one point. “It’s rude and mean. That should be manners 101. It’s not complicated.”

After changing his picture back to the old profile pic, he asked Sargent, “happy now you horrid monster?” Then he proceeded to make fun of her profile pic. Sargent pointed out that for women, having strangers idly comment on their appearance isn’t a matter of Manners 101—it’s an everyday reality:

I look forward to the day when a construction worker comments on @morningmoneyben‘s ass and he shoots the guy in the head.

For his part, White gradually calmed down and realized he might have overreacted.

If you comment on Ben White’s Twitter profile photo, he will FREAK OUT, call you a monster, + block you. Then he will change his pic.

“I suppose that did get a touch out of hand,” he responded.

The spat ended with an email apology from White. He unblocked her. The two now follow each other. After deleting most of his tweets from the debacle, White finally commented: