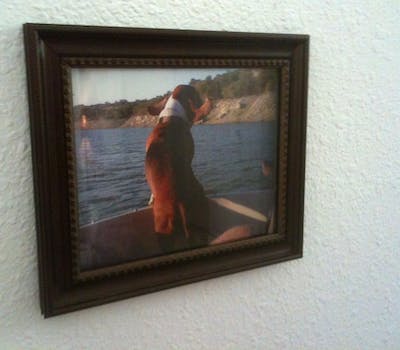 Here's what one man did when he got a text photo of a stranger's dog.

Ben Beesley didn’t ask for anyone to send him a photo of a dog on a boat. He would have been happy enough without one. But when a random stranger texted him the photo thanks to a little finger slip (it happens), he decided to have some harmless fun.

“I will cherish this picture of your dog forever,” Beesley texted in response to the photo. “Thank you, random stranger.”

And Beesley meant what he said.

In a front page post on Reddit today, Beesley showed how he framed the photo and mounted it on his wall. The post collected more than 10,000 upvotes and 664 comments.

Beesley received the photo while at work. Before leaving, he e-mailed it to Walgreens for it be printed. He also picked up a frame. Once he got home he hung the frame next to his fireplace and sent a photo of it to the stranger with the message, “My wife and I had been looking for a good picture to hand there.”

The stranger responded with, “That’s awesome. Bently or Mr. B is a pretty cute dog.”

Beesley didn’t tell him however, about the attention it’s been getting on Reddit because “I don’t want to make him regret accidentally sending it to me,” he told the Daily Dot. “From his end, I hope he appreciated the joke. If it gets back to him somehow, then he may take it better.”

Some redditors were skeptical about Beesley’s story. But most commended him on his follow through.

“Every time you look at that picture you will smile and think about this. And when people ask you about it you will have a funny story to tell,” wrote klaent. “That’s what art should do, make you think and talk. You should write down the story on the back of the frame for future reference.”

Beesley verified his story with the Daily Dot by showing us the conversations he had on Facebook about the photo.

“The picture will remain there and definitely will be something my wife and I can look on whenever we want a smile brought to our face,” he said “Years from now, I believe it will have that same impact.”