An email fail on Wednesday evening at the University College London (UCL) has left all 29,000 thousand students at the institution able to email one another—resulting in thousands and thousands of spam messages being sent overnight, as well as subscriptions for everything from the Sarah Palin channel to hardcore pornography.

Dubbed #Bellogate, it all began with an email allegedly from university provost Michael Arthur—though student tabloid The Tab reports that it was an impostor. The email was a single word—“bello!”—and was sent out to a student-wide mailing list to the everyone in the nearly 30,000-strong student population.

Sparked by this strange email from the Provost #bellogate pic.twitter.com/OOdCX4ogyc

From there it spiralled out of control; reply-all messages abounded, the address was subscribed to all manner of mailing lists, and the student body  lost its collective mind. As of Thursday morning, UCL students and faculty members had received almost 3,000 emails.

Shoutout to whoever’s responsible for #bellogate! Nothing like waking up to 3000 emails

Some of the initial reply-all responses didn’t veer far from the script, opting just for a “bello!”

Others were particularly uninspired.

So out of the 1006 ucl bello emails someone has managed to inform everyone about a missing ruler #bellogate pic.twitter.com/KqCfMOrmX4

Then people got a bit more risqué.

Someone @uclnews is going to have a fun morning cleaning up this mess #bellogate #bello pic.twitter.com/IUPsE67eVX

The opportunity was seized to rekindle some old university student rivalries.

Kings College just got an application from All UCL Students. They have to accept us, we got into UCL. #bellogate

To the KCL student who emailed all 26k students of UCL just to ask if our emails were fixed yet – you’re a prize tool. #bellogate

Sports fans got in on the action.

Bello supports the one, the only @SpursOfficial ! #bello #bellogate pic.twitter.com/4A0NH5AOPT

As did One Directioners.

#BELLO YOU LIGHT UP MY WORLD LIKE NOBODY ELSE! #bellogate pic.twitter.com/0XccvvL9Bd

Thanks to the UCL email fiasco, UKIP has gained 30K new members. Unfortunately 1/3 of those are international students #dilemma #bellogate 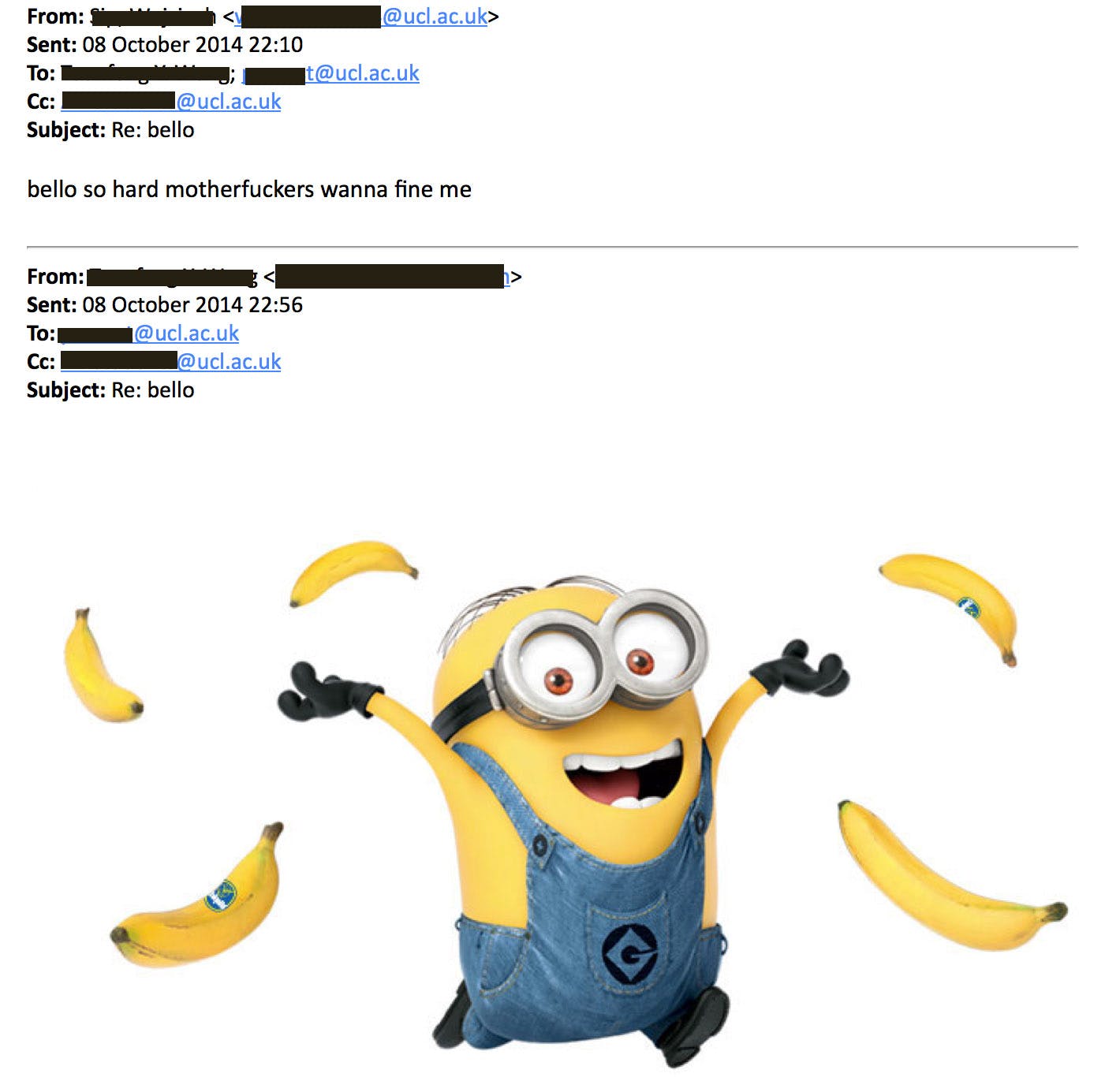 Meanwhile, official UCL administration emails were either compromised or impersonated.

Something tells me this email wan’t really from the service desk. #bellogate pic.twitter.com/MM5zUC3PTI

Memes ricocheted across the Twittersphere.

The frenzied activity pushed the hashtag #bellogate to the top of the U.K.-wide Twitter trending charts overnight.

#bellogate is trending No.1 in the UK. At this point, UCL more or less has to capitalise on it and adapt all publicity to be bello based

Students then decided to bring bello into the real world.

Some took the opportunity to revel in the schadenfreude of it all.

Love it that UCL is trending through #bellogate rather than its recent Nobel prize….

I feel really sorry for all the poor souls who didn’t set up an email rule when all this #bellogate stuff started. #2500Emails #UCL

PhD student Carrie Behar has been one of the few voices of reason.

UCL students – avoid checking your email if you can. We’ve all been spammed with 2500+ emails & it’ll clog up your phone #bello #bellogate

Some students are taking a rational approach to the problem.

If anything, the #bellogate UCL email hack flooding my inbox has exposed the dearth of witty one-liners among today’s students. Poor show.

Not all the emails were harmless fun, as a tweet from another PhD student reveals.

With over 2,000 juvenile, racist and homophobic emails sent overnight it feels a bad time to email my students. #bellogate

A statement issued by UCL on Monday morning acknowledged the “urgent problems with all student email—but significantly underestimates the scale of the problem. 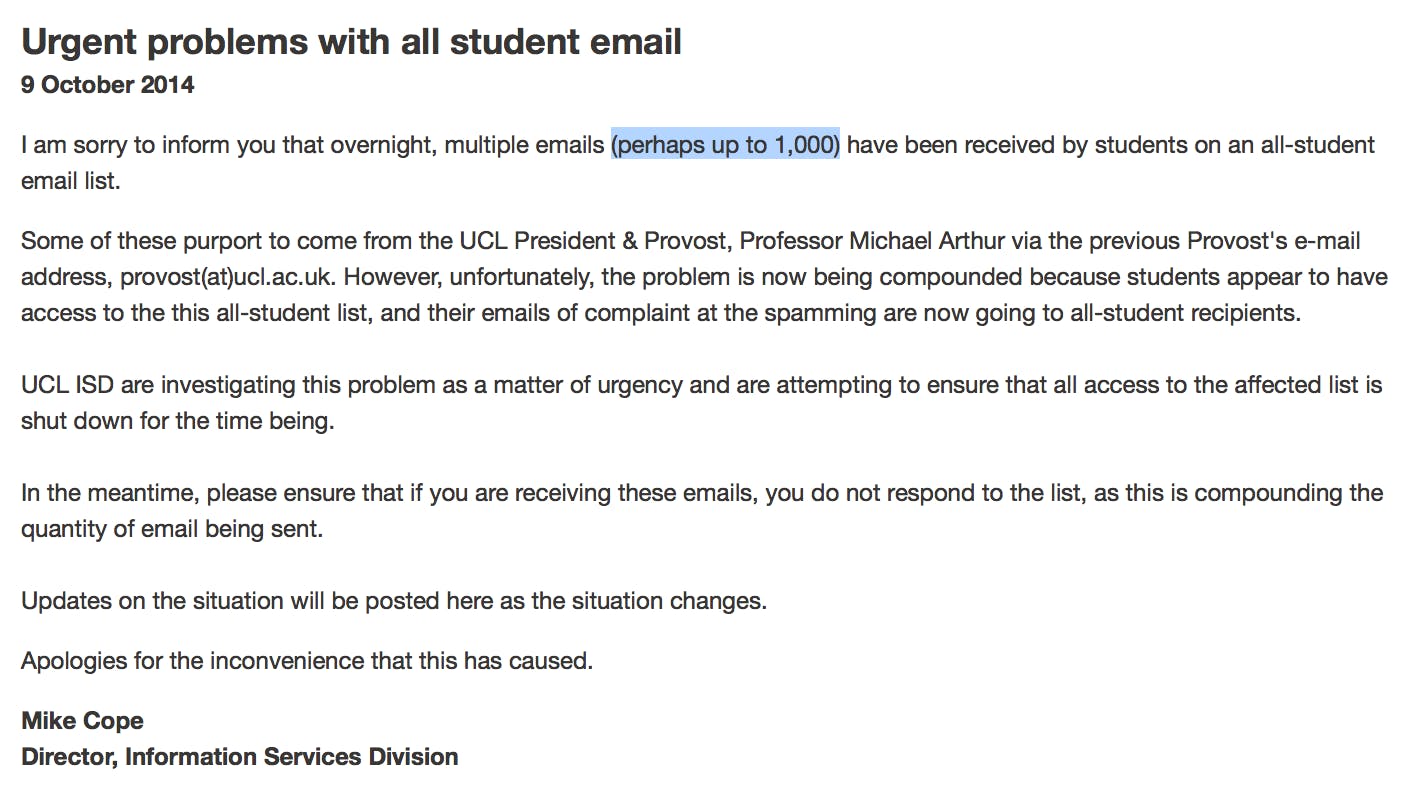 UPDATE: The email address has been blocked and #Bellogate is officially over, a current UCL student has confirmed to the Daily Dot—and recriminations and finger-pointing have already begun.

The provost is currently traveling, the Daily Dot has been informed, and is not immediately available for comment.