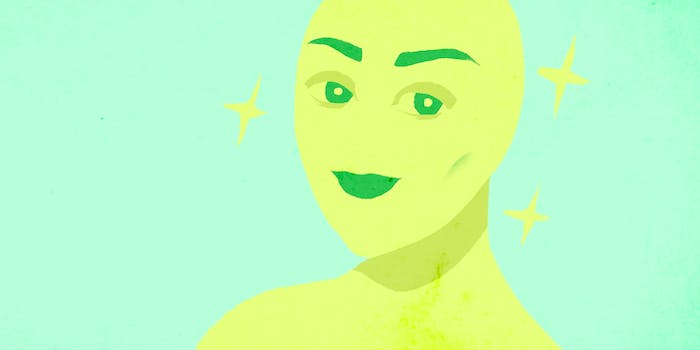 The ‘before and after contour’ meme is magically transformative

Life can be divided into two different parts: before contour and after contour.

What is contour, you ask? Well, it’s the makeup trend that’s been all the rage on Instagram and YouTube tutorials over the past couple of years. Kristen Stewart‘s longtime makeup artist Beau Nelson told Teen Vogue that “[c]ontouring is giving shape to an area of the face and enhancing the facial structure through makeup.” It’s the prep ritual that women (and some men) prize dearly, paying close attention to their brushwork to turn their faces into art.

Here’s an example of this makeup technique’s transformative power.

But as well as becoming a common makeup practice, contouring has also enjoyed its own meme makeover. Contour memes are some of the most popular makeup jokes on the internet—and you don’t even know how to contour to enjoy them.

The general gist is there’s a “before contour” image and an “after contour” image. It’s usually such a grand metamorphosis that it tips into the absurd.

before vs. after she contours pic.twitter.com/8ZG4AET1SM

Makeup artist and YouTuber Katelyn Galloway is all too familiar with the contour meme. She’s written about the contour practice in her ebook How the Hell to Wear Makeup and produces tutorials, but she also knows that playing with cosmetics can be a lot of fun—as when she turned herself into Buster Bluth from Arrested Development, or laughs along with the contour memes.

“I think people love contour memes because they usually show big transformations that are not really feasible,” she told the Daily Dot. “Its popularity means that we have a lot of people fascinated by contouring and totally baffled by how to actually do it.”

At the same time, there are plenty of people who use makeup daily, which makes this a common experience; they all understand the struggles of perfecting a smoky eye and other hurdles. Lots of publications have rounded up the best jokes, from Cosmo’s “34 beauty memes that are so on point it isn’t even funny” and Marie Claire’s “20 Beauty Memes That Just *Get* You.“

The contour meme is simultaneously distant and accessible. Those who have never had to paint their mug with makeup are mesmerized by its illusory powers, and who have spent hours in front of a mirror to perfect their face know its capabilities quite well.

Before and after contouring pic.twitter.com/u0dxdBlt3I

Helping add to the popularity of the contour meme are already well-known pop culture references, such as Pokémon, SpongeBob characters, and good ol’ Arthur. There’s also just something so deliciously hilarious about using this meme on some scoops of vanilla ice cream, contouring them into glamor and sweetness through sprinkles and chocolate fudge.

While there are no limits on what you can contour within the confines of the meme, there are some things IRL that cross the line. Galloway explained that she once came across a tutorial on feet contouring, and she literally refused to read any more about this practice.

Putting on makeup might be a choice, but there’s no doubt about the contour meme’s natural beauty.