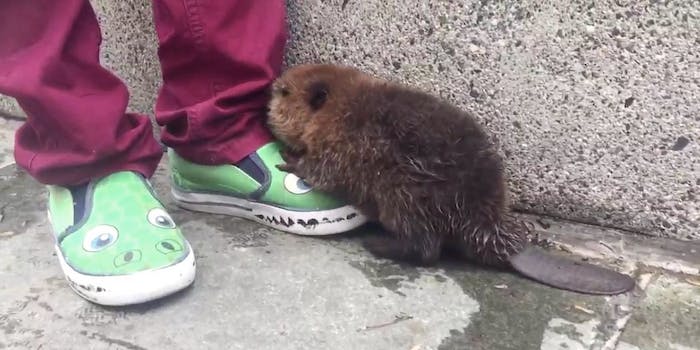 Guess he didn't want to take the metro.

Most people who encounter a critter on public transportation aren’t too enthused—unless it’s a rat eating pizza. But DCist reported an exceptionally adorable encounter on Thursday.

Jonathan Murray, a Washington, D.C. resident who lives close to the Van Ness Metro, captured footage of a fluffy misplaced beaver crawling around by the fountain in the Van Ness plaza.

Murray told DCist, “There was a crowd around the beaver. It was clearly attracted to the fountains and trying to get a drink of water.”

There was also a young boy who bravely ventured close enough for the beaver to get extra friendly!

D.C. Animal Care and Control picked up the beaver and released it back into the wild. Onlookers seemed anything but bothered by its presence. These locals may be accustomed to seeing deer in their backyards, but Murray was astonished to see a beaver up close in the street.

“There’s plenty of wildlife around here…” said Murray. “But I’ve never seen a beaver alive in the street. This is my first time seeing one in the flesh.”