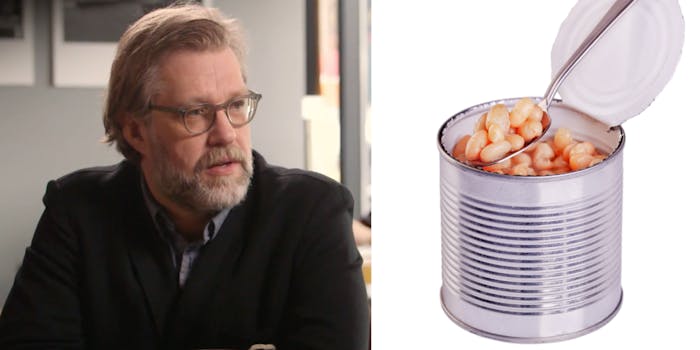 ‘First main character of 2021’: Man dubbed ‘Bean Dad’ after making his hungry child struggle with can opener for 6 hours

He called it a 'Teaching Moment.' Others are calling it child abuse.

Parenting seems like a lot of hard work, with no one-size-fits-all solutions, but there are a few aspects that just about everyone with kids seems to agree upon. To start, if your child is hungry, generally, the appropriate parenting response is to feed them.

Sunday’s main character of Twitter took a different approach, one that’s resulted in him being dubbed “bean dad” and getting absolutely lambasted from all sides for what he clearly believed was a brilliant parenting move.

Musician and podcaster John Roderick shared a story to social media Saturday about his hungry 9-year-old daughter. The kid, he says, wanted some baked beans, but he was in the middle of doing a jigsaw puzzle so he told her to go cook them on a hot stove all by herself.

“She said, ‘How?’ like all kids do when they want YOU to do it,” he said, apparently not realizing that a 9-year-old simply may not have any clue how to cook her own mediocre dinner, “So I said, ‘Open a can and put it in pot.’”

It was apparent from this first tweet that the story would be a long and arduous one, but it somehow managed to sink lower than even the lowest of expectations.

Roderick explained that his daughter didn’t know how to use a can opener, and rather than simply show her before sending her off to play with fire while he remained focused on his puzzle, he insisted she figure it out for herself.

It’s amusing that “Apocalypse Dad” refers to the whole situation as a “Teaching Moment” when in actuality, he failed to do any teaching at all. Instead, as he explained over the course of far, far too many tweets (23, in fact), his daughter spent six hungry hours struggling with a device she had never used, because he ultimately told her that she wouldn’t be getting any food until she figured it out.

By the end of Roderick’s incredibly tedious retelling of how he essentially refused to take care of his kid for a day, people were pretty livid with him.

But some turned it into an actual teachable moment for other people who may interact with children now or in the future, explaining why basically everything he did was wrong and harmful.

Of course, others just wanted to dog-pile on, and it’s hard to blame them. One person even edited Roderick’s Wikipedia page to appropriately reflect the saga. “In 2021, John Roderick had his head shoved so far up his own ass, he belittled his hungry child for hours while the child tried to open a can of beans, then openly bragged about his actions,” it read.

While this could have been a “Teaching Moment” for Bean Dad himself, he’s instead used the backlash to complain about “parenting concern-trolls” and pick arguments with people who told him he was in the wrong for approaching his child’s problem in the way that he did (“You suck, but I’m sure your kids and all the people in your life know this already,” he replied to one early criticism).

But as plenty of people pointed out, perhaps one day Roderick will need his daughter’s help with something, and she’ll be fully justified in telling him he can figure it out for himself.