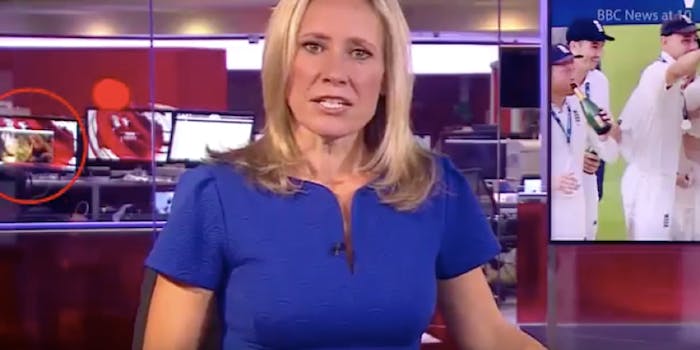 Cricket was never this exciting before.

The BBC’s 10 o’clock cricket report is typically not the most exciting thing on TV, but it got at least a little more exciting Tuesday night thanks to a staff member whose laptop was visible in the background. As presenter Sophie Raworth reported that England had defeated South Africa, he was watching a striptease.

The man watching the striptease hasn’t been named, but the BBC is conducting an investigation into how naked human boobs were accidentally broadcast to 3.8 million bored cricket fans, according to the Independent.

“It beggars belief a sex scene should be played live on air. The employee is on borrowed time when bosses catch up with him. You can’t get away with this sort of stuff anymore,” a source told U.K. tabloid The Sun.

This wouldn’t be the first or last time someone didn’t realize they were on camera in the background of a news broadcast, but the BBC’s anti-nudity policy is pretty clear: “In all BBC output the portrayal of sex, or the exploration of sexual issues, should be editorially justified and treated with appropriate sensitivity.”

Maybe he can justify it by saying he was trying to make cricket interesting again.