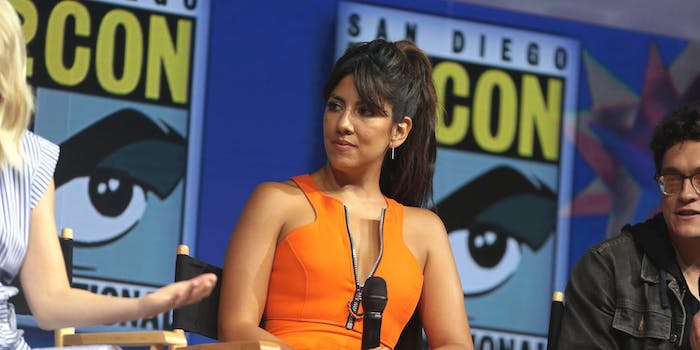 Does Stephanie Beatriz want to be the new Batwoman?

The 'Brooklyn Nine-Nine' star posted a cryptic tweet about Batwoman.

With Ruby Rose unexpectedly leaving the CW’s Batwoman after one season, the show is on the lookout for a new lead actress. Could that actress be Brooklyn Nine-Nine star Stephanie Beatriz?

The speculation kicked off with a cryptic tweet from Beatriz, posted hot on the heels of Rose’s departure from the Batwoman show. On the one hand, maybe she’s just like the rest of us, reading all the Batwoman gossip with rampant curiosity. On the other hand… she’s an actress with a lot of comic book fans in her fanbase, probably aware that many people would love to see her take on the role.

Beatriz is a popular choice for fan-castings, including DC character Renee Montoya (before Rosie Perez was cast in Birds of Prey) and Marvel’s She-Hulk. In fact, a few months ago Beatriz had to clarify that she wasn’t available for Disney‘s upcoming She-Hulk show, because she was still busy filming season 8 of Brooklyn Nine-Nine. But that doesn’t necessarily rule out season 2 of Batwoman, because it could be delayed for a while due to covid-19.

Batwoman‘s showrunners are looking to recast the role with a queer actress. Beatriz is bisexual, is around the right age to play the character, and she’s a popular TV actress who seems interested in superhero roles. An obvious choice for many fans, including longtime DC Comics writer Gail Simone:

Of course, Batwoman‘s creative team haven’t said anything else about what they’re looking for in Ruby Rose’s replacement. The whole scheduling situation with Brooklyn Nine-Nine and the entire 2020-2021 TV season is also a total mystery. So for now, take this casting speculation with a healthy pinch of salt.