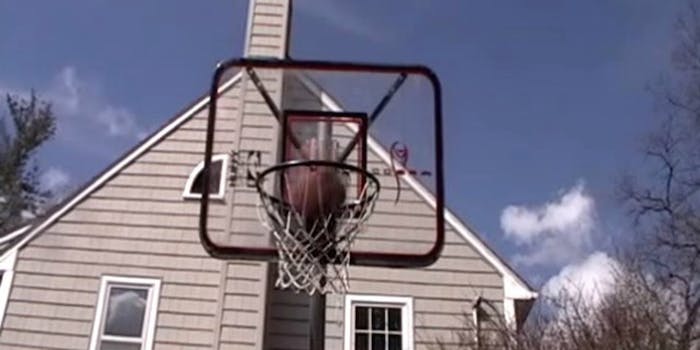 This might be the best basketball trick-shot video ever

With most trick-shot videos, it's fair to question whether the successful shots were edited. This video, though, leaves no doubt.

If you’ve seen one trick-shot video, you’ve probably seen them all. Or at least, you know the basic concept by now.

It’s either a bunch of bros making difficult-looking basketball shots or some sort of pseudo-celebrity attempting the impressive or actual college basketball players carving out some time to work on their non-traditional skills or other bros working on their games in a random gym.

They all have a couple of elements in common. We usually have no idea if these videos have been edited in a way to make the impossible shot sail through the hoop in the most unnatural of ways; and we rarely have any idea how many hours were spent and how much energy was wasted in order to film that one lucky shot that actually went into the basket.

Luckily, a kid who goes by the YouTube moniker Slam the Slammer has diligently answered both questions. Clearly, these shots were not edited.

Actually, I’m totally kidding. Which makes the video below—which was uploaded in 2011, by the way—so funny. Here’s my only question: Were all shots going through the hoop the exact same? It would appear so.

(Quick aside: read the comments below the video. It’s hard to tell if the people who think they’re exposing the video as fake are serious or if there is some kind of meta thing going on where they’re pretending to call out the fakeness of the video because it is, in fact, so damn fake.)

Congratulations Slam the Slammer. With or without the heavy editing, you’ve probably made the best trick-shot video of all time—even if others have toyed with that central gag before.