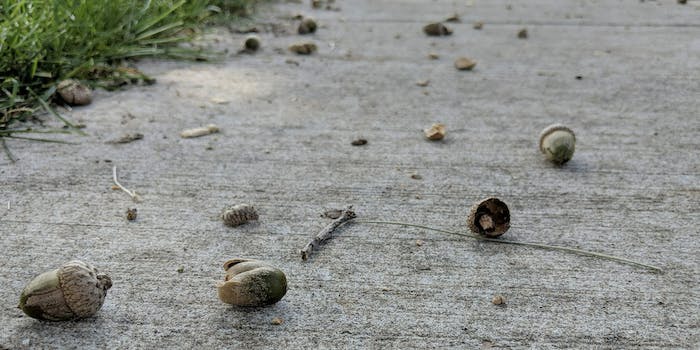 Why hasn't science invented a way to protect the human foot from acorns?

Update 7:31am CT, Oct. 11: The alleged runner, Eric Curtis, tells BuzzFeed that he is not a competitive barefoot runner and admits he made the post just to troll his neighbors.

Where would I find enough leather
To cover the entire surface of the earth?
But with leather soles beneath my feet,
It’s as if the whole world has been covered.

So said Shantideva, a Buddhist monk who lived in India during the 8th century. It’s a good metaphor. One, apparently, some might consider taking literally.

Such as this man in Minneapolis, who posted to his community Facebook group that he needs his neighbors to get out and sweep the acorns off their sidewalks, so that he can going running barefoot.

“Hey Northeasters!” Eric Curtis wrote in the post. “Lately I’ve noticed that the sidewalks have been LITTERED with acorns. As a competitive barefoot runner, this makes my training sessions very difficult. I’m not sure if many of you have stepped on acorns with no shoes before, but it is quite painful!”

Yes, it seems a little ridiculous that this man expects everyone to keep acorns off the sidewalks just so he can run around with no shoes on, but maybe, just maybe, a few people might have obliged him in the spirit of neighborliness.

“So this is just a friendly reminder to please keep your sidewalks clear of any acorns or other debris that might injure those whom are active members of the barefoot running community, including myself. I would hate to have to complain to the City about this, so just wanted to give everyone a heads up!”

So now he’s actually threatening to call authorities if people don’t sweep the acorns off the sidewalk for him? To cap it all off, here’s how he ends the post:

Clearly, no one is going to help this guy out now. In fact, he’s getting roasted pretty hard on Facebook. The group is private, but luckily member Alex Conover, a photographer and designer who lives in the neighborhood, grabbed a few screenshots and has shared them to Twitter. Thus far, his post had been shared almost 10,000 times and like over 40,000.

This post in my neighborhood FB group is getting absolutely destroyed pic.twitter.com/8i0wAGP0qO

This helped the man realize he was being pretty ridiculous. He apologized for making such a crazy request and passive-aggressively threatening people. He says he plans to try to be a better person in the future.

Just kidding. He filed a police report accusing the 27,000 person group of littering and cyberbullying.

HE REPORTED THE ENTIRE "I LOVE NE MINNEAPOLIS" GROUP TO THE CITY FOR CYBERBULLYING LOL pic.twitter.com/dJVOAavxCC

It turns out this isn’t the first wackadoo post made by the same man. Check out this one where he once again makes a nutty request and ends it by being a dick for no reason.

I have just learned that this guy has already gained notoriety in our neighborhood group for this previous post pic.twitter.com/TNky8MRroc

“People have asked if I think this is a troll or not… I prefer not to know,” Conover told the Daily Dot via email. “It’s more magical that way. I’ve seen a few mentions where people imply that they tangentially know this guy, and he’s serious.”

Serious or not, Conover says he’s not too worried about the man retaliating.

“I am slightly concerned about him trying to sue me because of the tweets,” he says, “but I keep assuring myself that he posted the comments to a group of more than 27,000 members. I’m not too worried.”

“It’s always a cranky group,” Conover explains, “because Northeast is a mix of millennials who have moved into the cool area (lots of good food, breweries, and music) and people from the traditionally European immigrant, blue-collar background that had previously occupied the majority of the neighborhood. Facebook is usually mostly just baby boomers yelling about petty issues, so I tend to avoid it in general. I do love a good screenshot though, so I decided to tweet this one out after sending it to a few friends.”

As for the acorns, Conover says he lives on a street with few trees so he hasn’t seen that many on the sidewalk.

So what has he learned from all of this?